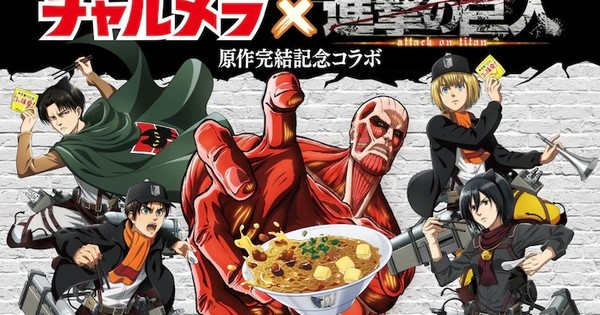 The Attack on Titan series is commemorating the conclusion of the manga by teaming up with Myojo Food’s Charumera for a limited-time campaign. The Attack on Titan The Final Season production committee has released a key visual drawn by the anime’s staff to be featured on the packaging.

Those who purchase the package or cup Charumera ramen between May 17 to July 16 will go into the running to win various prizes. More information about the prizes and how to enter will be released on the Myojo Foods website at a later date.

Hajime Isayama‘s Attack on Titan manga ended in the May issue of Kodansha‘s Bessatsu Shōnen Magazine on April 9, after 11 and a half years of serialization. The series has inspired a popular television anime, many spinoff manga and novels, several spinoff anime, video games, and a live-action film project.