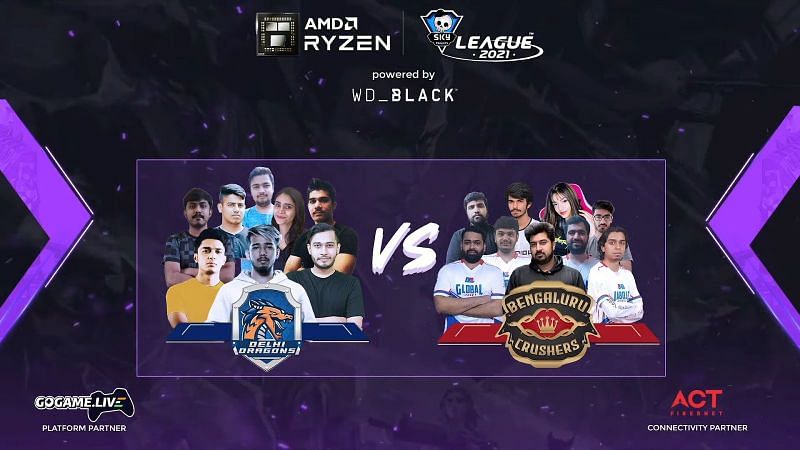 Day 6 of Skyesports Valorant League 2021 featured another 3-0 series in the tournament as Bengaluru Crushers beat Delhi Dragons in a one-sided fashion.

Delhi Dragons, are riding the momentum of two series wins, placing them at the top of the league table. Bengaluru Crushers came into the match with one loss in their only match in the league against Hyderabad Nawabs on the first day.

Although Bengaluru Crushers have powerhouse performers studded in their lineup, beating the Delhi Dragons 3-0, that too, in such dominant fashion, was quite surprising, to say the least.

As day 6 concludes, Delhi Dragons are still on top of the table, but Bengaluru Dragons have clawed their way into the upper half.

Following the map veto process, the three Valorant maps that were chosen by the two teams for the series were:

Bengaluru Crusher got an excellent start by winning the pistol round. Bengaluru’s SkRossi got a Vandal in the second round, leaving other players on SMG duty. They secured the second round as well. Delhi Dragons seemed close to win the third round with full buy, but were stopped by LightningFast’s fantastic display of Cypher skills.

Delhi Dragons made a comeback in the fifth round, courtesy sMx’s magnificent Sova plays. In the sixth round, Delhi’s Badman got a triple kill with Killjoy at B site securing them the round. The seventh-round saw Delhi’s Hikka putting on a show with Raze. That accompanied the firepower of Badman, who again secured them that. Delhi again executed a great site take to secure the next round and made the score 4-4. The 9th round was a ‘flawless’ victory for Delhi Dragons as they cleaned up Bengaluru without losing a single player of their own.

Bengaluru rode on the shoulders of SkRossi’s Operator in site B with a comeback. That gave them a much-needed round win making the score 5-5. Bengaluru won the 11th round with that momentum, but Delhi came back in the 12th round making the score 6-6.

Then on, Delhi Dragons won four more rounds, and the 10-6 score created almost the impression that Delhi will secure map one. But, in the 17th round SkRossi showed why he was one of the most valuable players in the Indian Valorant scene. Bengaluru won the eco round and made it clear that they were still in the game. They went on to win the next four rounds making the score 10-10.

Delhi Dragons won round 21 in the Valorant match, pulling ahead of Bengaluru. But Bengaluru clasped their way back into the series. Following more back-to-back rounds the game went to overtime where Bengaluru took the series 14-12, thanks to SkRossi’s fantastic executions.

Delhi got a good start winning the first round. Bangalore attempted a force buy in the second round trying to get back into the Valorant match then and there, but it was in vain and Delhi Dragons won.

What proved to work for Bengaluru was their Sheriff buys in the next round. With excellent execution on Site A in Haven, Bengaluru won the next rounds carrying the momentum they had created with the eco round win. Delhi Dragon came back strong in the sixth round, making the series 3-3. Delhi’s sMx on Sova, Rawiful on Jett, and Sherlock on Brimstone put up an amazing performance helping them secure the next four rounds. The score stood 7-3.

Bengaluru came back into the series winning the 11th and 12th round. In the 13th round, Delhi’s Sherlock on Brimstone clutched the 1v1 last person standing battle with her Frenzy against Bengaluru’s Godvexy. Following the next two back and forth rounds, the score stood 9-6.

Bengaluru put up an amazing display of Valorant skill across the whole team in the next few rounds. They won four consecutive rounds to make the series 10-9 in favor of them. Delhi Dragons won the next two rounds, making the score 11-10, but Bengaluru came back again in the 22nd round thanks to Skillz’s amazing gunplay with Phoenix. With that momentum, Bengaluru won the next two rounds, giving them the 13-11 win on Haven, and making the series score 2-0.

Delhi only managed to win the 7th and 10th rounds in the whole map. Bengaluru seemed unstoppable with both of their duelists, putting on a show. LightningFast was on point with his Viper as well, with the toxin walls giving Bengaluru cover for their back-to-back A executes. The 13-2 series was an absolute stomp and Delhi Dragons seemed disoriented throughout the map. All of the players in Bengaluru had kills in the range of 13 and 16.

After day 6 of Skyesports Valorant League 2021, the score table looks like this: