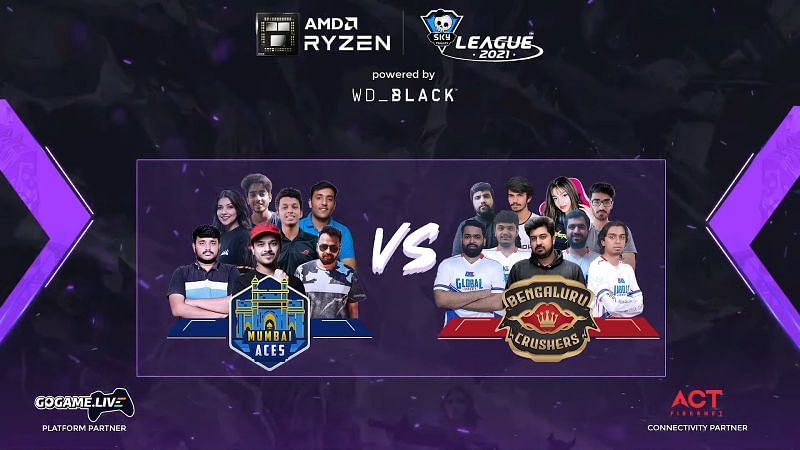 Bengaluru Crushers and Mumbai Aces both came into today’s match with one win and one loss to each of their names. It was a very important match between Mumbai and Bengaluru, deciding which team will reach the upper echelon of the Skyesports Valorant League 2021 point table.

The players that were fielded by the teams for today’s Valorant series are:

After the map veto process, the three Valorant maps that the two teams decided to play the series on were decided, and they were:

Following two wins in the first two rounds, Bengaluru Crushers’ SkRossi bought Operator on his Jett in the third round itself. Bengaluru Crushers were a little too rushed with their domination as Mumbai Aces came back into the match and made it 2-1. With that momentum, Mumbai Aces won three more rounds, making the score 4-2 before, in the seventh round, SkRossi on his Jett showed up with the Judge shotgun and won that round, with Skillz and HellrangeR on his side. Then on, Bengaluru won all rounds until the side switch, making the score 8-4.

Bengaluru won the first two rounds following Mumbai winning the third round of the half. The score stood at 10-5 in favor of Bengaluru. Then on, despite some valiant effort from the Mumbai players, Bengaluru seemed solid enough to win the map 13-9. It was a SkRossi show throughout.

It was total dominance from Bengaluru. SkRossi again topped the kill count with his signature Jett, with HellrangeR and skillZ not to far behind with their Phoenix and Omen respectively.

Following the slaughter-fest in Haven, Bengaluru Crushers drafted quite an unusual team composition for their third map, Ascent. They picked zero duelists for their team comp. SkRossi and SkillZ, who traditionally plays duelists for their lineup, picked up Viper and Killjoy respectively, while the others picked Astra, Sage, and Sova.

Bengaluru again seemed like they were on a roll as they won the first five rounds. It was only in the sixth round of the Valorant match that Mumbai aces mustered to win their first round in the third map. After the first half, the score was 9-3 in favor of Bengaluru Crushers.

Mumbai won three more rounds in the second half, but Bengaluru did not take long to close the match and thus the series, with a score of 13-6 in the third Valorant map.

This time, SkillZ topped the kill score with 25 kills on his Killjoy, with SkRossi closely behind him with 21 kills on his Viper.

Bengaluru Crushers made their way to second place in the points table following today’s 3-0 win. Tomorrow, on its day 9, Skyesports Valorant League 2021 will have Rajasthan Strikers facing off Chennai Clutchers.