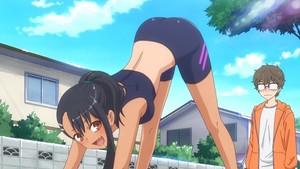 Never let it be said that Miss Nagatoro isn’t looking out for her Senpai. Obviously her toying with her easily-upset upperclassman is something she personally enjoys (with Senpai himself getting his own particular, uh, fulfillment out of it) but there’s also always been the air of one of those self-improvement fantasy shows surrounding Don’t Toy with Me, Miss Nagatoro: the indulgence of believing a cute girl could take it upon herself to airdrop into your life and encourage you to grow as a person. That such a motivation for social encouragement also lines up with an enjoyment of being bullied specifically for being such an awkward goober just converges to give the story its very specifically-catering flavor. And now an ultimate arc is laid out as we reach the climax of this show: Senpai shouldering all of Nagatoro’s abuse over these past few months has been plenty of fun for both of them, but will we now see the broader effects on his life this odd relationship has had on him as a person?

That’s a question that doesn’t come up until the surprisingly seismic second half of this week’s episode, because the first half is all about reminding us of how far we, Nagatoro, and Senpai have all come. It’s rewarding, as far as long-term relationship development goes, to see how Nagatoro’s motivations for messing with Senpai have evolved. No longer viewing him simply as a fun distraction, she now finds herself frustrated by his lack of confidence and effort in activities like the marathon she observes him training for. She’s been trying to bully this guy into getting up the nerve to take the initiative with her for ages now, and that’s never going to happen if he can’t even work up the energy to run a few laps. For all her vicious mockery of him on the subject of his shortcomings, you can still glean a sense of how much she actually believes in him, in her utter refusal to listen to his whining self-deprecation.

One neat effect of this situation is in how it realizes an opportunity for the ‘old’ Nagatoro to come back for a segment. The more furious verbal abuse (complete with her classic ‘Maggot’ nickname for him) makes an extremely pointed return here; it functions on multiple levels, first of all reminding us of how effectively this series can deploy that kind of content for those that are tuning in specifically for that kind of precision-targeted material, but also demonstrating how Nagatoro and Senpai have grown all-too-aware of this bizarre arrangement being what the attraction in their relationship is largely built on. “Come after me if you’re that upset” she taunts, knowing exactly how she’s getting his motor running. Apart from everything else, I’ve always respected Miss Nagatoro for being unpretentious about precisely what it was doing as a show, and this whole sequence – interspersed with surprisingly picturesque backgrounds, more conventional fanservice shots of Nagatoro in her exercise outfit, and a cheap-but-funny gag about a Nagatoro/Yoshi Fusion-Ha – just represents a shotgun blast of everything that’s generally worked about the series.

It’s a status-quo demonstrating exercise that the series needs to take us through before deploying its second half, which is all about shaking up the situation with Senpai that Nagatoro has cultivated as his bizarre combination dom-slash-life-coach. The pair’s odd ongoing game of horny shame chicken escalates to Nagatoro assisting in Senpai’s efforts towards the art club’s upcoming school festival contribution right before we have the chance to ask “Wait, have we ever seen anyone else in this art club?”. Senpai’s loner nature, it turns out, may have been reinforced by interactions he had with people even before Nagatoro drop-kicked her way into his life. Case in point: the appearance of an out-and-out series antagonist in the form of the art club President, and fair play to Senpai, I’d be intimidated by Nana Mizuki too. It’s legitimately fascinating to see Senpai, whom we’ve observed cultivating a real relationship and rapport with the sharp-tongued gals that regularly inhabit his club room, revert to his soft-spoken, deferential old self in the presence of this senior. Suddenly Miss Nagatoro comes off like it’s always had more salient observations to make on the nature of power dynamics when they’re someone actively oppressing another versus, you know, just doing it for kinky reasons.

The tonal shift in the introduction of this stuffy cop for Nagatoro and the others to actively defend Senpai from is fully intentional, as reflected in the lighting and presentation of the whole scene suddenly illuminating in ways we haven’t really seen before. I did already mention how everything in this episode looked just a bit nicer than usual. The ultimatum of shutting down the art club if Senpai can’t win a festival vote-off against President Nana is a somewhat trite development, sure, but it creates this amusing opportunity for Nagatoro and the other gals to jump in and really fight for Senpai in a way it feels like he’s earned. It’s a natural continuation of the way we’ve seen Nagatoro come to Senpai’s defense in the previous few episodes, culminating in her confidently assuring him “You’ve got this” at the end. It’s a full-circle demonstration of the self-confidence she was trying to instill in him in the exercise program at the beginning of this episode, and I daresay, a sign that the Miss Nagatoro show might really end up going some places before the end of its run.