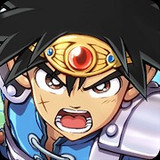 Featuring a take on the Dragon Quest: The Adventure of Dai anime and an original scenario supervised by manga author Riku Sanjo, the Dragon Quest: The Adventure of Dai – A Hero’s Bonds mobile game is on the way to iOS and Android devices around the world this year. Following up on the March announcement, Square Enix is here with a new trailer to showcase more of the team action-RPG’s gameplay.

Pre-registration is currently live on Google Play, and you can learn more about the game and its three-lane battles on the official website.