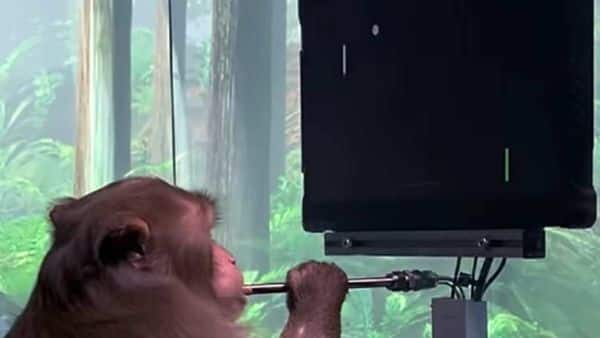 Billionaire Elon Musk’s Neuralink is getting closer to developing actual brain-machine interfaces. The company has posted a video on YouTube, which shows a 9-year-old macaque named Pager playing the video game Pong. Neuralink says Pager is playing Pong using nothing but its brain activity. The video starts with Pager navigating an on-screen cursor and transitions to him playing Pong on the same screen.

According to the video’s narration, the company trained the macaque to manouevre a joystick using a banana smoothie reward, which is delivered through a metal straw. This technique was used to train the monkey to play video games. So, what we see in the video is the monkey doing the same, except that the joystick is not connected to the system now. The Neuralink devices are apparently implanted in the monkey’s brain, in the motor cortex which is the part that controls limb movements, etc., and it is relaying the information to the machine by reading the monkey’s brain activity.

Neuralink says its eventual goal is to use this technology to allow people with paralysis to interact with machines using their brain activity. “First @Neuralink product will enable someone with paralysis to use a smartphone with their mind faster than someone using thumbs,” Musk tweeted on Friday. “Later versions will be able to shunt signals from Neuralinks in brain to Neuralinks in body motor/sensory neuron clusters, thus enabling, for example, paraplegics to walk again,” he added.

Also Read | Why insolvency pros are living on the edge

However, the company is evidently far from bringing this technology to fruition, otherwise it would have been publishing a scientific paper instead of posting a YouTube video. Experimental technologies like this are usually documented in papers, which allows other scientists to verify their authenticity and find possible gaps in the systems.

Musk had first announced Neuralink in 2019, showing the world some of the company’s eventual goals. The company isn’t the only one working on brain-machine interfaces either. Such systems have been widely accepted as the future of human-machine interactions in the future, once mobile phones and laptops give way to ambient computing devices that will lie all around us.

In fact, Facebook recently showcased a wrist-based device that could read signals being sent from the brain to a person’s hands through the neurons. Facebook’s system hopes to allow users to interact with screens that can be built into walls and other surfaces, through gestures.