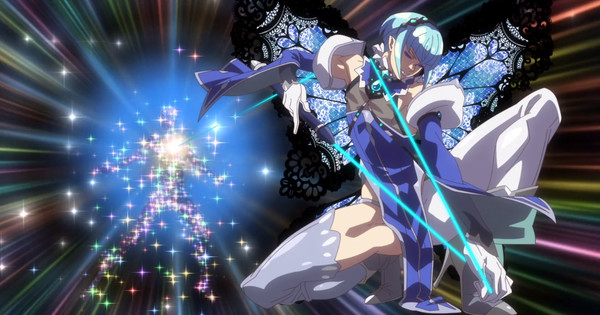 Never has an anime been more aptly described as flamboyant. It’s Fairy Ranmaru‘s unapologetically loud sexuality that first got me to take note during Preview Guide and when voters proved themselves too cowardly to rank it within the top 10, I decided to rectify the situation myself. Like the magical boys of Bar F, you cannot control me. We’re going to follow this muscular manshow until someone inevitably yells, “Daddy!”

Personally, my favorite part of Fairy Ranmaru so far is any attempt to explain the baseline premise makes me sound like I’ve spent too much time on fanfiction.net. Seemingly high-school aged boys who are actually fairies are sent from another realm to obtain “attachment” from unsuspecting humans. When they aren’t playing schoolboys, the fairies hang out at Bar F with their inscrutable magical mascot. Each of the characters comes from a different elemental fairy clan and are adherent to specific set of morals that are lifted directly from Buddhism. So all-in-all these are magical elemental fairy high school boy monks that transform into overtly sexual versions of themselves (BULGES) in a Utena-like transformation sequence. Is everyone still following?

Cause if you’re not, that’s ok. I’m honestly a little scrambled on the audience for this one. See, the transformed character designs scream GAY at me in the most campy way while other casual encounters in the episodes whisper “but maybe ladies?” I mean, even the monk bit explicitly lays out that these fairy guys absolutely cannot bone women. Only each other. See, early Buddhist scripture didn’t have any of that stigma against homosexuality; “sexual misconduct” was regarding relations with betrothed or married people and those underage. Interpretations changed over time but when it comes to Japan specifically, there are stacks of historical accounts that show that male Buddhist monks were openly gay. Unfortunately, this was also tied to closely to the practice of keeping chigo, similar to the systems better known in Greek and Roman culture.

So, circling back, this seems like a product made to appeal to fujoshi. The characters are ripe for shipping but there’s enough textual encounters that maybe that buff fairy guy might be into you, too.

Oh, yeah, but the plot? This was the area I was most worried about. Episode 1 focused on cyberbullying and wasn’t particularly thoughtful or unique in its depiction. The only element I can thank it for is giving us the most cursed Twitter logo I’ve ever seen. Initially, I thought that was fine. That the “problem of the week” would just be window dressing for more absurdity. Then episode two happened and it was oddly sincere and, dare I say, rather cutting about the manga industry, Shonen Jump in particular, and gendered anger.

The episode focuses on Homura, our fire-centric fairy. His character type is pretty standard for those associated with “fire” as are the stereotypes about his clan. The Ignis clan is regarded as hot-headed and emotions are a ‘no-no’ for fairies. Homura’s own father was punished (executed??) for possibly going too far in some kind of emotional display, leaving his son with a chip on shoulder about heroes since he had admired his dad as such. In the episode, he’s tasked with helping a manga artist who is being harassed by her male editor. She publishes her work in Weekly DUMP (lol) but according to her editor, the series is being received badly online. When Homura stands up for her, she’s taken with him and wants him to be the model for the protagonist of her new story.

Honestly, I don’t think the artist is ever given in a name in the episode but the important thing to remember about her is when she’s confronted by her editor and mistreated, she’s often reduced to tears. She turns in her new draft, her editor shits on it, and she later sees that it’s published with a young, magical girl lead instead. Apparently her editor “fixed it” for her, then summarily fired her. He’s later seen telling the higher ups that it was her idea to have a female protagonist.

I don’t know how much I should be reading into this but for those who don’t know Weekly Shonen Jump has had female manga creators but it has never had a female editor. The management has stood by this decision claiming that male editors are needed to understand the magazine’s male audience. Apparently Fairy Ranmaru has something to say about that, because it’s revealed that the male editor is self-absorbed about his own stories and preferences and when Homura enters the in-between space to defeat him, he has to battle Di Gi Charat-esque creations who say “moe” over and over again. Homura has to transform and defeat moe. I’m not kidding.

Then, for the killing blow, he tells the female creator to unleash her anger! The episode is called “Wrath” after all, but essentially Homura tells her stop defaulting to tears and to get angry at how she’s being treated. She tells the editor his moe creations are weird and gross! The day is saved! The editor is fired for power harassment and the manga author gets assigned a female editor who graciously accepts her work for publication! Fairy Ranmaru, what are you doing, you just came out and said it, huh?

And if I haven’t already dedicated enough words to this show that I at first thought was simply “fucky,” episode three adds some deeply wtf pathos as we turn our attention to Uruu, the “perfect” water fairy. Uruu’s clan is tasked with administration duties in the fairy world and have always maintained a perfect image. What that meant for little Uruu was cold, distant parents that stymied any kind of emotion. In short, Uruu is deeply repressed and the polar opposite of Homura, leading the two to often bicker.

I don’t think I’ve be wrong if I described Uruu’s upbringing as abusive. He was punished in a particular chair when he failed to meet his parents standards and also internalized an inability to cry. He’s also locked away a particular memory of running to tell his parents that took first in his class. He opened the door that lead to chair room but we only see a bit of reflection in his eyes of what he may have saw that traumatized him.

I’m pretty comfortable saying he walked in on his parents in the midst of some bondage play in his punishment chair and this has…affected Uruu. Despite his upright persona, Uruu wants to be noticed (by his parents) even if it means punishment. During the battle with the idol and his spurned girlfriend, Uruu becomes aware of this desire when he finds himself in a situation ala The Fisherman’s Wife, defeats the idol, and then also steals the attachment from the client which isn’t allowed. He has to be punished for it. By being bound in a chair. As he wanted. WTF is this show, my friends? Ranmaru comments that he’s “crying on the inside” so I’m not sure if I should sign off on this as good kink or not, I’m kinda worried for Uruu!?

Also the idol is gay now.

Can I even rate this show?

for entertaining me from start to finish even if that meant saying “WTF?!” a lot.