I had wondered who might be the first to face some reckoning after The Falcon and the Winter Soldier episode 3 — and it turned to be Walker, before Helmut Zemo (Daniel Brühl). Befitting his intellect, the Sokovian terrorist engineered an El Chapo-style escape right under everyone’s noses. That essentially means he’s going to be the main villain of sorts from here on out. After all, Brühl deserves some facetime (or rather, the lack of it) in that glorious purple mask. What remains to be seen is whether he’s able to recruit Karli Morgenthau (Erin Kellyman) to his cause somehow.

The Falcon and the Winter Soldier episode 4 — titled “The Whole World Is Watching”, directed by Kari Skogland, and written by Derek Kolstad — begins six years ago in Wakanda, with Dora Milaje’s second-in-command Ayo (Florence Kasumba) reciting the activation words to the Winter Soldier/ Bucky Barnes (Sebastian Stan). Bucky is afraid of what will happen, and as he hears the words, The Falcon and the Winter Soldier episode 4 flashes back to the traumatic moments from his past (which also function as a neat reminder for audiences). But as Ayo utters the final word, it doesn’t turn him into the Winter Soldier. Bucky breaks down and cries, with Ayo telling him: “You’re free.” This scene feels like it partly exists for those who may not know about Bucky’s time in Wakanda.

Back in present day in Riga, Latvia, Ayo wonders why Bucky and Co. have freed Zemo, given what he did to Bucky himself, let alone his bombing of the UN that killed the then-Wakandan King T’Chaka. Bucky says they need his help and that he is a means to an end. Ayo says they have eight hours before they — I suppose she’s referring to the Dora Milaje — come for Zemo.

Bucky then arrives at Zemo’s place where they discuss how to approach Karli. Zemo believes she is a supremacist and that the Super Soldier Serum has corrupted her, as it always does for everyone. You’ve to kill her or she’ll kill you, he warns. But Sam and Bucky want to find a peaceful way to resolve this. Bucky points out that the serum didn’t corrupt Steve Rogers (Chris Evans) — the former Captain America — but Zemo rightfully points out that there is no one else like Steve. Still, because Sam and Bucky are calling the shots, they go the quiet way of handling Karli. That includes looking into the late Donya Madani (Veronica Falcon), whom Karli tried to save. Donya was a pillar of the community, Sam notes, and that means the whole community will come to pay her respects.

Loved the Zemo Dance From Falcon & Winter Soldier? Here’s 60 Minutes of It

Except no one wants Sam’s help, and they all avoid Bucky as well. Zemo turns out to be the smartest among them (once again), as he approaches a bunch of refugee kids while singing a nursery rhyme — this is going to be the next viral Zemo moment, isn’t it? — and offers “Turkish delights” to said kids. In return, Zemo gets the info they are looking for: the time and place of Donya’s funeral service. Zemo doesn’t tell the others about what he’s learned yet though.

Back at Zemo’s place, Bucky laments that they failed to get any info. Sam points out that during the five-year Blip period, the world ripped up barbed wires and restrictions because they needed help from the ones who survived Thanos’ Snap. The world came together as one, he notes. But then in an instant everything went back to normal. And because all the people returned, those borders were drawn back up. That is what annoys Karli’s Flag Smashers, because the very people who helped have now been thrown out on the street. It’s why they don’t care about the Avengers, who are aligned with a global system that’s counter to what the refugees believe in.

There’s a miniscule inclusion in The Falcon and the Winter Soldier episode 4 for Sharon Carter (Emily VanCamp) whom Sam calls for assistance. She has a satellite or two, she says, that can help track Karli and her whereabouts.

Meanwhile, Walker and his best friend Lemar Hoskins (Clé Bennett) show up in Latvia, having tracked them down again. Walker wants to go in hot and capture Karli, but Sam and then Lemar convince him to take the quieter route: to try to reason with Karli. Zemo’s young friend from earlier leads them to the funeral. As Sam walks in alone, Walker handcuffs Zemo now that he has fulfilled his role. Inside, Karli is leading the service for Mama Donya — as they call her lovingly — before she spots Sam walk in. After the crowd clears, Sam and Karli have a heart to heart. He points out her extremist methods, she notes she’s railing against the global power brokers (like the GRC) and that Sam isn’t her enemy. They agree their causes are aligned, but Sam is opposed to Karli’s ways.

But before they can make any real headway — if that was even possible — the impatient new Cap interrupts and blows the whole mood. Karli believes Sam had always planned for this to happen. She makes a run for it, leaving all of them behind. She’s eventually found by Zemo — wait, how did he free himself? — who shoots her in the stomach. As she drops to the ground and takes cover, the Super Soldier Serum vials she’s carrying are scattered on the floor. Zemo destroys them with his boots — allowing Karli to escape — but he’s then knocked out by Walker who arrives on the scene. Walker finds an unbroken vial and pockets it. At this point, every The Falcon and the Winter Soldier viewer knows what’s going to happen (sooner rather than later).

The Falcon and the Winter Soldier episode 4 also makes room for another nod to the Power Broker, whose reach and image has been slowly built up during the Marvel series’ run. Karli gets a SMS threat from the Power Broker, which prompts her fellow Flag Smashers to point out that they can’t fight two wars — one with Cap/ Sam and the other this — at the same time. Karli says she has a plan. 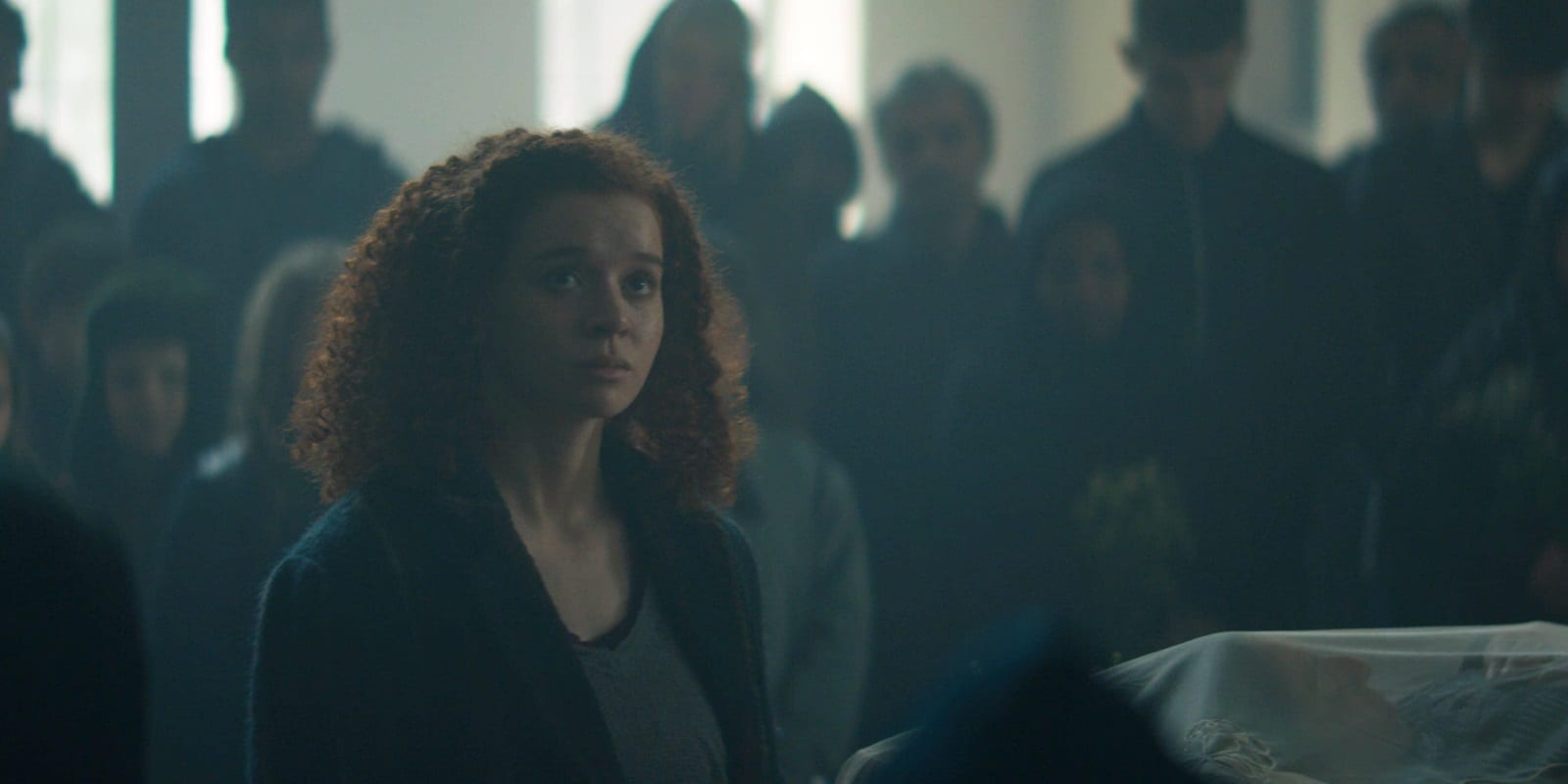 We’re back again at Zemo’s place, where the trio — Sam, Bucky, and Zemo — debate how things did not go according to plan and how they can fix matters. Walker bursts through the door, demanding Zemo be handed over to him — he did apprehend him earlier in The Falcon and the Winter Soldier episode 4 — but Sam rightfully points out that Zemo has been a bigger help than Walker who let Karli get away with his impatience. Sam and Walker come close to bows but they are interrupted by a third party: the Dora Milaje. They have come to collect on the eight-hour bill, as promised to Bucky. Walker gets into an argument with Dora Milaje as well, which soon turns into a physical altercation. Bucky is happy to watch, as is Zemo, but Sam then prompts him to get involved.

It’s funny how everyone is fighting over Zemo while the man himself is not at all involved. He’s just standing in the back and watching them go at it, which is also what he did on Captain America: Civil War. Zemo is certainly the smartest one in the room. Amidst all the chaos, Zemo picks his moment and locks himself into the bathroom. He’s getting away, isn’t he. Outside, the fight comes to an end. Ayo disables Bucky’s arm with a few quick movements (oh my, what a power move) and the vibranium hulk drops to the ground. One of the other Dora Milaje drives a spear through Cap’s shield and locks him in place. As they clear out, Walker notes to Lemar that they weren’t even Super Soldiers — and he still got a beating. He’s a step closer to taking that serum, you can tell.

The Dora Milaje open the bathroom door and discover that Zemo has indeed escaped — through a hole under his bathtub no less. It’s a cheeky reference to the antics of Mexican drug lord Joaquín “El Chapo” Guzmán who had a habit of digging tunnels and escaping out from holes in the floor. Sam notes as much on The Falcon and the Winter Soldier episode 4.

Later, we find Walker and Lemar at a Latvian café. Walker asks his buddy if he would take the serum if he had the opportunity, and Lear replies in the affirmative instantly. Wouldn’t you be concerned about how it changes you, Walker wonders. Lemar believes that power really makes more of what you already are, pointing to Steve and Karli as examples. Walker doesn’t reveal that he has a vial, but this seems like the moment that he has decided to insert it in his veins.

The Falcon and the Winter Soldier episode 4 brings back Sam’s sister Sarah Wilson (Adepero Oduye) for a brief moment as she gets a call from Karli, who wants to meet Sam alone (once more) and threatens Sarah’s kids (in what feels entirely unnecessary, but cooked up by the writers to push her more into villainous territory). Sam meets with Karli and brings Bucky with him, but their meeting is once again interrupted by Cap’s arrival. That spills into an extended fight scene between the Americans and the Flag Smashers, which also confirms that Walker has taken the serum given the feats he is now performing. The action sequence culminates with Lemar trying to protect Cap from a knife attack, and ends up paying the ultimate price as he is thrown into a pillar.

The Falcon and the Winter Soldier Episode 3 Recap: I’m Here for Zemo 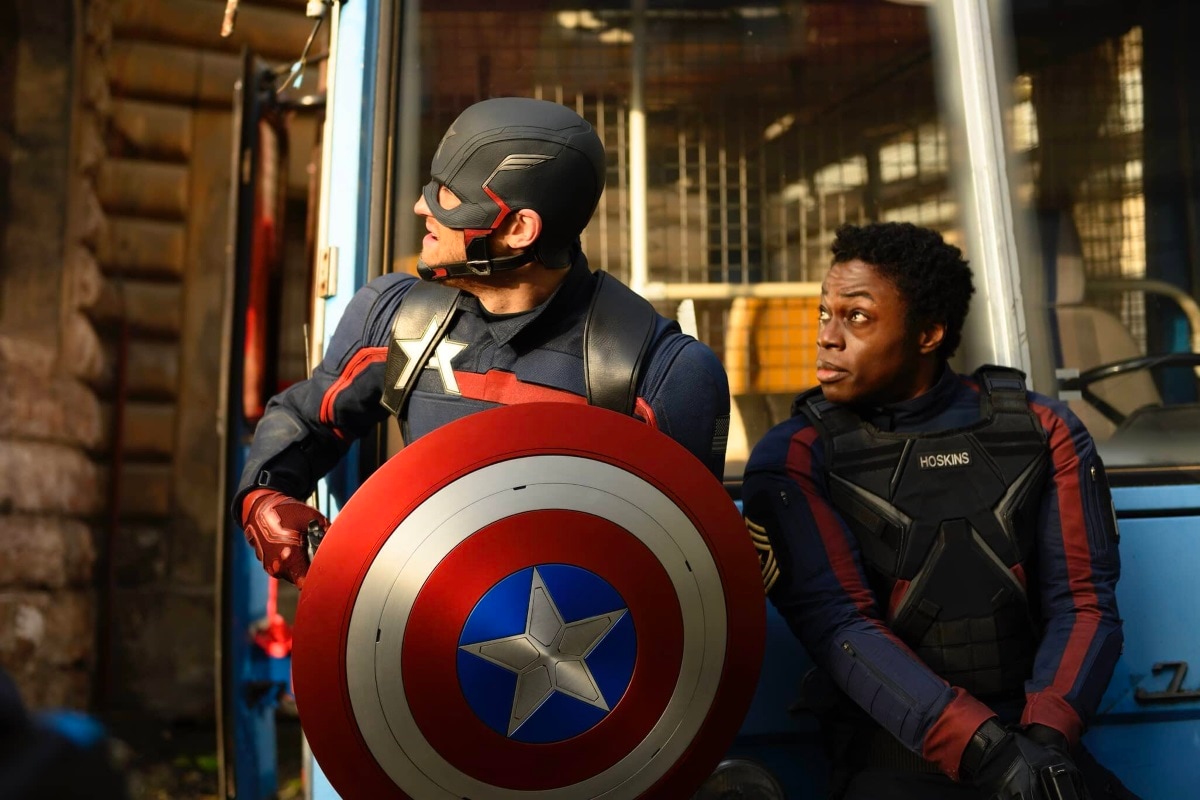 Everyone stops fighting for a moment — it’s almost as if no one considered the possibility of someone dying; you’ve super strength and some incredibly powerful weapons what did you expect? — as Walker goes to check on Lemar. Yep, he’s gone. That turns out to be the moment that pushes the new Cap over the edge, as he chases after Karli and Co. Walker wants to stop Karli, but unable to find her, he traps one of her fellow Flag Smashers. And then on the base of a fountain in a circle in the Latvian capital of Riga, Walker drives his shield into the guy repeatedly, while onlookers gather around him and start filming him. But he pays them no heed and murders him, with his blood coating Cap’s shield.

It’s shocking for a number of reasons. Marvel doesn’t show blood in its movies and TV shows because it prefers the family-friendly PG-13 (U/A in India) rating but this easily goes beyond that. The final shot in The Falcon and the Winter Soldier episode 4 also comments on the bloody legacy of the USA, one that has kick started several wars and killed countless civilians in the name of peace and freedom. And of course, it’s distressing to see the shield dripping blood. Steve must have got blood on the shield during his long reign as Captain America, but his actions felt justified. This is far from it. I don’t think there’s any way going back from this for Walker.

The Falcon and the Winter Soldier episode 4 is now streaming on Disney+ and Disney+ Hotstar. New episodes release every Friday around 12:30pm IST/ 12am PT.