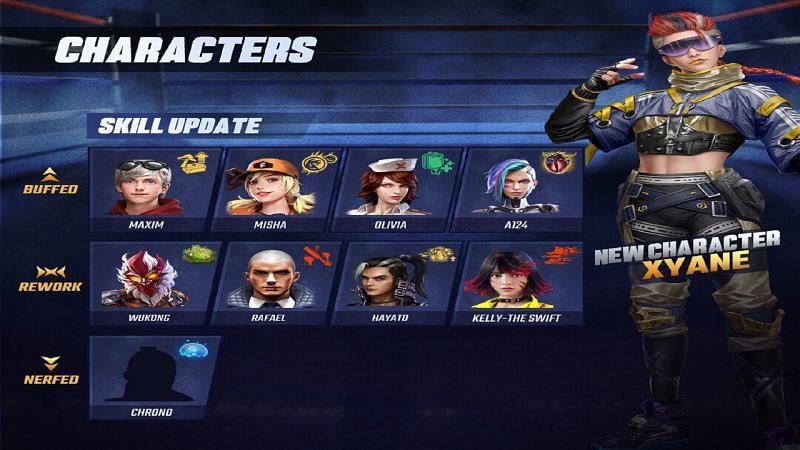 The much-awaited Free Fire OB27 update will go live today, and its patch notes have been released by Garena.

A host of new features, including two new characters, a weapon and the Bermuda Remastered map, will make their way into the game with the update.

Character balancing is one of the major changes that are set to be made in the upcoming update. This article lists the character changes that will be made once the Free Fire OB27 update arrives.

As per the official patch notes, several changes will be made to the abilities of the following characters:

Chrono’s Time Turner ability will receive a significant nerf. The radius of the force field will be increased to 2.5. Meanwhile, the ability duration will be reduced to 3/4/5/6/7/8 at the different levels.

Rafael’s Dead Silent will be a passive ability once the new update arrives. It will have a silencing effect when players utilize snipers and marksman rifles. Opponents that are hit and downed will suffer 20/23/27/32/38/45% faster HP loss.

Also read: How to get free OB27 update rewards in Free Fire

The awakened version of Hayato will also receive certain changes. His Art of Blades will be a passive ability. It will reduce frontal damage by 1/1.5/2/2.5/3/3.5% with every 10% of max HP loss.

A124’s Thrill of Battle will quickly convert 20/26/33/41/50/60 EP into HP at various character levels. The conversion speed will be reduced to 4 seconds, while the cooldown will be changed to 10 seconds.