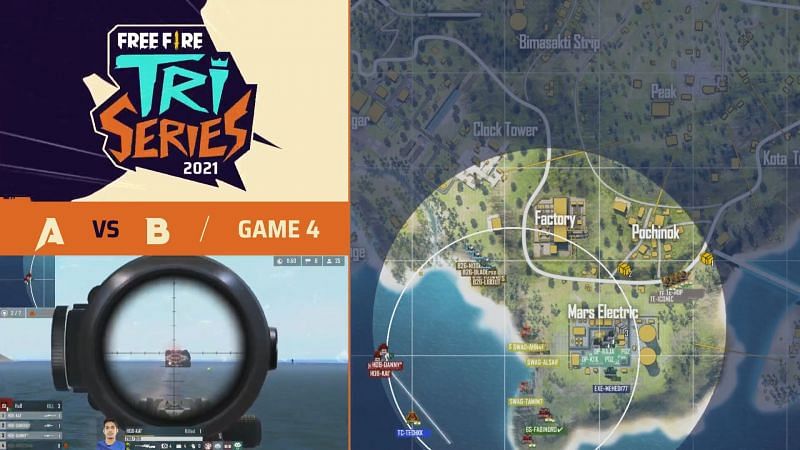 The Free Fire Tri-Series kicked off today with 18 teams from India, Bangladesh, and Pakistan competing for the ultimate title.

These 18 teams have been divided into three groups, with the top 12 teams from the overall standings qualifying for the finals. They will compete for the prize pool of $50,000.

Day 1 of the group stage saw teams from Group A and B competing in six matches. At the end of the day, Team Elite, who showed dominating gameplay, emerged as the table-toppers securing 108 points and 53 kills.

Following them in second place was TM Swag with 64 points and 22 kills. Extreme Ex claimed third place with 56 points and 18 kills.

The day started with the first and the second matches played on Bermuda and Purgatory. TM Swag won both games with 10 and four kills, respectively.

The third match of the day was played on Kalahari. Extreme Ex won with five kills to their tally. Team Elite finished behind them in second place in this match with nine kills to their name. Hotshot emerged in third place with two kills.

The fourth and fifth matches of the day were played on Bermuda and Purgatory. Team Elite secured the Booyah in both matches with 15 and 12 frags.

The sixth and final match of the day was played on Kalahari and was won by Galaxy Racer with five kills.

Following them in second place was Team Elite with eight kills. Riot finished third in-game with a total of three kills.

Pahadi from Team Elite emerged as the leader with 23 kills and 10385 damaged in the overall kill-leaderboards.

Following him in second place was his teammate, Iconic, with 13 kills and 8052 damage. Another from Team Elite, Killer, finished in third spot on the list with 11 kills and 4709 damage.

It remains to be seen which of the twelve teams qualify for the event’s finals. The coming days will be exciting for the viewers who have been waiting for this event for a long time.