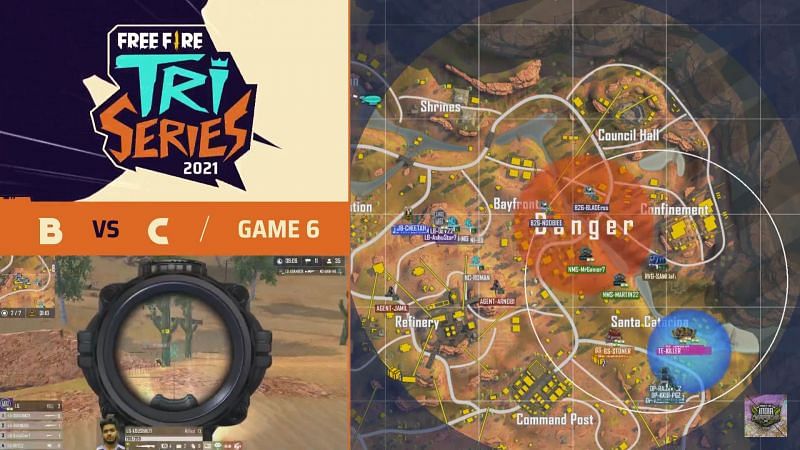 The fifth day of the Free Fire Tri-Series featuring teams from India, Pakistan, and Bangladesh came to an end today. After an exciting day of play that saw teams from Groups B and C vying for the top 12 spots in the finals, Team Elite maintained its dominance and emerged as the table toppers with 372 points and 175 kills.

Following it in second place was Sixth Sense with 231 points and 104 kills. The third place was secured by Extreme Ex with 224 points and 75 kills.

The day started out with the first match being played in Bermuda. Extreme Ex claimed the Booyah in this match without any frags. Following it in second place was Sixth Sense with 12 kills. Demons Pride finished third with three frags.

The second and third matches of the day were played on Purgatory and Kalahari. Both matches were secured by Team Elite with five and 12 kills.

The fourth match, played on Bermuda, was won by Nemesis with nine frags. The fifth match of the day was played on Purgatory. It was claimed by Team Elite, who fired on all cylinders with eight kills.

The sixth and final match of the day, played on Map Kalahari, saw Team Elite claim its third Booyah for the day with 14 kills. Finishing behind it in second place was Demons Pride with two kills, followed by Extreme Ex at third place with three kills.

Players from Team Elite continued their domination over the kill leaderboards, with Pahadi, Killer, and Iconic securing the first three places with 63, 42, and 41 kills.

Mr. Jay from Sixth Sense was in fourth place on the kill leaderboard with 35 kills, while Kai from House of Blood stayed in fifth spot with 33 kills.

With just one day remaining in the group stages, teams at the bottom of the points table will be looking to make their mark and qualify for the finals by finishing in the Top 12.