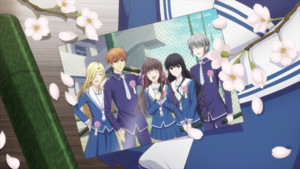 “The stronger the love, the lonelier the goodbye.” This is what Tohru says when she and Kyo are packing up to leave Shigure’s house, but it’s a great metaphor for Fruits Basket the Final as a whole. “See You Again Soon” is a title that pours salt into my wounds as the episode firmly closes the door on the Fruits Basket story. This is a complete and total epilogue, addressing where each of the characters are going to go from here, and extracting every potential answer. Still, this 63-episode anime was never going to be able to address all the details of the 136-chapter original manga, and some of the side characters’ happy endings may seem a bit sudden or unexpected to anime-onlies. All is forgiven by the end though, when main couple Tohru and Kyo’s lifelong happiness is secured without a doubt.

The curse may have broken, but Kyo’s suffering is far from over! Uotani and Hanajima preside over his first date with Tohru as her self-appointed chaperones (you might remember that they threatened to do this many, many episodes ago), and they have plenty to criticize him about. Honestly it’s hard to imagine a more on-brand first date for this pair than the zoo, since animals have had such an outsized impact on their lives up to this point. It’s a remarkably well-balanced vignette because it first focuses on the cuter aspects of the Zodiac curse (“Look! It’s a mini-Isuzu-san!” Tohru says, pointing at a pony) before zeroing in on Kyo’s muddled emotions at being completely ignored by a cat for the first time in his life. Just as the setting is a deliberate choice to mark progress in the story, the decision to have Hana and Uo accompany the couple on their date is no throwaway joke. Instead, it offers Tohru’s dearest friends the opportunity to approve of Kyo and entrust him with her happiness in place of Tohru’s absent parents. In my last review, I lamented that Kyo wasn’t able to understand when Kyoko asked him for this same favor. That he’s able to confidently accept this mission now feels like closure.

Kyo has become a better and more mature person through loving Tohru, and the same is true with Yuki—though his love for her takes a different form. Yuki first made the realization that Tohru was like a mother to him in episode 46, but it’s a far more impactful speech now that he has the chance to tell Tohru himself. Normally, telling somebody your own age that you see them as a mom would be incredibly weird, but in Fruits Basket the Final it’s perhaps the most poignant speech of the season. Why it works: Yuki isn’t making this about himself, but thinking the whole time about how his confession would make Tohru feel. Anime, including Fruits Basket, isn’t always kind to mothers, who suffer and die for the sake of their kids all the time. It can be a thankless role. When Yuki mom-zones Tohru, he isn’t expecting her sacrifice at the expense of his own self-actualization. Instead, he is thanking Tohru for choosing to show him care when it wasn’t required of her. “You raised me into a person,” he tells her. We can immediately see how Yuki has changed for the better when he and Kyo don’t lose their tempers with one another, even when Yuki asks to speak to Tohru alone. It’s also refreshing to see his interactions with Machi, and contrast how he treats the girl he loves as family and the girl he loves romantically. There’s a lot more playfulness to Yuki’s relationship with Machi as the two get increasingly comfortable with one another.

What’s special about this episode is that it isn’t a one-way street regarding Tohru’s giving nature. It’s about what she’s gotten back in return, too. “Listen up: everyone loves you more than you think they do.” Kyo says this to comfort Tohru while she’s fretting that her upcoming send-off will be the last she ever sees of her friends. Through Kyo’s words, and Yuki’s, too, she is able to see that her importance to her friends is beyond transactional—that even when they can’t hear her morning greeting or eat her cooking, they still love her. The majority of the episode centers around those feelings, as all of the characters prepare for a send-off we never actually see. As they recollect their fondest Tohru memories, we get glimpses of their own happy endings. It’s gratifying when Rin says she can’t forgive Akito yet; I was so glad somebody said it! Meanwhile, it’s mature of Akito, who is sporting a newly lengthened haircut, to stay out of this send-off. I like how the story doesn’t try to artificially repair centuries of Sohma trauma, but instead acknowledges that forgiveness, or at least acceptance, is going to take time.

If you’re an anime-only Fruits Basket fan, it might give you some comfort to know that there’s more background to some of these romances in the manga. Hatori’s romance with Tohru’s homeroom teacher Mayu may appear to have come out of thin air, but the manga includes a full chapter about them. Likewise, there’s a lot more to unpack regarding Ritsu and Shigure’s editor, Mitsuru, who become friends and eventually begin dating after bonding over their similar personalities. The manga also reveals a lot more about Hanajima’s relationship with Kazuma. Though this final episode shows their first anime interaction (correction: the SECOND, thanks to FalconClaw129 for reminding me!), the manga explains Hanajima’s implied crush on Kazuma and her eventual job as a cook at his dojo. When she asks Kyo to call her ‘mama,’ this is also a reference to the long-running gag that Hana will marry Kazuma and become Kyo’s stepmother. This crush doesn’t go anywhere, and in the Fruits Basket Another sequel, she is married to somebody else. It feels extremely gatekeep-y to be like, “Don’t get it? Read the manga!” but I felt like it was important to explain where some of these seemingly shoehorned relationships are coming from. It’s possible that some of these side stories will get an anime adaptation eventually. We just learned that there’s going to be a new Fruits Basket anime about Tohru’s parents in 2022.

Still, it’s hard to be too upset about this detail because the episode concludes by reassuring us that Tohru and Kyo couldn’t have lived more happily ever after. We learn this when we meet their young granddaughter, cat and rat stuffed toys in hand, while Tohru and Kyo are out walking, their ringed, aged hands entwined. Fruits Basket has put this pair through so much. It has forced them to face their deepest emotional wounds before finally finding solace in one another. It’s hard to imagine another couple more deserving of such a thoroughly happy ending.