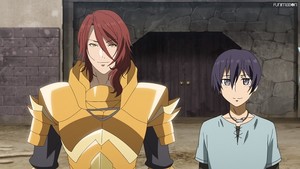 The question of Hiro’s motivation in Full Dive, what he’s getting, or at least trying to get out of Kiwame Quest, has been a slow-burn one. There’s the specter of generally bettering his life in the wake of pissing away his running career, sure, but the actual mechanics of doing so beyond the vague sense of accomplishment from progressing through this hellacious game haven’t been elaborated on. As with so many other elements of the show, this week’s episode features a few gestures at more specific directions for Hiro’s self-improvement, but also as usual, buries it under the slog of enthusiastically depicting the dire depths of the game with only occasionally-amusing results.

I’d say part of my problem with Hiro’s interaction with his situation is how wishy-washy he continues to be about it. We’re eight episodes into this series, with at least a couple moments where he’s declared his resolute intent to actually play through the game. Yet, as before so many other times, the latest information he gets about the more deeply destructive nature of Kiwame Quest leads him to consider the entirely reasonable option of simply opting out of playing more. That’s not to say I don’t understand that constantly questioning of this kind of commitment is a totally human reaction to any adversity, least of all the extreme kind Hiro has experienced in playing this stupid thing. But when the supposed cornerstone of your main character’s arc is him finding the resolve to push forward with something, and you show him second-guessing it at every opportunity as he recognizes his efforts are only going to end with him screaming, it becomes tiresomely circular.

If we’re intended to read Hiro as getting anywhere as a person, it would have been easy to skip his regular reiteration of “This game sucks and I should probably stop playing” to get straight to his otherwise-immediate change of heart as he lays out his resolve for his sister in a call-back to her earlier annoyance at his lack of commitment. That follows up on a key character point that had been established, and feels like noted growth that they didn’t need to hammer the gimmick of the show into us for the umpteenth time to illustrate. This little bit of exposition points out how Hiro’s drive in the game actually rounds back to him improving his life overall, with the experience more about teaching him to stop running away from things, rather than the game delivering any tangible reward to him on its own.

That idea gets elaborated on a bit further by the very end of this episode as well, as the two overpowered mercenaries Hiro finds himself matched against in training are directly evocative of the bullies who take advantage of him in real life. These kinds of 1-to-1 comparisons are a common, easy device for these sorts of life-improvement-via-alternate-world stories, but that’s because they work on a basic level. This provides a clear hurdle for Hiro to get over that can directly improve the shitty life he’s otherwise resigned to in the real world: If he can stand up to two fantastically-strong bullies with swords, then two regular bullies without swords ought to be a piece of cake. It’s probably the first case of a goal in Kiwame Quest presented for Hiro to clearly achieve beyond “Just try not to get completely owned by this game’s punishing mechanics”.

Unfortunately, those more-functional character bits are just the beginning and end of this episode, with the rest filled up by Full Dive‘s evergreen commitment to depicting the massive misery of our main man. It’s easy for us as an audience to foresee how needing to go through a training camp in ‘realistic’ style would be the opposite of fun, and the show adds an extra layer of distressed distinction on it with the point that Hiro is hardly in the shape of a soldier to start. There is the interesting element that one of the only reasons he wound up thrust into this position in the first place is because of his still-unexplained burst of superpowers last episode. However, as an illustrative commentary on how out of their depth online-RPG nerds would be in this kind of full-dive scenario, it almost works. Trying to graft in motion controls have already thwarted the enjoyability of many a sword-swinging game, so just imagine how even more unenjoyable (and thoroughly pointless) it would be if you had to fully be good at something in real life in order to succeed at it in the virtual fantasy realm. While Hiro was busy running track, he should have instead studied the blade.

Don’t get too excited about much compelling commentary from that setup though. At this point I’m not sure if Full Dive is trying to convince me of how much Kiwame Quest sucks, how much Hiro sucks, or some combination of both. Yes the game’s unnecessarily realistic, but our hero is acutely aware of that now, so him bumbling into embarrassing himself in a training battle where he inevitably gets his ass kicked doesn’t really ring as anything other than his own stupid fault at this stage. Sure, his seeming new friends among the guard trainees ditching him after his humiliation comes off a bit harsh, but what did Hiro or us expect by now? It’s further undercut by him now making the odd assertion that he believes he’s been the ‘game’s protagonist’ all this time. Not only should he be well aware now how uncaring the realistic-style world he’s trying to adventure through is to any nominal role he occupies, it’s also just a factually-incorrect assessment of an MMO’s approach to player-characters. If this was supposed to represent a cornerstone of Hiro’s philosophy that has handicapped his own efforts to grow so far, it could have been introduced as a point of him much earlier on in the story. But here it just adds one more misassessment to the procession of those he’s made so far, each rendering him less sympathetic with every poorly-considered choice he makes in engaging with the game. We’ll just have to wait and see if Hiro actually learns anything from this traumatic tutorial.