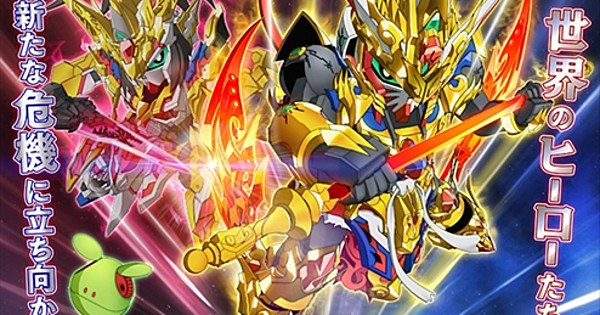 The balance of the worlds is maintained by heroes. Suddenly a red-hot meteor falls upon one of these worlds, called Neo World. An amnesiac youth named Wukong Impulse Gundam appears at the point where it landed. The chaos that starts with this incident spreads through the other worlds, one after another.

At the same time, Zhuge Liang Freedom Gundam learns via astrology of an impending disaster. He and his sworn friend Liu Bei Unicorn Gundam take action to save the worlds from this crisis, and begin a journey along with Wukong.

Takahiro Ikezoe, Touko Machida, and Ryou Sasaki are all returning from SD Gundam World Sangoku Sōketsuden as director, main writer, and CGI director, respectively. Toshinao Miyauchi is credited for SD design. Yūji Kaneko and Sо̄ta Kameyama are the art directors, and Sadayoshi Fujino is the sound director. Takashi Miyamoto, Susumi Imaishi, Shingo Abe, Yuka Mitaguchi, and Shinya Terashima are credited for design works. Kentarо̄ Washio is in charge of sound effects. Kumiko Sakamoto is the editor. Tomotaka Osumi is composing the music. Bandai Spirits Hobby Division is in charge of planning, and ADK Marketing Solutions is producing the anime.

The anime continues on from the SD Gundam World Sangoku Sōketsuden anime, and will add new characters to the story, such as Gokū Impulse Gundam, Nobunaga Gundam Epyon, and Sergeant Verde Buster Gundam.

SD Gundam World Sangoku Sōketsuden premiered in July 2019, and was only available previously in 14 countries and territories, including Hong Kong, Taiwan, South Korea, the United States, and Italy. The anime began streaming in Japan on YouTube‘s Gundam Channel on February 25. It is also running on BS11 channel and Tokyo MX.

The SD Gundam series is a spinoff of the main Gundam franchise that anthropomorphizes the franchise‘s iconic mobile suit mecha. The spinoff franchise has spawned its own anime, manga, games, and model kits.