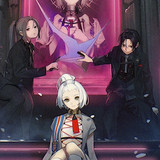 The Caligula Effect 2 is coming to PS4 and Switch in Japan on June 24, followed by North America and Europe this fall. While we wait for launch, FuRyu and developer Historia have a second live stream presentation planned, with more footage and information to be revealed on April 9 at 8:00pm Japan Time.

The stream will be available to watch via YouTube and Twitter. In addition to an overview of previously announced information, more battle and event gameplay will be showcased along with additional details about limited edition bonus items.