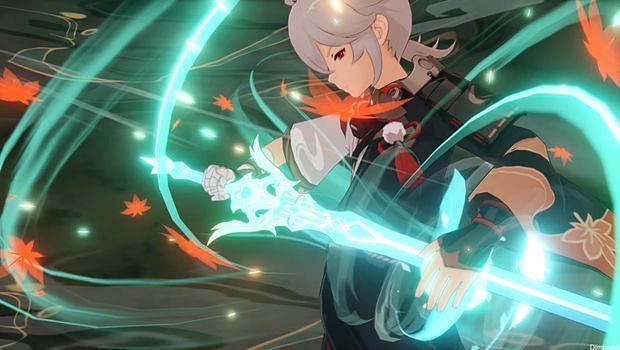 Genshin Impact 1.6 leaks have revealed more information about Kaedehara Kazuha, the new 5-star Anemo Samurai from Inazuma. These new leaks showcase some of his English voice lines, his expected banner release date, and his signature 5-star weapon. With 1.6 coming in around a month, players will be able to meet Kazuha and begin their journey through Inazuma soon. Players can get a better look at all of this information in advance here.

Players can get their first taste of Kazuha’s english voicelines thanks to this new Genshin Impact 1.6 leak from Dimbreath. They seem to showcase his voicelines during his Elemental Burst: Manyou no Ittou. During this burst, Kazuha slashes his sword creating a vortex of Anemo energy that will absorb the first element it swirls and rapidly deal damage to surrounding enemies. This Burst is definitely one of the coolest in Genshin Impact, and with a strong 367% modifier at level 6, it may be one of the strongest support Bursts in the game.

A ronin from Inazuma, who currently lives with the Crux Fleet of Liyue. He is calm yet acts freely, and his past is buried in his heart.

If Kazuha’s release follows the schedule established by previous Genshin Impact banners, he should be released three weeks after the Klee rerun that has been part of the Genshin Impact 1.6 leaks. This would mean Kazuha’s banner begins on June 29th, and it will run for 3. The other characters on Kazuha’s banner are unknown, and it is even possible that he may have a new 4-star character, but players will just have to wait and see if that is the case.

Also read: Ayaka banner may arrive in Genshin Impact before her birthday, according to new leak

The Freedom-Sworn is part of the Genshin Impact 1.6 leaks, and is likely to be Kazuha’s 5-star weapon of choice. The bonus on this Genshin Impact 1.6 weapon gives a flat 10% buff to all damage dealt by the user, and users will gain a Sigil of Rebellion whenever they cause an Elemental Reaction.

After collecting two sigils, players gain 16% damage with all Normal Attacks, including Plunging Attacks, and they gain 20% Attack stat for 12 seconds. This is perfect for Kazuha as he uses his Elemental Mastery to boost the damage dealt by his Normal and Plunging attacks through his skills.

This benefits Kazuha greatly, as he requires Elemental Mastery to deal the most damage, and he has a strong unique plunging attack that could deal a massive AOE with a buff from this weapon.