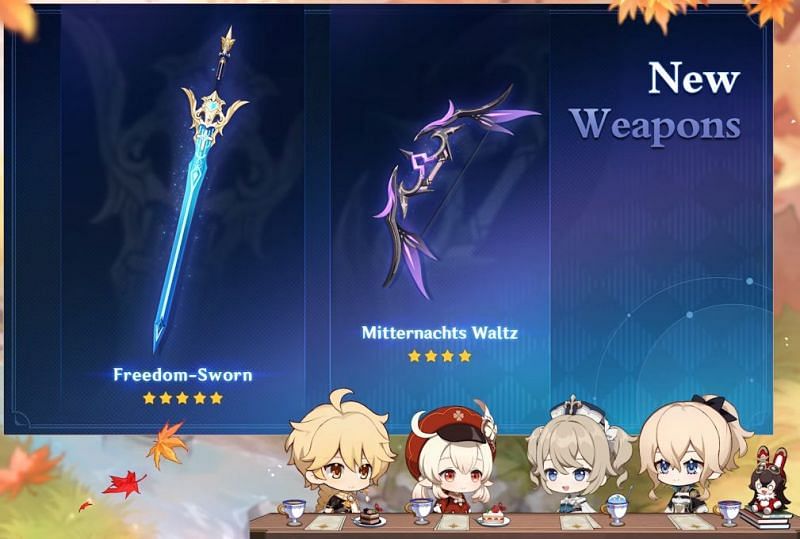 Genshin Impact’s 1.6 livestream has revealed three new signature weapons coming to the game and they seem like powerful additions to the collection of weaponry that players have access to.

These unique weapons all fit their respective characters perfectly and will provide unique stats that are likely to help players max out their potential. Two of these weapons are four stars while Kazuha’s signature sword, Freedom-Sworn, is a 5-star weapon.

Also read: How to get 300 free Primogems from Genshin Impact redeem codes today: All regions

These new weapons coming to Genshin Impact all have powerful effects, and the 5-star weapon, Freedom-Sworn, is definitely the strongest. This sword is perfect for Kazuha as it ascends with Elemental Mastery and gains its stacks through Elemental Reactions.

Due to Kazuha being an Anemo character, he will dish out plenty of Elemental Reactions, and with his Elemental Mastery scaling he will gain a lot of damage with the additional stats provided by the sword. This weapon also boosts Normal and Plunge Attack damage, which is great for Kazuha, who is currently one of the only sword wielders who utilizes Plunge Attacks regularly.

The Dodoco Tales is a new 4-star Catalyst that will be acquired through events on the new Midsummer Island Event. Players will most likely be able to gain Refinements for this weapon as well, making this a powerhouse for F2P players. This weapon will increase Charged Attack DMG by 16% at refinement 1 and increase ATK by 8% on a successful Charged Attack hit.

That makes this weapon very strong on most Catalyst users like Klee, as they will Charged Attack often. This weapon does ascend with ATK%, which can lower its viability as Crit stats are so heavily desired in weapons, but it remains to be seen how powerful this will be.

The Mitternacht Waltz seems to be the perfect weapon for Fischl, at least appearance-wise. This weapon matches her aesthetic exactly, and it even has a name to match the engimatic Mondstadt character.

These powerful new weapons will definitely provide a lot of use to players when the Genshin Impact 1.6 update releases. Players will want to get their hands on as many of these weapons as possible, and completing events seems like the fastest way to do so.

Also read: 5 materials to farm for Klee before her banner arrives in Genshin Impact 1.6 update