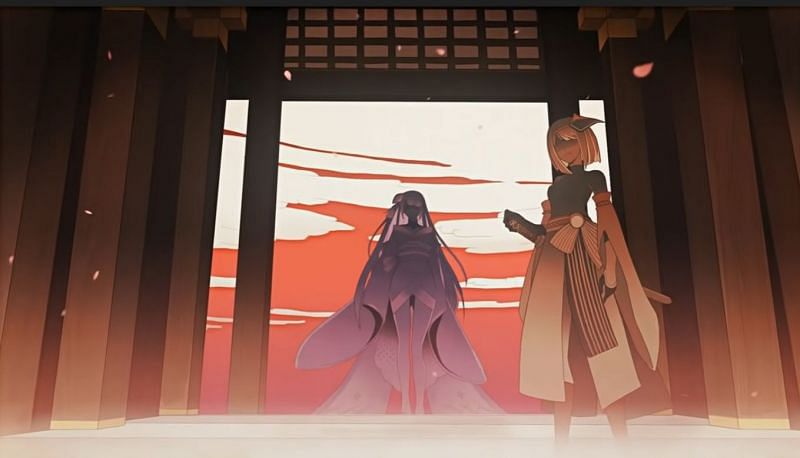 Genshin Impact leaks are usually right on the money when it comes to accurately predicting what is going to be added to the game. Something like Baal’s introduction cutscene will likely be 100% true (given that there is a video of it), so it’s also nice to have it leaked beforehand. All of this will likely be tied to the 1.7 update of Genshin Impact.

I am certain some of you have seen the screenshots of Uncle Arky talking about Ayaka. I would like to make it clear that whatever I have said is not related to Uncle Arky. Uncle Arky’s original statement is “Ayaka will not be weaker than Xiao”. (1) https://t.co/orRHQu28sk

Many of the Genshin Impact leaks describe the potential for some upcoming playable characters, but they unfortunately do not list any specifics. As a result, Genshin Impact players won’t know the exact % of how much higher Ayaka’s DPS will be compared to Xiao’s.

That said, there was a recent buff to Ayaka’s skillset, which could partially explain why her DPS is going to be so good. She will have one of the highest ATK stats out of any sword user in Genshin Impact, so her shifting more toward CRIT DMG% as well will make her an appealing choice to Genshin Impact players wondering if they should roll for her or not.

Xiao being a Anemo character is already top 3 DPS in the current game, easily. Ayaka, being a Cryo DPS, would benefit from reaction damage as well, it is not that hard to understand the logic here.

Xiao is considered a great DPS character by many Genshin Impact players, so for there to be some leakers claiming that Ayaka’s DPS will surpass Xiao’s is quite impressive. The reason Genshin Impact players are comparing Ayaka to Xiao is because they both use swords (as opposed to Ganyu, who uses a bow).

A lot of Ayaka’s damage is going to come from Elemental Reactions, which is incredibly easy to do in Genshin Impact’s current metagame. Xiao is also used as a benchmark since players know how great his DPS is, so it’s good to know that future DPS characters will surpass him in that regard.

The video shown above is Kazuha’s leaked storyline cutscene. It includes Baal, and it is voiced in English. The quality of the video, on top of the fact that the voice matches what’s known about Kazuha, makes it incredibly likely that this leaked video is legit.

The two minute video is about Kazuha talking with his friend about a powerful sword, which is only seen when divine punishment is to be dealt. The Raiden Shogun, Baal, has her silhouette seen in this video in the usual Genshin Impact video style.

The video also covers the lore of the Vision Hunt, which stripped away a lot of citizen’s ambitions. It’s an unfortunate end for Kazuha’s friend, but Kazuha managed to steal his vision before Baal could. It’s an interesting backstory for Kazuha, which also sheds some light on why he would help the player get into Inazuma.

Baal as a character

1.Raiden’s kit will make you feel that it does not even matter if she’s Electro or not.

2.Raiden may not be a one-hand sword wielder (50/50 possibility), but she is definitely the same person from next door.#GenshinImpact

Apparently, Baal is going to be a terrific support unit in Genshin Impact. As it stands right now, Electro is undisputedly the weakest Vision in Genshin Impact. That’s why the leaker above says it doesn’t matter if Baal (who is Raiden) is Electro or not, as the rest of the kit is just that good.

However, that would leave fans wondering exactly what her kit could be. According to a Chinese leak on Baidu (the “uncle leak”), Baal is capable of stopping enemy movements for a few seconds, even if the player swaps to another character. After some time has passed, she will do a slash.

Apparently, the Chinese leaker (who is different from the leaker in the tweet above) says she won’t be a full-on support unit and will be more like a half-DPS option. There is no video evidence from this leak, so players shouldn’t believe it right away until then.

There will be two new pieces of furnishing introduced in the near future for Genshin Impact fans to enjoy. The one seen in the tweet above is the Googol Table, which is obviously based on Google. Its “unknown origin” and “unforgettable color scheme” makes sense given the context of what the item is.

It isn’t presently known how players can obtain the Googol Table. It’s possible that it will be available in some cross-promotional event, as other video games have also had similar items in the past.

The Googol Chair is the second new furnishing that will be released in Genshin Impact. Like the Googol Table, this chair is an obvious spoof of Google given the name and color scheme. Likewise, it isn’t yet known how players will unlock this furnishing set.

Both the Googol Chair and the Googol Table have the same crafting requirements. Both furnishings require eight Cuihua Wood and four Fabric individually. Of course, the method of obtaining these blueprints is still up in the air.