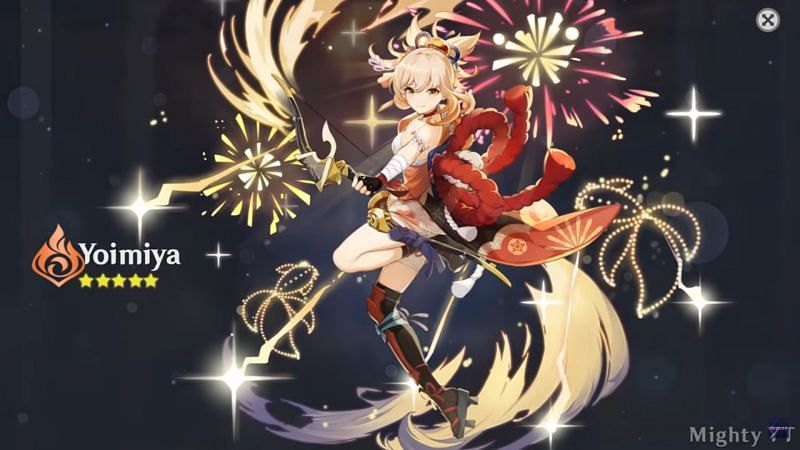 The 5-star character, Yoimiya, will likely debut soon in Genshin Impact, with a new leak showing tweaks to her kit.

Along with Ayaka, Yoimiya’s banner is predicted to arrive in the next update. Players can safely expect Yoimiya to be a Pyro bow-user in Genshin Impact. Because of leaks from the 2.0 beta, players now have a decent idea of Yoimiya’s probable gameplay.

On the latest beta version of the game, Yoimiya’s E skill animation was shortened.

This is still prone to changes and doesn’t reflect the final product. pic.twitter.com/7CftNfSWpI

Based on the video, Yoimiya’s Elemental Skill animation is shorter now. Genshin Impact has seemingly removed Yoimiya’s twirling motion, as she now simply swings her bow in a slashing motion. As the animation duration is now shorter, the ability’s effect might trigger sooner after pressing the skill button.

News of this tweak came shortly after beta testers revealed another change to Yoimiya’s Elemental Skill. The cooldown for this ability was originally reported as 20 seconds, but a patch to the beta has evidently lowered it to 18.

Yoimiya’s Ultimate ability, “Ryukin Saxifrage,” deals AoE Pyro damage and marks an enemy with Aurous Blaze for 10 seconds. Anyone except Yoimiya will trigger explosions upon hitting the marked enemy. Because Yoimiya herself can’t trigger these explosions, most players will likely switch to a sub-DPS character after using the burst.

Furthermore, the Aurous Blaze marking may be useful for handling more than one opponent in a battle. When the enemy marked with Aurous Blaze is defeated, another nearby enemy will be marked for the remainder of the 10-second duration.

According to leaks, Genshin Impact will release Yoimiya immediately after the Ayaka banner ends. If event banners maintain their three-week duration, this leak implies Yoimiya’s banner will start around August 11th.

Though the featured 4-stars are mostly unknown, Sayu is likely to make her first appearance on Yoimiya’s banner. The Genshin Impact community has anticipated the Anemo character Sayu for a while now, and it seems the Inazuman ninja is on her way.

Before Sayu arrives with Yoimiya’s banner, two other new characters, Kazuha and Ayaka, will appear consecutively. Summoning all the new characters is tempting, but unfeasible for most. Players who want to summon Yoimiya or Sayu should make sure to have some Primogems ready to use.