How would you rate episode 12 of
Higehiro ? 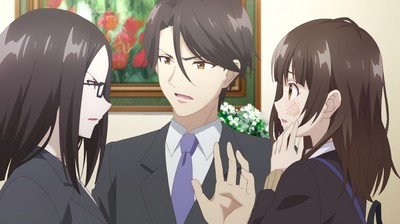 It might have been inevitable that “Mother” would end up disappointing me. I maintain that Higehiro has done a pretty good job of telling an emotionally resonant story about believably damaged and likeable human beings, especially in its first half, but if recent weeks have proven anything, it is that the show just doesn’t have either the visual chops or the storytelling skill to handle high melodrama. As shows like this so often discover, there is a very fine line that separates heightened and stylized theatrics from unintentional camp. And as any fan of cult camp classics can tell you, nothing makes for more unintentional hilarity than coming home to meet Mommie Dearest.

To her credit, Ryoka Yuzuki isn’t phoning it in here, and she very clearly communicates how broken Sayu’s mother is in her own right, both in the seething rage that she demonstrates for the majority of the episode, and in the inevitable screaming breakdowns that come later. The stiff and plain animation doesn’t do the character any favors, but that isn’t anything new around these parts, and it isn’t really the core issue of this episode anyways. The problem is simply that Sayu’s mom is such an irredeemably awful parent that it becomes impossible to actually take her seriously as a real human being. I wasn’t kidding earlier when I alluded to that infamous Joan Crawford biopic – for the entirety of this episode, the elder Ogiwara is basically one Scotch away from transforming into a manic wire-hanger averse banshee decked out in a Day-Glo skin-cream clown mask from hell.

After greeting her runaway daughter with a slap to the face, Mama Ogiwara spends the entire episode berating Sayu for making the family look bad, pouting like a brat when Sayu brings up her very understandable grievances, and generally scoffing at every word that every person says to her. She screams at her meek adult son to shut up, and then hisses at Sayu that she wishes she’d never even given birth to her daughter. For Yoshida’s part, Sayu’s mom simply can’t imagine why the hell some strange man would show up with her errant daughter and basically confess to committing a crime, which…okay, that is technically a fair point, but it’s also the same goddamn point that the show has been making for twelve weeks in a row now. We get it, Higehiro, literally every single character is aware of Sayu and Yoshida’s unconventional relationship.

Point being, Sayu’s mother doesn’t just suck – she somehow makes Gendo Fucking Ikari look like a more responsible parent, because he at least had Shinji accosted by sketchy men-in-black when the kid flew the coop. I’m not arguing that there aren’t sociopathic parents out there that act this shitty to their kids in real life, because if being a teacher has taught me anything, it’s that terrible parents can always find spectacular and novel ways to ruin their kids lives. My issue is that, even within the anime drama reality that Higehiro exists in, Sayu’s mother isn’t a person – she’s a caricature, an abstraction of an abstraction that has been filled with whatever the author figured would be literally the worst possible instincts and words that a mother could have to deal with Sayu’s specific struggles.

What’s worse is that Higehiro makes the mistake of writing checks that it simply cannot cash, since it ends up solving Sayu’s problem by literally doing nothing. I’m serious. All that happens is that Yoshida spends an absurd amount of time inner-monologuing a bunch of over-written mush about how you can’t pick your family, and how children shouldn’t be responsible for raising themselves when their parents fuck it all up. This could not be a more obvious observation to make, but in the face of Sayu’s objectively abusive and toxic household, Yoshida and Issa’s grand solution is to…bow real low to Sayu’s mother, and ask really nice for her to treat Sayu right.

Here’s the kicker, too: Everyone involved acknowledges that this probably won’t work! Sure, Sayu’s mother says that she’ll treat Sayu with a begrudging apathy for the remainder of her high-school years as long as she doesn’t cause “problems for the family”, but then the other characters just get in a circle and tell each other, “Yeah, but people don’t really change that easy, and Sayu will probably have to take the onus of responsibility and maturity when it comes to dealing with her mother.” You know, the same mother who included “having a best friend commit suicide right in front of her daughter” on the list of problems that Sayu caused for the family.

I get it. Yoshida is just some guy – he doesn’t have the legal authority to just adopt Sayu, or whatever, yadda yadda. But why the hell can’t she live with Issa? Her brother was fine with paying for a hotel before; can’t they at least arrange for some kind of healthy living arrangement now, since Sayu seems to have overcome her instincts for dissociative vagrancy and unhealthy sexual exchanges? And I know that Japan is very much behind the curve in many ways when it comes to how mental health is portrayed and treated in its society, but the show seems awfully proud of how self-aware and hip it is when it comes to some of these current social issues, so why has nobody mentioned the really obvious need for one or both of the Ogiwara women to see a therapist? Are Child Protective Services not a thing in this universe?

“Mother” is an episode that is too underwhelming and flat to count as something that is truly heinous or offensive. What it does reveal, though, is how unprepared Higehiro was to finish what it started when Sayu walked through Yoshida’s door all those episodes ago. If her family issues had come with even a passing whiff of nuance or subtlety, it could have been a lot more interesting, and it would have felt a lot more real. Instead, Sayu’s mother was basically the final boss for Sayu and Yoshida to defeat now that they’ve leveled up a bunch and put all of their stat points into Feelings and Introspection. All that’s left is to see what the future brings in the final episode, which is titled “Future”, naturally. Whatever comes of it, I just want to know whether Higehiro will stick the landing, or if there is going to be one final disappointment for us all to reckon with in the end…