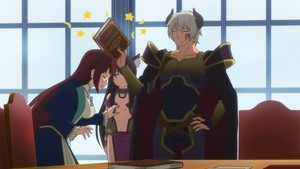 Hey, there’s Alicia! She was conspicuously the only major first-season character not to return in last week’s episode of How NOT to Summon a Demon Lord Omega, and the preview then made apparent she’d be getting special focus dedicated to her comeback this week. It makes sense from an explorative standpoint. She may be as loyal to Diablo now as any of the other ladies in his orbit, but Alicia’s philosophy on humanity is as…pointed as ever. Her lack of faith in people and corrupt institutions means she’s ready-made as a foil to Lumachina here, so we get to catch up with a character from the previous season while getting more development for the new focal girl from this one. Alicia apparently still having her connection to the King also lets Demon Lord round back to the recurring point of government institutions versus religious ones, even as Diablo has left Laminitus in the dust.

Those ideas are pretty well established with the character interactions introduced for this episode to propel itself on, but I actually don’t want to get out of my depth and suggest that Demon Lord is overly deep in its presentation. There’s a tendency to want to oversell something like this show simply because it has any complex characterizations or concepts at all, and those are nice, but they ultimately aren’t the main appeal of the show, and we all know it. Alicia’s explanations of her loyalties and philosophies and how they run counter to Lumachina’s faith are still punctuated by shots of her breasts heaving out of the new dress she’s wearing, as well as constant panicked internal monologue from Diablo about just how damn hot she is. The characterization bolsters this, sure, since Alicia’s ever-present shockingly-effective communication skills have always fed in to how much she caught Diablo off-guard even before he found out she was a genocidal demon-worshipper, but it’s still all ultimately there to feed into the ecchi entertainment value of the character.

Similarly, one has to wonder if Demon Lord Omega is throwing a few too many balls in the air as it sets up the forthcoming conflict for the rest of its season. The driving questions of faith as an institution with Lumachina continue to be interesting, but the effective motivations of the plot, as well as the mechanics in getting there, turn out to be far more pedestrian. Yes, this season has already worked by making a strong point about corrupt leadership of the church being motivated by the power-hunger of simple scumbags, but that just makes it feel like more padding to watch Lumachina blissfully walk into accusations of Vishos, the leader who ordered her executed in the first place, and think things could possibly still be as simple as him giving himself up easily. The faith motif is as strong as ever here, Diablo putting his faith in Lumachina’s attempts for the time despite her naivate, or Vishos demonstrating how exploiting a following’s faith can easily be used to keep corrupt people in power, but even with the ideas gelling like that so much of it still comes off as stumblings by the heroes to move them into place for the next steps in the plot then stall before they can really take action. By the same token, you’ve got this episode’s inclusion of a few additional beats for Horn, whom I like, but whose more overt attempts at characterization have always felt like a bit of a boondoggle to everything else the show was doing.

But look, you don’t come to me to confirm that Demon Lord isn’t exactly the most brilliantly-written show out there just like you don’t come to Demon Lord specifically for seriously-considered fantasy politics action. This show’s here for fanservicey funtimes more than anything, and as a vehicle for those alongside some decent plot beats, it still works. Alicia’s exposition to Diablo is as amusing for seeing the gulf in their personalities again after so long as it is for making clear that maybe Lumachina’s organizational difficulties kinda prove her point about how crap humanity is. And just floating the idea of Horn establishing her own master/servant relationship with Diablo allows some of the other girls, notably Rem, to consider how they’ve maybe gotten complacent with how benign the whole slave-collar thing has been, and that thinking about getting them removed will need to factor into planning their future at some point. It’s a forward-looking show where even the characters being taken prisoner by the corrupt church is accompanied by the upbeat credits music to let us know that everything will (probably) turn out okay.

To that end, the highlight of this episode for a lot of people is probably going to be Demon Lord providing its usual hot-and-heavy highlight reel, focusing on Rose this time! After a few teases, I will say this segment finally properly turned me on to Rose’s overall appeal, from the reveal of her sneaking into Diablo’s room at night to politely sit next to him in an attempt to charge her magic power, to her little “Beep Beep” recitations of her lowered energy level, I get it, she’s cute. Maybe Diablo’s properly getting it as well, obliging as he does to pour his magic power into her charging ports, if you know what I mean (I mean he literally charges her with some of his magic power through these mechanical ports she has on her back, get your minds out of the gutter, you perverts!). Seriously though, between the lavish attention focused on Rose taking her stockings off or Diablo, ahem, pulling out of her, you can still see where this show is prioritizing all its animation efforts. Like I said, it knows why you’re here.

So it’s a fun enough episode of Demon Lord Omega, keeping up my interest with characters old and new and their various appeals. I just hope it isn’t going to punch too far above its weight in terms of narrative complexity. This is a show that can certainly be sincere in its storytelling, and has hit some heights in the past, to be sure. But it would still do well to keep those elements that work streamlined alongside its more obvious reptile-brain appeal.