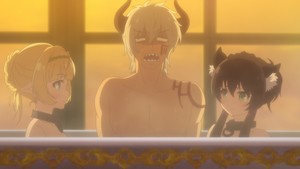 Dang, Diablo’s so overpowered, he was able to end his season several episodes early! Obviously we knew How NOT to Summon a Demon Lord Omega was right at the massive climax of this current storyline, what with our big not-so-bad guy positioned to attack and dethrone God. But there’s still a twinge of surprise as this episode kicks in and goes to the title without an opening as we realize this might actually be the last one. It ultimately speaks to the more modest ambitions of this second season overall, being a little smaller, a little cheaper, and now at the end, a little shorter than the original season.

I mean, it’s only smaller relatively, I suppose, featuring Diablo facing down a ‘God’ (or a Raid Boss with the functional power level of one, anyway). It’s a suitably-sized situation to pay off some of those ongoing broader thematic concepts like the ones about faith. So Lumachina gets to show what she can accomplish not simply with belief in a nebulous Creator, but from the belief the church’s followers have in her strong leadership specifically, and how that informs her faith in herself to make the right decision. That follows on from the previous episode’s lesson about making your own decisions, and if it’s a bit odd to hear the preaching of personal agency from a show where two-thirds of the main cast are literally enslaved to the main character, it still means there’s been a neatly consistent idea running through this whole season. It means Lumachina’s arc ends satisfactorily here, coming to the understanding that “Belief isn’t aimed towards titles or positions”, after all the faith her followers had generates a Spirit Bomb she’s able to use to blast the big boss’s shield off.

That’s the action component finishing off this final confrontation, and I suppose I could take issue with how Shera and Rem get sidelined again at the end of this season. But I’m actually more okay with it than I’d have thought, thanks to the tight focus on Diablo and Lumachina, since their developing understanding of each other has been the main undercurrent powering this run. Plus Horn got to shine last episode and this one also throws in a big moment for the other newcomer, Rose, hurtling herself in to take a shot while making pointedly clear she’s doing it out of her own volition and love of Diablo, as opposed to pure mechanical-maid motivation. It’s all set up around framing Diablo’s contribution to his interactions with others being how he (inadvertently or not) encourages them to do what they want. There’s something to be analyzed there vis a vis a ‘Player’ character being dropped into a world populated by a computer-controlled supporting cast, but Demon Lord really doesn’t approach that concept on its own, so I won’t wade too deep into it either.

I will say that I am mildly let down for how, after all the demonstrated effects of Diablo’s presence on these various fantasy-land ladies, his own growth and development as a person has seemed notably stalled throughout this season. I know I’ve remarked on it before, but even as he’s delivering important life-lessons on believing in yourself, his other contributions to the narrative are just him enacting the same character bits he’s had since the beginning of the franchise. Sure, him noting his propensity for absurd-BS bluff checks or overestimating his own MP pool are funny, but it would have been neat to see our favorite dipshit demon come out the other side of this adventure with some new insights on his own neuroses, maybe even powering up his actual self-confidence as opposed to playing out his continued need to fake it just to interact with other people. It even ends up undercutting elements of development he did have previously, as a segment here has Diablo remarking on his previous solo-only play-style hampering his use of party-protecting spells, even though that’s totally something that was discussed in the first season. It makes Diablo feel more like a central character based purely on a goofy gimmick, rather than someone anchored by a demonstrably relatable personality that wound up making that original series so surprisingly engaging.

That’s the ultimate point, of course, that How NOT to Summon a Demon Lord Omega never really reached the impressive emotional heights of its predecessor. It has instead felt purely like a small serving of bonus content for those already won over by that first series, a short DLC campaign that’s almost certainly also around for the potential of moving more statues and body-pillow covers. It’s still fun enough, including as this episode does a flustery instance of group bathtime between Diablo and his two main girls, or the end-of-episode revelation that Shera inadvertently married herself to Diablo with that magic ring she picked out of his treasure hoard a few weeks back (don’t worry, she’s totally down for a quest to help Rem become her official Sister Wife). And there’s even a little progression on some of the continuing world elements of the story; It’s heartening to think that Lumachina’s idealistic turnaround could finally start reforming the corrupt church organization that’s been at the heart of so many of this series’ conflicts. Plus it’s made clear that threads like Laminitus and Gewalt haven’t been left dangling and have parts to play in future stories. But while this follow-up installment was serviceably entertaining, the way it wraps here makes me think that perhaps I should be happy just with what we’ve got, and leave future visitations of this story to be had through the original novels. Demon Lord as a franchise already thrives by toeing lines, so I wouldn’t want to make it push its luck with adaptations any further.