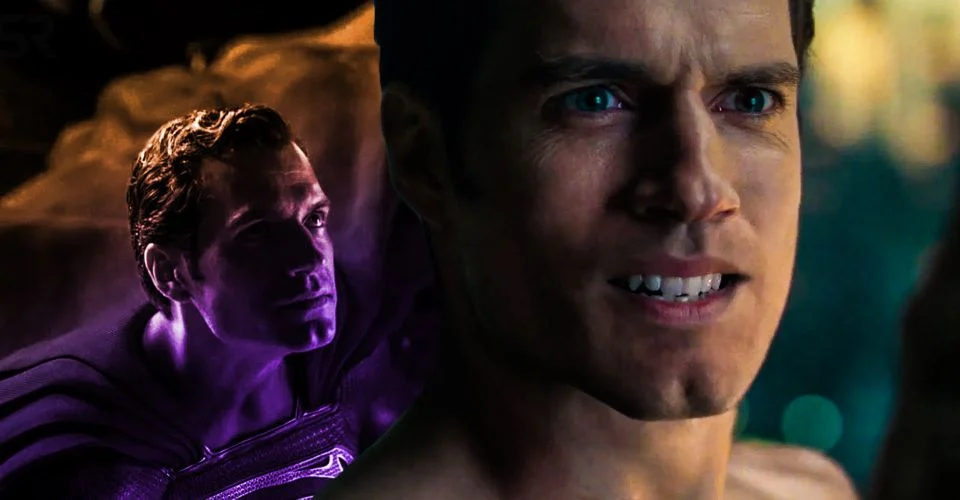 Here are all of the changes Zack Snyder’s Justice League makes to Henry Cavill’s Superman. The most recent actor to portray Clark Kent on the big screen, Henry Cavill’s run as Superman has been somewhat divisive, despite wider praise for the performance itself. Cavill arrives as a darker, brooding Kryptonian in 2013’s Man of Steel and isn’t a whole lot happier doing battle with Bruce Wayne in Batman v Superman: Dawn of Justice. The DCEU’s Kal-El is more violent than his cinematic predecessors, and Zack Snyder amplifies the Jesus parallels of the comic books to cosmic levels, creating a “misunderstood God” who’s unsure of himself and emotionally conflicted about his role on Earth.Continue Scrolling To Keep ReadingClick the button below to start this article in quick view.

Zack Snyder‘s interpretation of Superman was loved by some and criticized by others, but the 2017 Justice League movie united both sides in their disappointment. Snyder’s Superman was awkwardly blended with a lighter, jokier hero to confusing effect. Given the behind-the-scenes turmoil that has since become common knowledge, it’s hardly surprising that Clark Kent’s Justice League arc fell flat, but Zack Snyder’s Justice League presents a chance to lay those demons to rest. Sweeping changes are made to each member of the League, and the Man of Steel is no exception.

The 4-hour cut follows the same broad Superman narrative as the 2017 movie – Clark is revived by his pals and regains his senses in time to help them defeat Steppenwolf. But from his visual appearance to his DCEU future, Zack Snyder’s Justice League makes Cavill’s Clark Kent a richer, more interesting entity who sits comfortably within the wider context of the DCEU. This is how Zack Snyder’s Justice League changes – and improves – Superman.

His Lip Is Fixed

Let’s handle the facial hair elephant in the room. 2017’s Justice League begins with mobile phone footage of Krypton’s favorite son, and even with the shaky-cam, there’s something off about Henry Cavill’s face. In a baffling series of events that has since gone down in infamy, Henry Cavill was working on Mission: Impossible – Fallout at the time of Joss Whedon’s Justice League reshoots, and wasn’t allowed to shave the mustache he’d grown especially for the part. This meant some poor CGI animator had to digitally remove Henry Cavill’s facial hair, and the results are just as unconvincing as you’d expect. Since Zack Snyder’s Justice League is comprised predominantly of original footage (with a select few reshoots), Henry Cavill was able to film fuzz-free, fixing one of the theatrical cut’s biggest visual issues. Compared to other changes, the shave is hardly Superman’s most significant, but it does at least remove a major distraction from the character’s face.

One of the key differences between Justice League 2017 and the Snyder Cut is how the superheroes react to Bruce Wayne’s suggestion of resurrecting Superman. In the theatrical story, Bruce is on a stubborn crusade to bring Clark back from the dead at all costs, but the likes of Wonder Woman and Aquaman are concerned about using the mysterious Mother Box technology on a Kryptonian body. Bruce is still the driving force in Zack Snyder’s Justice League, but his colleagues take much less convincing – Wonder Woman especially. Only when Cyborg briefly glimpses a dystopian future does jump-starting Superman suddenly seem like a really terrible idea.

This change shifts the blame for Superman’s post-resurrection tantrum away from Batman. After the other League members constantly try to warn him, Kal-El’s rampage feels like Bruce Wayne’s fault. With less opposition to the plan, Superman’s actions are more shocking in Zack Snyder’s Justice League (or they would’ve been if we hadn’t watched this movie 4 years ago), and the audience is forced to consider that death might’ve fundamentally changed Superman, rather than just ruing Batman’s foolishness.

Snyder’s version of events also restores Superman as a God-like figure in the DCEU. The Justice League are united in their support of bringing Clark back because he’s that important to the planet’s future. This attitude fits far better alongside Cavill’s narrative in Man of Steel and Batman v Superman – the God walking among men, rather than simply the strongest weapon in Bruce’s superhero arsenal.

Doubling down on the threat of a rogue Superman, Zack Snyder’s Justice League restores the Knightmare footage that Whedon and Warner deemed surplus to requirements. These visions of a grim potential future show Superman cradling Lois Lane’s corpse and falling under Darkseid’s sway in the aftermath, lending his talents to the evil ruler of Apokolips. An epilogue added during reshoots catches up with Batman’s new-look Justice League (now with added white makeup) as they’re confronted with a fully-evil Clark ready to tear each of them limb from limb. The bonus Knightmare material plugs a DCEU gap left by Flash’s “Lois is the key” warning, and seeing more of Superman’s heel turn ensures a more complete narrative for Cavill’s Kryptonian.

It’s impossible not to watch the Knightmare future and think back to Batman v Superman. Back in 2016, the Caped Crusader was hell-bent on ending Superman, just in case the alien ever broke bad and lost control. In Snyder’s absence, Justice League 2017 made a concerted effort to abandon that idea, but in 2021, fans are treated to an unadulterated taste of Batman’s worst fears. As has been the case since Man of Steel, casting Superman in a villainous light won’t appeal to all, but in terms of turning the previously disjointed pieces of the DCEU into a cohesive picture, the Snyder Cut is clearly superior.

The inclusion of the Knightmare also adds a bittersweet flavor to the Superman palette. The audience see Clark’s future and, frankly, it’s not pretty. The three-way hug between Clark, Lois and Martha may be heartwarming, and Superman’s arrival in the final battle might have fists punching the air, but the ever-present threat of Knightmare looms large in the background, tempering their joy with the prospect of greater sadness to come.

Zack Snyder’s Justice League stops short of saying it out loud, but Lois Lane is quite clearly pregnant. Snyder has since confirmed that his long-term DCEU plan was for the couple’s son to be born without superpowers, and later become a successor to Batman. The Snyder Cut’s Super-Baby tease adds another layer of emotional complexity to Clark’s arc. If the threat of the Knightmare future is a dark cloud hanging over Superman’s second life, the prospect of fatherhood is the light at the end of the tunnel. The incoming arrival of Clark Jr. adds personal stakes as Superman faces Steppenwolf, and doubles the jeopardy attached to Lois’ potential Knightmare death. Suddenly, Superman has more to lose – but also more to gain by joining hands with the Justice League and protecting his adopted home (even if he doesn’t know it).

His Reunion With Lois Is Less Awkward

If you were in a movie theater when Lois Lane told her freshly-resurrected boyfriend “you smell good” in 2017 then you’ve witnessed an entire room cringe simultaneously. The reunion at the Kent family’s farm was saddled with Whedon humor, as Clark also claimed to feel “itchy” and refused to enter the house for fear of being trapped inside another “wooden box.” The awkward gags make light of what should be an emotional and heartfelt scene.

The reunion feels far more natural in Zack Snyder’s Justice League, easing up on the funnies, and giving a big, emotional pay-off via the group hug. Clark also acknowledges the engagement ring worn by Lois Lane, which is far more likely to bring a tear to the eye than asking for first dibs on the exclusive “Superman’s back” scoop. More importantly, the Snyder Cut shows Clark snapping out of his resurrection stupor, as he remembers enjoying childhood with the Kents. Without this moment, it’s hard to tell exactly when “Clark” comes back into Kal-El’s body.

Superman Is More Reflective – And Chooses The Black Suit

Ever since Jonathan Kent’s “let the schoolchildren die” speech in Man of Steel, DCEU Clark has been more reflective about his role on planet Earth than past iterations. Zack Snyder’s twist on the classic “with great power comes great responsibility” trope is Clark figuring out exactly what that responsibility entails. After Supes is resurrected in Zack Snyder’s Justice League, he lands upon his broken monument and sees tributes that were erased in the 2017 theatrical cut. It’s a natural continuation of Batman v Superman‘s courtroom hearing – is the Kryptonian mankind’s savior, or its burden?

Clark can’t seem to decide, and this leads to a very meaningful change of wardrobe in Zack Snyder’s Justice League. In the DC comics, Krypton’s sleek little black number is a regeneration suit that Clark wears to recover after cheating death, but this isn’t the case for the DCEU. In Man of Steel, Jor-El posthumously explains to his son that the red and blue costume represents a beacon for humanity – a determination to help and guide Earth toward a brighter future. According to Snyder, the black outfit is simply the traditional family suit of Kal-El’s ancestors, and choosing it in Zack Snyder’s Justice League marks a pivotal change in Clark’s attitude. No longer is Superman a public savior who puts himself forward in the courtroom to prove his virtue; he’s saving the world because doing the right thing is his nature. If the world responds by beheading his statue, so be it, and Clark retaining the black suit in his final scene proves these personal motivations are here to stay.

Superman Knows What He Must Do (Without Lois)

In Justice League‘s 2017 theatrical cut, Lois Lane tells her revived boyfriend that she must “send him away” because the Earth is in peril. Superman acknowledges he owes Bruce a favor, and agrees to go. Continuing Whedon and Warner’s missive to “lighten” Justice League, this feels all too jovial considering the gravity of Earth’s predicament. Why does Lois need to give the instruction? Why is Clark still trying to be funny?

Stop us if you’ve heard this one before, but Zack Snyder’s Justice League fixes this issue. Clark realizes by himself that the Justice League must’ve brought him back for a reason, and after picking out a new suit especially for the occasion, Superman visits Alfred for a quick debriefing. It’s a minor change, but one that speaks to Snyder’s preference for a more intense Man of Steel.

Superman Is More Intense In The Final Battle

Joss Whedon’s Justice League is as convinced about the idea of a serious Superman as Warner Bros. currently is about #RestoringTheSnyderVerse, and nowhere is that more apparent than in the final battle. In the 2017 clash between Steppenwolf and the Justice League, Superman proclaims his love for truth and justice, cracks wise with Batman, and races The Flash in what essentially amounts to a superhero measuring contest. The ending is less severe too, with Steppenwolf’s ultimate defeat coming at the hands of his fickle Parademons when they smell fear. The battle falls closer to a classic comic book movie romp – a PG-13 punch-up where Superman is more likely to kill you with a smile than his fists.

The difference couldn’t be more pronounced in Zack Snyder’s Justice League. From the opening “not impressed” line where Superman nonchalantly takes an axe blow head on, Clark is a beast who holds nothing back against his opponent. There’s barely a smile in sight as Kal-El pummels Steppenwolf with all the subtlety of Times Square on New Years Eve, before callously cutting off the villain’s horn with his eye beams and punching Steppenwolf from the tip of Aquaman’s trident.

Introducing himself with “how can I help?” Joss Whedon’s Superman was every inch the big blue boy scout of the comics, and while some will always prefer this innocence, there’s no denying that Zack Snyder’s Justice League delivers a Superman consistent with the character’s DCEU history.