MARS RED has been taking anime viewers by surprise with its evocative tale of vampires living in Japan’s Taisho era. The story is based on a stage reading play by the accomplished theater director and writer Bun’Ō Fujisawa. ANN reached out to director Kouhei Hatano and series composition writer/screenwriter Jun’ichi Fujisaku to learn more about how this unique story was adapted into animation. 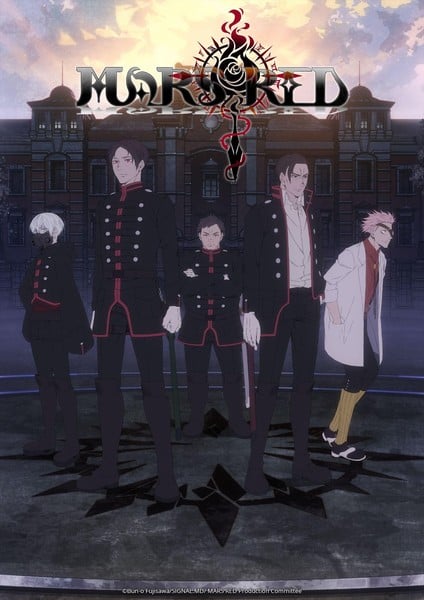 As your first series as a director, is there anything you want to accomplish with MARS RED? Are there elements you feel distinctly represent your creative vision or tastes?

HATANO: It was a very busy production (laughs). I made all sorts of over-the-top requests within the bounds of what was feasible. So I hope that it can be something that all the staff can be proud of participating in. I also hope that it can not only please the fans of the original stage reading play (of course), but that its depths can also catch the eyes of others, too.

As for the visual side of things, I wanted to avoid creating a look that makes lavish use of an artificial sweetener or synthetic coloring, a trend which has been on the rise these days. MARS RED depicts the question of how humans and vampires alike live in this world. If that world were to seem fake, it wouldn’t be a convincing story. So I thought of using the overwhelming power of the background art to create the backbone that supports the “world” of MARS RED.

I also asked the art team to challenge themselves with depicting emotions. I think that the same landscape can look different depending on the person’s emotions at the time. In other words, the colors and touches in MARS RED change depending on the characters that appear and their emotions at the time. I wanted the backgrounds to have significance to the world. In order to make that happen, I asked the color designer to create an enormous number of colors. I also asked the CG team to create designs that strive for realism. Finally, I asked the compositing team to fine-tune every single cut so that the nuances are not lost. It really was quite an ordeal for them, I think. However, everyone told me they had fun trying out all sorts of new challenges.

This might not be an answer to the question of “What is your creative vision?”, but I’m firmly convinced that if the professionals in the film have fun doing the job, then they’ll be able to create something good. It’s something I always keep in mind whenever I direct. I always get excited when I get shown a new world I know nothing about.

The series is presented with the theatricality of a stage play, from the character dialogue to the lighting to the aspect ratio. Was this always your intention for the adaptation or did it develop over time?

HATANO: The original work is a dramatic reading stage play, so I think there are parts that respect that. With episode 1 in particular, I suppose everyone applied themselves to it as a gracious tribute to the Fujisawa Reading Theater (laughs). Fujisawa’s dramatic reading stage plays are quite a wonderful thing to behold. There’s all kinds of thought applied to the visuals in order to express things. This probably includes the theatricality, but frankly, there are so many other elements packed into it as well. I hope that people watching it multiple times will be able to see something new in it every time. 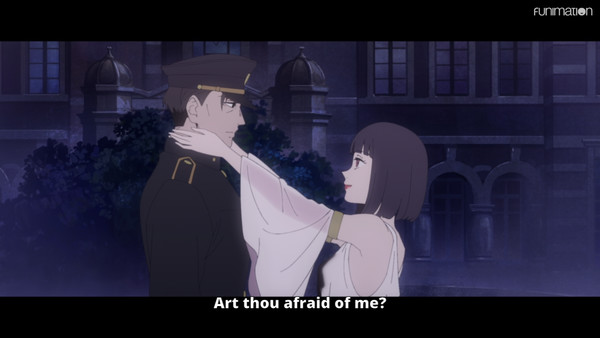 You have a lot of experience writing for horror genre works, such as Blood+. However MARS RED feels very unique. What do you think makes it stand out as a vampire story?

In previous vampire stories, the “strength” of the characters was portrayed as a defining trait, but in MARS RED their “weaknesses” are shown first. I think the vampires are very unique in how they feel the pain of living in early modern society.

In Blood+, for instance, the character uses their blood to take down vampires. It was depicted as the only absolute weapon. However, MARS RED takes the classical route. Although it doesn’t show them fearing the Christian cross, they can’t swim, they burn in sunlight and they don’t like the smell of garlic. Frankly speaking, they don’t have any cool parts. If you screw up in the way you handle it, it becomes a comedy. But in MARS RED, I think those comedy elements are framed as pathos.

The other unique aspect about the story is the mood of the era. There are perhaps a lot of people who feel the unique sense of romance around the Taisho period as a historical setting. Electricity had started to spread, cities were awash with lights, and the dark areas at night were disappearing. You could say that the mood of the era is symbolic of how the vampires are starting to lose the place where they once belonged.

Also, western culture was advancing with the architecture and so forth. Modernization was beginning to get comfortably familiar, and buildings designed by architects like Frank Lloyd Wright had become the essence of the town. Because it felt like a new era, people had their dreams, and that’s all the more reason why, underneath the marvelous human world, a darkness was beginning to take form.

Can you elaborate on the process of adapting Mr. Fujisawa’s stage play?

FUJISAKU: At first, I tried to arrange the screenplay in a way that follows the source material. However, the format of an audio dramatic stage reading play does not include images. It uses the voice actors’ performances and music to create an image in the audience’s heads. It’s identical to the techniques of Japanese rakugo. Because everyone creates their own images, it may be the case that an anime, which has to portray images in a distinct form, can’t surpass those imaginings. That was the risk I felt.

Also, because the characters of Kurusu, Yamagami, Maeda, Suwa, Takeuchi, Deffrot, Nakajima, and Aoi all have their own story developments, I had a feeling that it might lack dynamism as a series, so the first thing I did was rethink the theme of the anime series: The weakness of vampires is the strength of humans.

Also, it was the era just before Japan took the turn into its worst era, with slogans like Fukoku kyōhei (“Enrich the Country, Strengthen the Armed Forces”), and so on. Because of this, I thought that through depicting the “madness” of humans, I would be able to bring the weaknesses of vampires to the fore.

Also, this is a production-related reason, but if you’re doing a story that transcends time in an anime series, it can cause problems in the production if you make the characters age every episode. I want to avoid that, so I also thought of containing the story within a single year. So I made the setting hinge in year 12 of the Taisho era (1923), which was the climax of the source material. From there, I decided to tell the character stories.

Furthermore, when depicting the theme of “human madness,” I’ve been making the drama hinge on how to depict Shutaro Kurusu overcoming Yoshinobu Maeda, a man who you could see as invincible among humans. However, in order to depict the humanness of the seemingly invincible Maeda, I decided to create episode 1 as the story of him and Misaki. 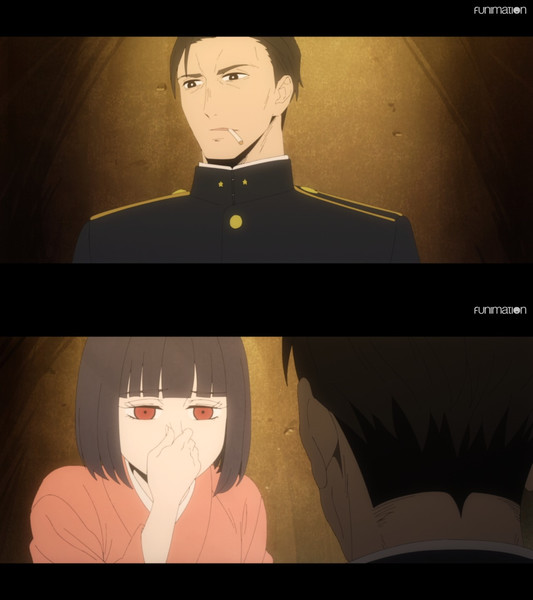 MARS RED‘s storytelling is unique to anime thanks to its subtlety. Was this a conscious decision? (Example: Maeda’s prosthetic, fiancee)

HATANO: I didn’t want to tell the entire story through dialogue. The words that are uttered don’t convey everything. I want you to think about what the characters were thinking when they said those lines, or why they won’t say anything. I want you to see the importance of that time. This is an era that seeks answers that are easy to understand. We hold the answers. However, it’s also important for you to consider how the people you are watching are feeling.

FUJISAKU: When I decided to tell a story, I decided that I wouldn’t explain anything more than necessary. I’ve been making it so that if you look into any of the elements that you can think of, you’ll be able to understand. Also, I’ve been conscious about structuring things so that when you look back on the story as a whole, you can reach an answer about what it’s about.

Why does Maeda have a prosthetic hand? If you look things up online and get into the MARS RED source material, you might see a hint.

When it comes to storylines like “who is Maeda’s fiancée?”, watching episode 1 may provide an answer.

However, I will not speak of the correct interpretation. I have a feeling that the answers that everyone arrives at are all valid. For international fans, is there anything they should know about the Taisho era and what it invokes for Japanese audiences?

HATANO: It’s simply a fantasy that makes use of the historical backdrop, so there might not be any prerequisite information that you need to know. Still, I hope that this anime can inspire you to learn more about Japan.

To Japanese people, the Taisho era has a strong presence through fictional works such as anime, I think. To be honest, there aren’t that many historical records, so it’s extremely difficult to research the period. We tried to recreate the Taisho era boundlessly while creating the era of MARS RED. I hope you can watch it without worries.

FUJISAKU: It’s not actually an era that I’ve seen for my own eyes, so I wouldn’t mind if you took it as fantasy, although there aren’t any swords or sorcery. If it does spark your interest a little, I encourage you to check it out online.

As far as Japanese people are concerned, I get the feeling that they think the same about the Taisho era. Everyone says it’s nostalgic, but it’s not like they’ve actually lived through it. Perhaps they want to escape from reality.

What do you think continues to draw audiences to vampire stories?

HATANO: Perhaps it’s because they’re beings that represent extremities that don’t exist in us humans, on both ends of the scale. That aspect of them gets the imagination flowing in all sorts of ways, maybe.

FUJISAKU: I wouldn’t have enough words to talk about the appeal of vampires. So to put it simply, it’s how unbalanced they are: they have the element of immortality but possess weaknesses. They may be referred to as residents of the night, but that’s because of their strong aesthetic elements such as the scent of depravity around them. Also, their appearances are human; for some reason we like to imagine them as attractive men and women, so I suppose that all sorts of stories can unfold.

Thanks to Kim Morrissy for translation.

MARS RED is available on Funimation