Content warning: this article and the novel itself discusses suicide.

Jun Maeda should be a familiar name to anime fans who have strong memories of the 00s and early 10s. He is best known for his script writing on nakige (tear-jerking game) such as Clannad and Little Busters!, and he also picked up attention for developing hit original anime such as Angel Beats!. More recently, he wrote the The Day I Became a God original anime, which debuted in October. Now he’s back yet again, this time with his debut novel published on May 17. 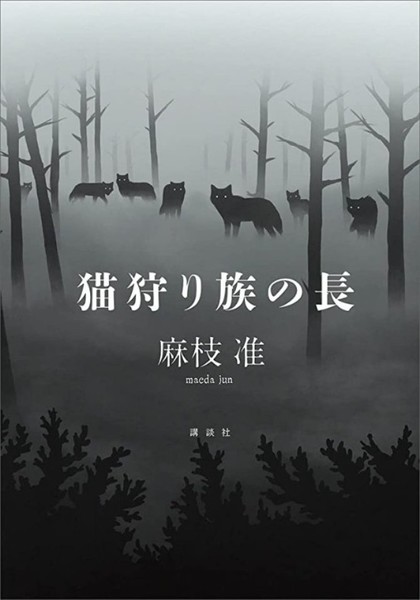 It was hard to know what to expect from Neko Gari Zoku no Osa (The Chief of the Cut-Hunting Tribe). Its cover doesn’t indicate much; it doesn’t even feature any of the wide-eyed girls that Maeda’s works are iconic for. In fact, there are no illustrations at all throughout the book. This initially made me think that it might be a lot more subdued than Maeda’s other works, which are infamous for their tonal whiplash. However, in the end, the prose and plot are very much what you’d expect from the man: Most of it is goofy dialogue, and then at the very end it takes an emotional turn.

The story follows two women: 19-year-old Tsubaki Toki, our point-of-view character, and a disillusioned music composer named Jūrо̄maru. The two meet when Jūrо̄maru approaches a popular suicide spot; as the lookout, Tsubaki’s role is to talk people out of suicide. Tsubaki doesn’t have much success in convincing Jūrо̄maru the merits of living, but she does earn a temporary reprieve when she reveals her unconventional name. Jūrо̄maru finds it so hilarious that she says she’ll stick around for another few days until she gets bored of it. For her part, Tsubaki decides to stay with Jūrо̄maru in the hopes that she’ll find something that will make the other woman want to keep living. And so begins their fleeting cohabitation.

Despite the morbid subject matter, the conversations between Tsubaki and Jūrо̄maru are whimsical and humorous, for the most part. Tsubaki starts with the “common sense” platitudes, to which Jūrо̄maru responds with her razor-sharp wit and keen observational humor. Jūrо̄maru seems to have so much fun ranting and going on inane tangents that at times it might seem hard to believe that she really wants to kill herself. On the other hand, this immediately struck me as a true-to-life depiction of a particular kind of depressed person, and how they can be some of the funniest people you’ll ever know.

Jūrо̄maru represents an interesting take on the tortured genius artist. Far from being convinced of her talents or feeling that her art is misunderstood, she downplays her achievements and insists that what she’s doing isn’t honestly all that difficult. She might have composed a chart-topping single, but she says that pop music is simplistic from a music theory perspective. A chapter where the two characters listen to a jazz concert and Jūrо̄maru breaks down exactly how it differs from her own music reinforces her conflicted, self-loathing feelings about her creations. Even as she emphasizes the difficulties of creating something from nothing and how she likes to be praised for her work, Jūrо̄maru can never bring herself to feel real pride in what she has accomplished.

Because the story is told through Tsubaki’s perspective, the narrative establishes a certain distance between Jūrо̄maru and the reader. On a surface level, the two banter and appear to get along well, but the sheer gap in their experiences makes it impossible for Tsubaki to truly grasp how Jūrо̄maru is feeling. The novel maintains a feeling of lightness even as Jūrо̄maru alludes to some of her heavier thoughts. On a literary level, this is probably the most interesting aspect of the novel. It uses humor not necessarily to disarm the reader or make them lower their guard for the emotional sucker punch, but to thoroughly establish Jūrо̄maru’s depression and the tensions in her relationship with Tsubaki.

On a fundamental level, Neko Gari Zoku no Osa is a love story. The characters get to know each other a little better in each chapter, as they go on mundane excursions together and chat all the while. Even as Tsubaki struggles to understand Jūrо̄maru, she’s drawn to her. She wants to save Jūrо̄maru, but she also simply enjoys hanging out with her. As time runs out, Tsubaki becomes more desperate to stay with her newfound companion, and she’s also forced to confront the nature of her feelings for her. The question, of course, is whether love can really save the day in this case.

It works as a simple yuri story, but I also appreciated how the queerness complements the narrative themes. Jūrо̄maru feels out of sync with the world around her in more ways than one, and part of her disaffection is with heteronormative expectations. On multiple occasions, she speaks of how she feels a hollowness about getting married and having kids. She’s dated many guys over the years, but for her it felt like going through the motions. Because she’s sick of this world and what it has to offer, she wants to find out what’s in the next world instead. In light of this, Neko Gari Zoku no Osa is ultimately a story about finding peace with oneself.

“Until now, I’ve written fabrications. For the first time I wrote what I’m really thinking,” Maeda commented in the book’s blurb. Because of the deeply personal nature of the novel, it’s easy to read it as a story about Jun Maeda himself. Like Jūrо̄maru, Maeda is a popular musician, and this gives the passages about music and art in particular a certain level of weight and authenticity. You can feel that Jūrо̄maru has the experiences to back up her observations. But at the same time, I don’t like reading stories primarily as a way of reconstructing the author through proxy. If the author has poured a part of themselves into the story, it’s so that it can ring true to life in general, and that’s the feeling that I got here.

Without the visuals or the emotional insert songs, there are certain Maeda quirks that aren’t present in this novel. It also focuses almost entirely on just two characters, so it lacks subplots about colorful characters to complement the main theme. Worst of all, there’s no baseball episode! Yet despite all these missing links, this felt very much like a Maeda story at heart. It’s a sweet novel that’s surprisingly easy to read, even as it explores heavy themes with an unflinching eye. Let’s hope that it gets an English release at some point.