“This story is a work of fiction … The circumstances are explained thoroughly in the source material novel.” 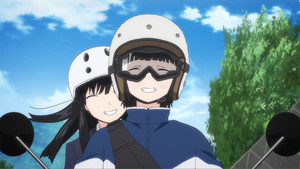 In episode 6 of the Super Cub anime, Koguma is shown riding a motorcycle together with her friend Reiko, despite the fact that it is illegal in Japan for someone who has owned a motorcycle license for less than a year to ride with another passenger. This apparent discrepancy drew attention online because of the anime’s attention to detail and accuracy, and because the motorcycle manufacturer Honda provided design supervision for the series.

Kadokawa responded to a request for comment from legal news website Bengo4.com regarding the anime’s depiction of illegal motorcycle riding. The full statement is translated below:

As the on-screen text in the anime states: This story is a work of fiction. Honda Motor Company provided its cooperation and supervision only for the designs in Super Cub.

Regarding the two characters riding together, the circumstances are explained thoroughly in the source material novel. This was shown a little bit in the anime in an abridged form, but in the aftermath there is a key scene. In this regard, the anime respects and preserved the flow of the source material’s story.

It was decided that it was necessary to go with this direction in order to develop the story in a way that respects the nature of the characters. Therefore, there is absolutely no intent to oppose the law or public morals. I hope you can enjoy it as an entertaining story (i.e. a work of fiction merely set in a dream world, and not reality).

Bengo4.com reported that the first volume of Tone Koken‘s Super Cub novels does indeed state that the act is illegal and delves into detail about the protagonist’s state of mind.

The anime premiered on April 7.