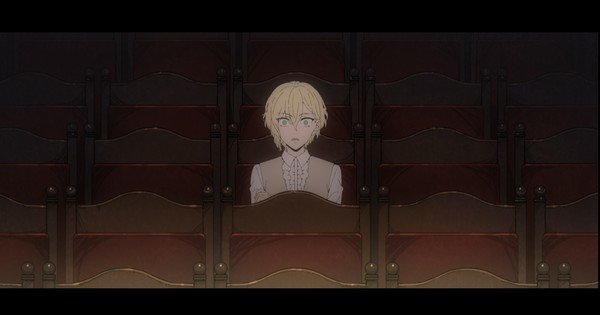 How would you rate episode 7 of
MARS RED ? 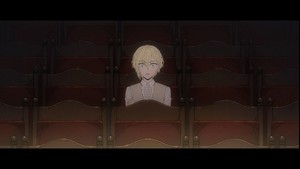 While it could have sustained the apocalyptic momentum of last week’s episode, MARS RED instead languishes in the last cliffhanger, leaving Maeda behind to bleed on the concrete so we can turn the clock back one year to focus on Misaki. It’s a bold move, and it works. Misaki’s mysterious evocation of Salome in her undeath provided the theatric scaffolding on which MARS RED built its premiere and its unique tone. However, she was less of a character and more of an accessory to Maeda’s beginning with Code Zero. Now, we see her as her own person, and she further contextualizes and enriches the events of the premiere, as well as the developments that follow. We may already know how her tragedy ends, but that doesn’t make her time beforehand any less important.

On the surface, Misaki’s normalcy stands out the most. When we first saw her, she was a renowned actress turned vampire, stuck cycling between the planes of fiction and reality. One year ago, however, she was just an aspiring performer pulling all the strings she could to land a role and some lodging in the Imperial Theater. She’s not preternaturally gifted. She’s bubbly. She looks forward to her letter correspondences with her far-off fiancé. She’s an ordinary woman with big dreams in the big city, and she doesn’t know anything at all about vampires.

Misaki is extraordinary in many ways too, though. It’s unusual for a woman to be living in the attic of a theater (let alone with a vampire, but we’ll get to that), especially given the time period and the fact that her father is a high-ranking officer in the army. Her dissatisfaction with her home life and with her absent father is what inspires her to strike out on her own as an independent woman. That’s no small feat, and the episode emphasizes this by telling her story in parallel with Shirase’s. It’s far from the first time MARS RED has compared the two women, but it’s never been as blatant as it is here, down to their almost indistinguishable appearances. They’re both doggedly pursuing their careers, separated from the soldiers they care about, but no weaker for it. Although their paths cross only once at a performance of Salome, Misaki leaves an indelible mark on Shirase. Shirase’s excited talk about flappers also brings to mind the evolving gender norms of the 1920s. I wouldn’t call MARS RED explicitly feminist or anything, but it seems to understand that it can’t wax poetic on modernization without an understanding of what it meant for women of that time period. That’s good to see, even if the show’s cast of female characters are largely secondary and/or dead.

Misaki’s friendship with Defrott forms the backbone of the episode, and it provides a ton of important context for both of their relationships with Maeda. On the surface level, it’s just very sweet. The reclusive Defrott learns to open up to another person, and Misaki finds a friend and teacher who cares about her irrespective of her father’s rank in society. To this effect, the most important scene is their discussion of Salome’s monologue. At Defrott’s behest, this is the point at which Misaki stops treating him like a child, as she instead internalizes his pointers as her more experienced peer. I love, too, how the voice actors here craft their performances. Misaki’s first read of Salome really does sound as amateurish and overwrought as a “threepenny play,” while Defrott’s rebuttal immediately sounds much more nuanced and mature. It’s also a bit spooky, because as soon as he begins, we recognize the cadence that Misaki eventually adopts and evokes in the premiere, emphasized by the identical gestures and storyboarding. It drives home not only the craft of this anime, but the craft of theater in general, and all the beautiful subtleties of acting.

We also learn that Misaki, more than anything, wanted Maeda to see her performance as Salome. Defrott scoffs at her letter-only relationship with her betrothed, calling it antiquated and comparing it to Cyrano de Bergerac. In that play, the protagonist Cyrano ghost-writes love letters to help his friend woo the beautiful Roxane, whom Cyrano secretly loves, yet feels too ugly to win her affections for himself. It’s a famously complicated tale of romance and tragedy, and Defrott unsubtly references it to suggest that there’s no way for Misaki to know what Maeda is truly like through writing alone. However, I think the more important point brought up by the mention of Cyrano is Defrott’s silent jealousy. Whether or not it’s romantic in nature (the mention of Romeo and Juliet in this scene suggests it is), Defrott clearly develops a lot of affection for Misaki, which grows as he sees her performance of Salome evolve. Like Cyrano de Bergerac, though, these affections remain unspoken and unrequited. All he can do is be an intermediary, giving the dying Misaki his blood, so she can show Maeda her Salome. That is, with all the dramatic irony of a Greek tragedy, all she can show Maeda, until their last moment together flickers away with the dawn.

Oscar Wilde‘s play ends with Herod killing his daughter Salome, crushing her under the weight of his guards’ shields. Thus, it’s not surprising that Misaki’s death is a consequence of her father’s actions. Nakajima’s alliance with Rufus apparently extends far back before Maeda’s return to Tokyo, which supports Misaki’s premonitions about his work. Despite the play’s context, however, I doubt Nakajima ordered Rufus to silence Misaki—it seems far more likely that Rufus took the initiative on his own. Nonetheless, Nakajima bears the responsibility. He probably realizes this too, at least subconsciously, which might have accelerated his villainous descent. If he doesn’t realize it, though, this may be the wedge that separates him from Rufus in the future. As of now, I actually hope this doesn’t happen, because I think Nakajima is a much more compelling villain, especially if he was willing to accept his daughter as collateral if it meant his dream being fulfilled. Rufus clearly has his own stuff going on too, but we need to spend more time with him before he can bear the yoke of the primary antagonist.

Defrott concludes his recollection of Misaki by staring at her dying fiancé. He is again presented with the choice between letting someone die or giving them a chance to survive, albeit cursed by his own blood. It’s not a choice he makes lightly, because Defrott, as this episode proves, is indeed a good person. He turned Misaki so she could fulfill her promise to Maeda, and now in turn he will do the same so Maeda can fulfill his promise to her. That’s not to say he doesn’t have personal motivations, however. I think he genuinely wanted to save Misaki’s life because he loved her. Now, between Nakajima’s and Rufus’ actions, he seems to see the writing on the wall for vampires (“our twilight years”) and wants Maeda to fight alongside him for whatever scraps of dignity they can keep before the old world is crushed into a heap of rubble. True to MARS RED and his profession, he of course frames this request in the language of theater. After all, the world will continue to turn, and it will not care about who or what gets left behind. The most anyone can do is choose to perform on the stage provided to them. 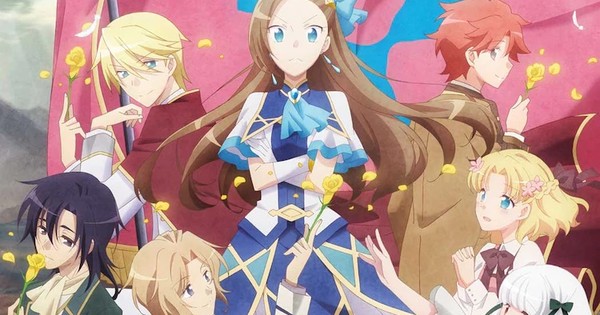 [ad_1] Muse Asia announced on Facebook on Tuesday that it will stream episodes of the television anime of Satoru Yamaguchi and Nami Hidaka‘s My Next Life as a Villainess: All Routes Lead to Doom! (Otome Game no Hametsu Flag Shika Nai Akuyaku Reijō ni Tensei Shiteshimatta…) light novels daily on YouTube from May 25 to…

Judging from trailer, it was obvious that Beastars is a punch of delightfully power packed elements of society that will make you re-think how you see life. With great power, comes great responsibility… and misery. Here’s our take on the anime and why or why not should you be watching Beastars. And it is spoiler… 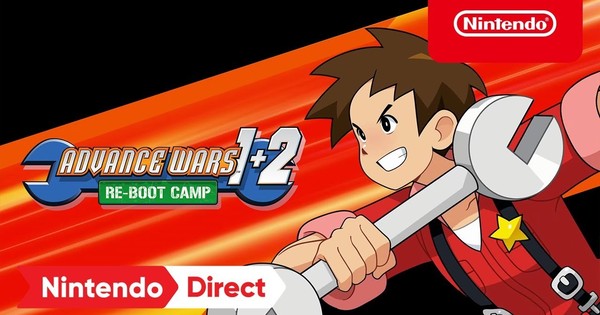 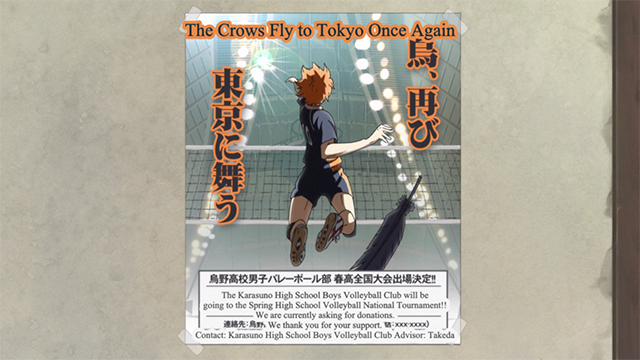 [ad_1]   This article written by Kyle Cardine was originally published on January 10, 2020   Note: Dan Dockery contributed to this quiz   After four long years, the Karasuno High School volleyball club boys are finally coming back with Haikyu!! To The Top (which you can watch right now along with the OVA Haikyu!! Land… 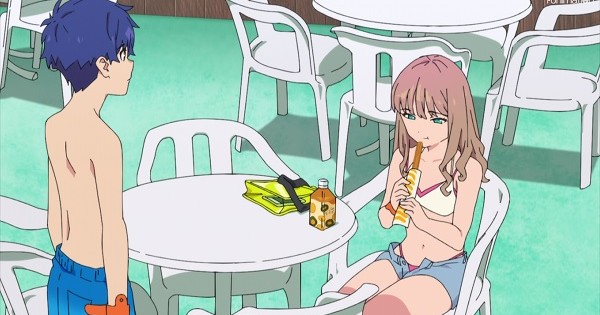 [ad_1] There’s this scene about halfway through this week’s episode of SSSS.Dynazenon, wherein a single camera shot is held on Yomogi and Yume as they engage in an agonizingly awkward non-conversation about the churro Yume is eating. It lasts a solid thirty seconds as they force out microscopic vocalizations in an effort to fill supposedly-social… 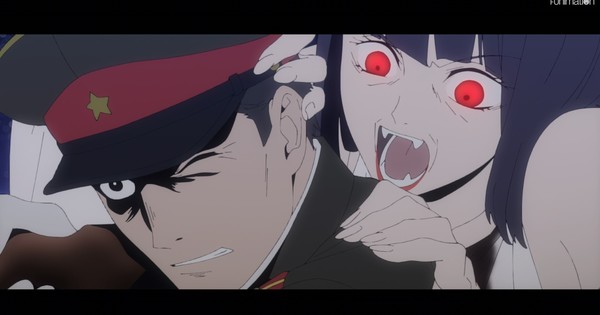