How would you rate episode 13 of
MARS RED ? 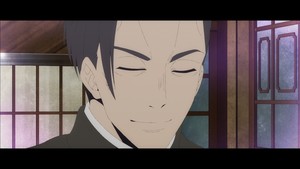 Frailty, thy name is vampire. Not many works would be able to get away with speaking that Shakespeare paraphrase while wearing a straight face. And to be perfectly honest, I don’t know if MARS RED belongs in those ranks, but I respect it for trying. In fact, this finale is buoyed by its confidence, as it eschews any temptation to throw last-minute curveballs at its characters. Instead, its conclusion feels like a natural resting point. Maeda’s story ends in an appropriately somber fashion, while Kurusu’s story begins in a defiantly affirming one.

In retrospect, it’s not at all surprising that Maeda succumbed so completely to the vampiric curse—losing his faculties and trapping himself in the recesses of his own mind. Vampires in MARS RED are a manifestation of an older world, and Maeda was stuck in the past well before Defrott tried to save him. He couldn’t move on past Misaki. He couldn’t abandon the loyalty he felt he owned Nakajima. This episode provides some additional context that further explains this weakness of his, but we already had plenty of evidence that this was inevitable. The world is changing faster than people like Maeda can handle.

Kurusu, therefore, acts as Maeda’s foil. He’s younger, more flexible, and thus more willing to make compromises with his vampirism, even if that makes him “weak.” This tension between the past and progress, between vampirism and humanity, remains the core theme of MARS RED. It resides in the interior conflicts of these characters, and it extends into stages as big as Japan itself. It’s a continuum, but MARS RED‘s arc definitely bends towards the side of progress. After all, it’s Kurusu, who can actually see and appreciate the friends and contemporaries who rely on him, who ends up winning the battle. And it’s only in his final moments that Maeda realizes he was never alone; he was just too fixated on his past losses to see his present gains.

I really like how the finale stokes emotion from Maeda and Kurusu in contrasting ways as well. With Maeda, it’s through his hazy conglomeration of memories and dreams, showing him (and us) specters of the people who were important to him, and imagining a happy future that will never be realized. He can drink with Yamagami again. He can watch Misaki perform for the first time. He can spend his days idly playing shogi with his father-in-law. Except none of this will ever happen outside of his fantasies, no matter how long he lives. By contrast, Kurusu and his Code Zero companions have taken steps to ensure a future for the people they care about. In Kurusu’s specific case, however, it comes with a tragic paradox: he can only affirm his humanity by accepting his vampirism, and he can only do so alongside Shirase, whom he will certainly outlive. Despite these inevitable sorrows, he still chooses to push forwards. He chooses a life with Shirase, and he gifts Maeda a final resting place right next to Misaki’s.

The finale does respectable work honing the interior emotional struggles and resolutions of Maeda and Kurusu, but it does a considerably worse job selling their exterior conflict as the climactic centerpiece. As much as I understand the thematic importance of what MARS RED has going on here, it doesn’t translate into a compelling final clash between its two protagonists. It’s just hard for me to care when Maeda has been going berserk in the shadows for the entire second half of the series. The swordfight can’t be imbued with any kind of personal or ideological conflict when one of the combatants can’t do anything besides growl his dead fiancée’s name. It’s tragic, yes, but I prefer my tragedies to have a little more emotional scaffolding.

Defrott, thankfully, returns to the stage one last time to do what he does best: recite some poetry on top of a roof. This time, it’s William Blake’s “A Little Girl Lost” from his collection Songs of Innocence and of Experience. Among other things, it provides some connective tissue between Defrott’s aforementioned paraphrase of Shakespeare and the original line from Hamlet, “Frailty, thy name is woman.” Blake writes about Eve’s fall from innocence, but he writes from a perspective sympathetic to Eve and critical of God’s wrath. Therefore, we can conclude that Defrott is reciting this out of sympathy for his fellow vampires, who may be cursed beings who have fallen out of God’s favor, but who deserve happiness all the same. And while Hamlet speaks the original line smoldering with anger towards his mother, Defrott’s reading is much more compassionate. No matter the age, vampires will be beset with danger and tragedy, always dancing on the razor’s edge that divides light from dark. It’s an ephemeral existence, but it’s beautiful all the same.

With the full season now behind us, I don’t think MARS RED ever recaptured the moody pretentiousness that enamored me with its premiere. However, it still managed to deliver a memorable and funky little vampire experience with a strong sense of identity and ambition. Its ideas just outpaced its grasp of the fundamentals, and in the end, both of those facets left me wanting. Luckily for MARS RED, though, I will always defend an ambitious series that falls short over a middling series that treads water. In a less-stacked season, this might have even been one of my favorites, but it’s not the show’s fault it had to be measured against stuff like SSSS.Dynazenon and Odd Taxi. Messiness aside, in the future, it’ll be nice to have MARS RED in my back pocket just in case anyone wants a recommendation for idiosyncratic vampire fiction.