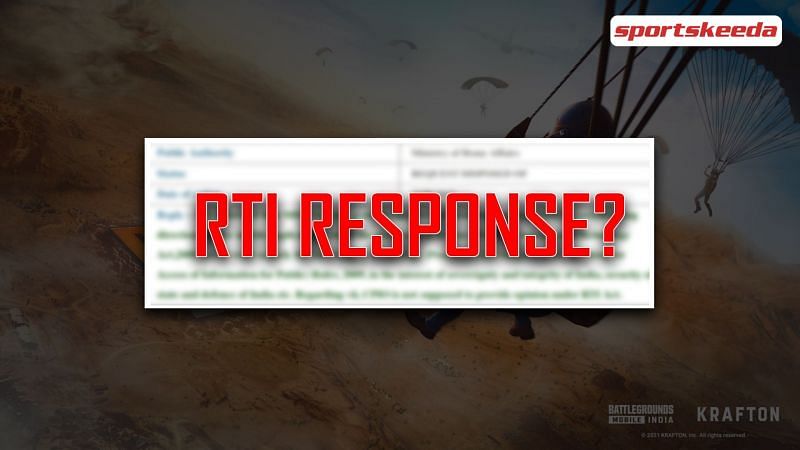 A response to an RTI filed by Dr Gaurav Tyagi has revealed that neither the MHA nor MeitY has a role in granting permission to launch Battlegrounds Mobile India or any other application in India.

Battlegrounds Mobile India has been making headlines since it was announced more than a month ago. Pre-registration has already begun and includes various rewards like the Recon mask, Recon outfit, 300 AG, and the Celebration Title. Although the developer hasn’t laid out an exact release date, anticipation for its release is at an all-time high.

The fact that PUBG Mobile influencers like Sagar “Maxtern” Thakur, Abhijeet “Ghatak” Andhare, and Ocean Sharma have hinted that the game could launch on June 18th has further added to the excitement.

Politicians like Ninong Ering, former Arunachal Pradesh MP and sitting Congress legislator; Member of Parliament from Telangana, Arvind Dharmapuri; and Member of Parliament in Rajya Sabha, Abhishek Singhvi, have voiced their opinions against the release of Battlegrounds Mobile India.

These responses clear most of the questions in the minds of users around Battlegrounds Mobile India’s release.

Also read: Battlegrounds Mobile India and PUBG Mobile likely to introduce Season 1 (SS1) with next patch, according to latest leaks

MHA and MeitY have no role in granting permission for the release of apps in India, as per reply to an RTI regarding Battlegrounds Mobile India’s release

As part of my research on predatory practise of Chinese companies in India and it’s impact on National Security, had filed an RTI about the relaunch of PUBG Mobile in India by Krafton (in which the Chinese behemoth has the second largest stake). pic.twitter.com/WL5rkThdOb

Dr Tyagi, the JNU assistant professor, had filed multiple RTIs seeking information from the Ministry of Home Affairs and the Ministry of Electronics and Information Technology seeking their role in releasing the apps.

“Ministry of Electronics & Information Technology has a role in granting any permission for entry of PUBG or any company/Mobile App in India.”

In the meantime, the response for the other RTI read:

The developers have been dropping videos and artwork on their handles. Players can follow the official handles through the links given below: