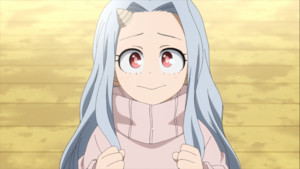 I knew this day would come eventually, but it’s still pretty surreal to see the episode number hit 3 digits. There are of course many series with significantly longer runs – One Piece is due to hit 1,000 episodes in the next six months or so – but it’s still pretty rare for a show to break a hundred episodes, especially in the modern TV anime landscape. It would stand to reason that such a momentous occasion would call for some kind of larger spectacle in commemoration, but “The New Power and All For One” instead opts to wind things down from the previous arc, sifting through the various grains of character development sprinkled across the joint training session before building towards the next conflict.

First up is Deku, who’s slowly coming to grips with knowing he’s got a half-dozen new powers to figure out on top of still mastering One For All in its base form. Like the helpful classmate and good friend that he is, Bakugo offers to beat the crap out of our protagonist to help him unlock those powers, but it seems the issue is more to do with Deku’s hesitancy than any necessity for danger. Between the explosive debut for Blackwhip and the clear parallels to All For One’s stockpile of quirks, our sensitive ferret of a main character isn’t sure how to feel about all these new changes. OFA is a gift he’s never totally felt confident accepting, especially as its history has been made known, and now it can’t help but feel like an ominous burden.

Fittingly enough, it’s another character with a “cursed” power that helps Deku get out of this funk. No, not Monoma. That boy is just plain cursed. I mean, just look at him scaring Eri! You know who else scared Eri? Overhaul, aka a villain. The parallels are loud and clear; your days on the outside are numbered, Monoma. More importantly, the experiment with Monoma copying Eri’s power gives us some insight into how both quirks work. Monoma can copy the nature of a given Quirk, but not the resources the user has accumulated or converts. So when he copied OFA all he got was the form it took within the first user, with none of the previous 8 lifetimes of built-up power to call upon. That tells us that Eri’s rewind power stores up something in order to activate, but it’s anyone’s guess what that is right now.

Of course, all of this focus on her power only serves to remind Eri of the damage her quirk has helped bring – indirectly stripping one of her personal heroes of his power, while nearly destroying the other when it went out of control. Deku, ever the altruist, reassures her that while her power can indeed be dangerous, it also has the potential to be as good and benevolent as she is – and that’s a lesson he realizes he’ll need to internalize himself. Whatever abilities fate or chance have delivered to these kids, it’s up to them to decide how to best use it with kindness and compassion. It’s scary and it’s complicated, but they’ve got eachother and their friends to support them on that journey.

Though on the topic of out-of-control power, it’s time to start the next arc by introducing a rampaging new team of villains. And I’m sure these new guys will be just as intimidating as the League of Villains or a ruthless as the Shie Hassaikai, so let’s see what they can- what’s that? Oh these guys don’t even get names, and are immediately clowned on by freshly licensed Bakugo and Todoroki? Well then. Everybody go back to chilling in your comfy sweaters and enjoying tea, nothing to see here.

Actually it is rather nice to see 1-A’s problem children finally make their semi-pro debut. The guys they face aren’t particularly threatening, but the short fight is more about showing how our two heroes have matured since the license exam. Bakugo reigns in his explosions to minimize damage while prioritizing both retrieving the stolen goods from the villains and protecting civilians (plus All Might) caught in the chaos. Todoroki acts quickly and decisively with his flames, utilizing a new ultimate move he developed from his fight with Deku. There are also some potential hints at some scheme brewing in the background – the lead villain seems to have a new support item that boosts up his power way beyond what he’s capable of, with one hero commenting it’s some type of black market weapon. That suggest somebody – either a new or old villain group – is setting something up. But we’ll have to see how that shakes out later.

For now, this makes for a decidedly subdued 100th episode, but unlike some of the weaker preceding entries it’s MHA purposefully being chill, which is where it often shines. Be it Kirishima and Tetsutetsu reaffirming their Hard Bois bromance, blink-and-you’ll-miss-it jokes like Kuroi getting jealous at Tokoyami talking to Kinoko, or quietly somber moments with Todoroki finally texting Endeavor back, there’s a number of quiet character moments that help make this whole mess of superkids feel well-rounded and likable. My only real complaint is there’s not a little bit more of that – but that’s the right kind of problem to have.