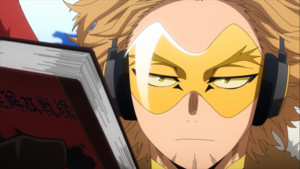 Welcome back to My Hero Academia everybody! This episode’s Word of the Day is “Ominous!” Can you say that with me? Ominous!

We’ve known for a few episodes now that something is going on in the background. From the conspicuous support items popping up around villains, to the sudden destruction of a city under mysterious circumstances, there are rumblings in the world of villains that our heroes just aren’t privy to, but are bound to become relevant sooner rather than later. “Off to Endeavor’s Agency” does indeed feature Deku and The Boys – as I will be exclusively referring to this boyband trio for the rest of the arc – beginning their work study with the new #1 hero, but the real star of this episode (and the new ED) is Hawks. And the secrets he brings to relative light paint a very grim picture, even as the details are still mottled in shadow.

First off, remember that small detail about Best Jeanist being missing last week? Turns out that was Hawks’ doing. At the behest of Dabi, his only contact into the League of Villains, he seemingly made the Denim Do-Gooder disappear as a sign of both his power and loyalty to the cause. We don’t see exactly how Hawks pulled off that particular trick (Surely the government’s own personal super agent wouldn’t merc a civilian to keep his cover, right? Right??), nor how the League takes it, but that’s just one of a dozen mysteries brought up around Hawks this episode. The next time we see him, weeks later, he’s inexplicably shmoozing it up with a completely different and much more well-supplied group, including that random hero we saw briefly a couple of episodes ago, Slidin’ Go. For most of the episode it’s a mystery who they are, but considering they have the tech to plant listening devices on Hawks and record every person he encounters, it’s safe to say he is playing a very dangerous game.

Meanwhile, Deku and The Boys’ work study with Endeavor gets off to an early start when they encounter a villain not two minutes after being picked up, and fitting the ever portentous atmosphere of this episode, it’s a street preacher proselytizing the oncoming apocalypse. Really, I’m surprised we haven’t seen more people like this guy already – you get this type in any city big enough to accommodate extroverted weirdos, and considering how dangerous a world with actual superpowers can be, I’d expect to have one of these bozos on every corner. Endeavor makes quick work of him, but not before the “Servant of the Stars” calls him out in particular as a harbinger of darkness. Normally you could chalk that up to some passive-aggressive trash talk from a guy getting lowered into a police car, but this is a comic book story so chances are it’ll come true sooner rather than later.

One possibility eventually rears its head in a very roundabout way, as Hawks arrives to steal Deku and the Boys’ thunder and then spontaneously begin recommending what looks to be MHA’s equivalent of The Fountainhead to Endeavor, complete with an annotated copy. Now, we’ve actually seen this “Meta Liberation War” book a few times. It was sitting in store windows during last season’s penultimate episode, and Gentle Criminal briefly mentioned its author, Destro, as one of the most infamous villains of past generations. That the manifesto of a historically documented Villain is being reprinted and distributed signals quite a few things, but chief among them is a rising sense of unease with the current Hero dominated society. We don’t get to actually read the book itself, but if Hawks’ explanation about “personal responsibility” is any indication, it seems to advocate for what MHA‘s current society would call vigilantism – a trend that’s been quietly simmering since Stain’s own manifesto went viral way back when.

That’s actually one of the interesting things about MHA‘s worldbuilding that keeps coming back. While it’s somewhat simplified and exaggerated – this is still a Saturday morning cartoon aimed at a young audience after all – its approach to its larger worldbuilding is remarkably grounded. Here, figures from the past who left a mark on history persevere through their works, and are then brought up again and re-contextualized for the modern world. We’ve been told several times that society is shifting in the wake of All Might’s retirement, and it may just be trending towards people besides designated and trained heroes taking things into their own hands. In fact, that may have already happened.

Predictably, Hawks isn’t actually flying around handing out the book because he’s super down with its ideology – rather it’s both a cover for the people listening in on him and a coded message he’s sending to Endeavor in particular. That message immediately ups the stakes a hundredfold – he’s infiltrated an actual factual “Liberation Army” who stand over 100,000 people strong, and they’re making their move in four months’ time. That’s both a big deal and begs a lot more questions. How in the hell have over 100k followers managed to gather without a hint of them until now? How did Hawks get involved with them, especially when he was originally infiltrating the League of Villains? Does that mean Shigaraki and his misanthropic misfits are involved in this too? Just what in the hell is this army planning to do, and what can Hawks and Endeavor do on their own to stop it?

So yeah, with Hawks’ little message, MHA‘s stakes have gone from dead still to dead sprint in the blink of an eye. Suffice to say Deku and The Boys won’t be getting your typical work study experience – here’s just hoping this one has a lower body count than the last one.