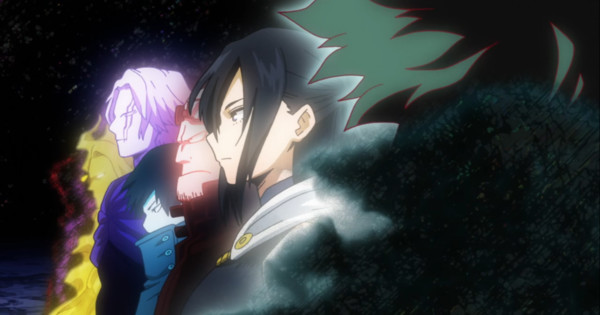 Since every new MHA season starts with a recap episode, it can be frustrating for fans who just want to dive back into things right away. I suspect the anime staff sympathized with that frustration, because following up the after-credits teaser last week, “Vestiges” jumps right in with a heaping helping of charged character moments, plot twists, and lore-altering reveals, all of them loaded with a whole lot of questions and serious implications.

First up is Hawks, who we last saw in a classic abandoned warehouse for a meet-and-greet with Dabi. Turns out this duo, who manga fans have taken to calling Hot Wings and now so will I, had originally set up a plan to lure some notable heroes into a battle to test the High End Nomu’s capabilities. Problem is neither side fully trusts one another, so Dabi sent the monster in ahead of schedule, leading to the catastrophe in season 4’s finale. Hawks, meanwhile, was just too good at saving people and prevented any major loss of life in the whole affair, which isn’t what Dabi is looking for in a partner in crime. So congrats boys, you destroyed a whole lot of buildings, messed Endeavor’s face up real good, and left nobody happy. Well okay, Dabi’s a little happy about that big old scar on the new #1’s face, but edgelord schadenfreude isn’t enough to build a villainous business relationship on.

Of course, things can’t be that simple, and immediately after this confrontation we learn what’s really up with Hawks. He’s in fact a double agent, pretending to betray the other heroes in order to infiltrate the League of Villains and stop them once and for all. That’s a dangerous tight rope to walk, and it would perhaps seem noble that Hawks would take such a task upon himself, were it not for the snippets of backstory informing us that this is just the latest mission assigned to him by the Safety Commission, who took him in as a child.

Now yes, MHA technically stars a lot of kids training to be heroes, and like most battle shonen that means skirting the line around stuff like child soldiers for the sake of making an appealing power fantasy for younger viewers. But the Hawks we see in the flashback is a kid. As in he was still carrying around a plush Endeavor doll. That single image raises a ton of questions about the ethics of the government higher-ups who enlisted a 6-year-old as a future secret agent, and it paints a much more cynical picture of Hawks’ personality. He may very well be following these orders of his own will, and his admiration of Endeavor seems totally genuine, but the implications of having been raised his entire life to be a hero are…troubling, to say the least, and it makes his self-deprecating tagline of “too fast for [his] own good” feel even heavier.

Speaking of heavy, after a stint in the hospital it’s time for Endeavor to confront his family for the first time since his big change of heart. And boy, if you thought a trio of kids confronting their abusive father would be awkward as all hell, you were 1,000,000% right! What follows is a remarkably authentic confrontation where everyone’s left upset, unsatisfied, and nothing is really resolved. And that’s a good thing! MHA is dealing with an extremely sensitive story about a family that was destroyed by its patriarch and has been left to pick up the pieces while he slowly figures out how to stop being a monster. That’s not something that can or should be resolved by a simple apology or solved in the margins of a larger narrative, so I’m very thankful the series recognizes that. However the story of the Todoroki family concludes, it has to be a long, involved one to not feel like cheap sentimentality.

The characters recognize that too. Natsuo, the middle brother, has precisely zero patience for his dad’s stunted words of atoning and storms out in order to avoid upsetting his sister by starting a full-on brawl. Fuyumi’s still hurt though, and breaks down seeing their family go right back to fighting despite all the progress Shoto’s made since reconciling with their mother. While I’m personally skeptical of any attempts for their family to come back together, I do understand why Fuyumi in particular might want that. As the oldest (present) child, and from the small scenes we’ve seen of her with Shoto, it’s implied she’s had to shoulder a lot of the responsibility since Rei was hospitalized, and that can’t have been easy. So even if it’s not the healthiest option, I get the impulse for wanting to return to when things were normal, even if “normal” just meant “less outwardly terrible.”

Then there’s Shoto. Shoto’s never been one for huge displays of emotion, but you can tell just from his demeanor that he’s far from ready to accept Endeavor back into his life with open arms. He’s willing to work with the man to grow as a future hero, but considering the absolute ice burn he lays down the moment he sees his dad, it’s clear he’s not suddenly gotten over years of abuse. I certainly can’t blame him for it either – the universe sets you up for a dunk that dramatically ironic, you go for it. More to the point, while he acknowledges that Endeavor did something genuinely heroic in the nomu fight, he also recognizes that’s not the same thing as making up for all the pain he’s caused getting there. Whatever direction Endeavor’s supposed quest for atonement will take, this is merely the starting line, and he has mountains of work to do before he can answer for what he’s done.

Fwoo, that’s a lot, but y’know, I appreciate that MHA can have so many relatable, human characters to make this kind of conflict feel as dire and genuine as it needs to be. Though I’m hoping that next week will offer some lighter fa- wait why are there still 8 minutes left in this episode?

Okay. So. Not content with ending on a matched set of murky, morally complicated storylines, this episode returns to UA so Deku can have some more ominous foreshadowing dropped on him. In a dream he sees the titular vestiges of previous One For All users, before being treated to the partial origins of the power. It’s here we get our first good glimpse of the younger brother who started this generation-spanning battle against All For One, but more than anything we just get a look at how AFO came to power in the first place.

It’s been implied for ages that the early decades of society developing Quirks were tumultuous, and now we see a little bit of how that played into the big bad’s rise to power. As superpowers became an inextricable part of society, the ability to control and exchange them would logically become all that more powerful. Whether through granting powers to those who desired them, or taking them away from those feared or persecuted for something they never asked for, AFO was able to build power both in the superhero sense and as influence. It’s a startlingly grounded glimpse into what the world presumably looked like before All Might ushered in the now-crumbling current era, and it’s all capped off with something ominous happening to Deku’s arm as he wakes up.

So that’s a LOT for one episode of this show, but it’s the good kind of a lot that leaves me excited and buzzing to see where we go from here. As MHA goes on, the history of its characters and the world around them only gets more complicated, more messy, and raises deeper questions than the initial stories of heroes and villains first promised. It’s been fascinating to see the series progress for so long, and I’m very interested to see where we go from here.