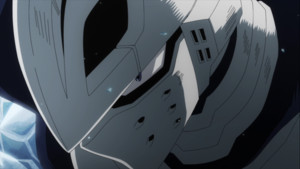 With Momo and Kendo’s match concluded, it’s time for the next round, featuring two established heavy-hitters on 1-A’s team, and the only other established and likable member of 1-B left on the other side. Though since Kendo’s master plan caused a ton of damage to the current training field, the teachers decide to take a quick break. It’s mostly an excuse to avoid hopping immediately to the next fight, but I do respect that MHA takes its superheroism seriously enough to lecture the students on collateral damage. It’s all well and good to capture ne’er-do-wells, but don’t expect a ton of accolades if you level half the block in the process, kids.

There’s also a short scene with All Might pulling Deku aside for another chat about One For All, but as neither of them have learned or figured out anything new, it’s largely a reminder for the audience that yeah, something’s up with Deku’s Quirk and it’s probably going to act up when we finally reach Round 5. Though I do appreciate Bakugo calling them out on how bad they are at keeping Deku’s apprenticeship a secret. It’s a fun, small character moment that emphasizes how much his and Deku’s relationship has changed, and the kind of writing that’s largely been in the background while the rest of the class get their moments to shine.

Speaking of, Todoroki’s finally up to bat, and his turn starts with an incredibly awkward scene with Tokoyami, who tries to be encouraging by talking about their connection as the proteges of the new Top 2 heroes. Obviously the bird boy is trying to be supportive in his own edgelord way, but the pep talk only serves to remind Todoroki of the hurdle standing in his path. While everyone at UA has their struggles, their journey towards improving their Quirks is decidedly less emotionally fraught than Shoto’s, as there’s seemingly only one person who can help him further master his flames, and it’s the monster who first made him forsake them in the first place. Even disengaged from the question of whether Endeavor will or can improve himself, Shoto becoming the hero he wants to be means repeatedly facing the trauma that nearly destroyed him and his family. That’s a whole lot of baggage to carry into what’s supposed to be a glorified Field Day at school, and it’s a pretty darn heavy shadow in what is otherwise a light and breezy episode. I do really like the detail that Shoto’s been leaving his flaming turd of a dad on Read for days on end. That’s just good, grounded character writing.

However our Icy-Hot hero doesn’t have long to contemplate all this, as Team B is ready to get this fight started ASAP. Tetsutetsu takes the lead, but seeing as he has all of 2 brain cells that occasionally collide and make pretty sparks, his strategy is to charge head-on into battle and see who can come out on top in a brawl. It works about as well as you’d expect considering they don’t have any effective long-range fighters, but thankfully Honenuki, aka “Mudman” is the actual brains of the operation and makes this fustercluck of a fight work for his team. I’m actually impressed how quietly clever his strategy is in the start of this scuffle, effectively separating the enemy team and arranging for some pretty even match-ups, all on top of neutralizing Iida’s speed.

That’s right, after nearly 2 full seasons of fading into the background, Iida is back with a new and improved ultimate move: Recipro Turbo! He’s suped up his leg engines and maximized his efficiency to become the ultimate speed demon, and all it took was uh, hold on, let me just check my notes…oh sweet JESUS.

…Alright. So, one of the neat quirks (heh) of MHA‘s superpowers is that they are inherently organic features. Characters don’t get power through magic blessings or tapping into the speed force, but instead develop them as extensions of their bodily functions. Iida’s particular brand of speed is especially interesting, as he’s a naturally occurring cyborg, meaning his quirk can grow through both organic training and mechanical tune ups to improve. The downside is that apparently one of the power-ups his family figured out through the generations was to rip out their god damn exhaust pipes and let new, stronger ones grow back in like shark teeth. You’d think something that body-horror adjacent would call for a sterile medical environment, but apparently Iida was so gung-ho about the idea he bit down on a towel and got right to it in the middle of the forest. My boy. My sweet boy. Please chill just a little bit.

Mild stomach-turning nonwithstanding, I do like this development. For one, it’s a neat and unique way for Iida to get stronger quickly, while still demonstrating his resolve. Just speaking from personal bias, I love speedster characters (my favorite western superhero is The Flash, specifically Wally West‘s tenure) and now that our class president can move at top speed for a full 10 minutes, that all but assures some ridiculous fast-paced hijinks. More than anything though it’s just nice to have Iida be relevant again, even just for this battle. He was one of the early highlights of MHA, and while he’s gotten lost in the shuffle as the show’s scope has expanded I still love seeing him around and getting to do cool stuff. So here’s looking forward to next week and seeing Recipro Turbo in action!