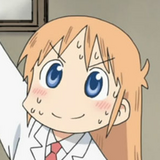 Last night marked the 10th anniversary of the first episode of the TV anime adaptation of Keiichi Arai‘s Nichijou – My Ordinary Life manga series. The manga series also began in December 15 years ago. To celebrate the occasion, the manga creator released a very Nichijou-like animation of Yuko on his Twitter account.

The animation is a gif, just give it a minute to do its thing!

Nichijou – My Ordinary Life was adapted by Kyoto Animation in 2011, with direction from Tatsuya Ishihara and series composition from Jukki Hanada. The series started on April 2 at 26:20 on TV Aichi (effectively, 2:20 AM on April 3), and quickly became a beloved series thanks to its quirky animation and out there situations (which sometimes involved old Japanese principals fighting deers). The series is currently licensed by Funimation.