How would you rate episode 12 of
ODDTAXI ? 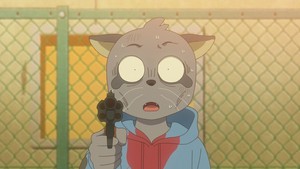 Buckle up, because this week’s episode of Odd Taxi contains some of the tensest television I’ve watched all season. With almost all of its ducks (and duck charms) in a row, the story enters its endgame with a bang in both the literal and figurative senses, dishing out thrills, twists, and jokes aplenty. Dobu’s manipulations, Yano’s machinations, Tanaka’s quest for revenge, Little Daimon’s pursuit of justice—all of these subplots finally reach their apex and combine explosively. It’s almost easy to take an episode this good for granted, given how consistently meticulous the anime’s writing has been all season, but I dare not do so. This installment is just more proof that Odd Taxi‘s hardboiled noir craft is on par with the giants of the genre. However, Odd Taxi also has something they don’t have: talking cartoon animals.

Okay, besides Who Framed Roger Rabbit?. That one counts. I still think Odd Taxi is exceptional.

It’s tempting to jump right into the juicier confrontations when writing up this episode, but first I want us to appreciate how funny this show can be, even as the danger crescendos deafeningly. The Homosapiens, for example, have some life in them yet. Shibagaki goes off-script in a move that’s both wry and cathartic, and I can’t wait to see the denouement of their ruined routine. The stakes here might not be as high as 10 billion yen, but I do want to see their friendship survive. It’s also great to see Odokawa lash Dobu with some of his patented bone-dry quips, further lightening the mood of a really heavy situation. However, the best gag, without a doubt, is Yano getting so mad he forgets to rhyme. In fact, it’s not even Yano’s slip-up so much as it’s Sekiguchi’s dumbstruck and horrified reaction to it. He’s more upset about the disturbance of his boss’ flow than he is at the dummy suitcases. I love that.

Despite Odokawa’s best efforts, Dobu’s convoluted robbery scheme proceeds without a hitch thanks to Yamamoto’s idol indisposition. This doesn’t stop it from being a tense scene, though, because it still involves a lot of money and a lot of dangerous people. I also really appreciate the almost amoral construction of these events—I’m not exactly rooting for Dobu and the elder Daimon, but I also can’t deny the satisfaction of seeing them tie Yano’s proverbial shoelaces. I don’t even know if I’m necessarily rooting for Odokawa in these circumstances. The only truly innocent person here is Imai, who grounds us with his perpetual state of panic. Odokawa is just making the best of a bad situation, but he’s still “using” Imai, in a sense, to strike back at Dobu, and it’s only by good fortune that our resident wota is (so far) unscathed.

Ironically, it’s after the robbery that Odd Taxi‘s myriad pots really start to boil. Odokawa’s perspicacity and good fortune conspire to yank Tanaka back into the fold right as he pulls up with Dobu and the cash, and I think I let slip an audible “oh shit” while I was watching. The volatility of this meeting is self-evident for anybody who’s been following along, but perceptive viewers are rewarded handsomely here. If you’ve been paying close enough attention, it’s possible to predict how this scene will ensue before Dobu even steps out of the car. I hadn’t forgotten, for example, that the Donraku eraser was still sitting in Odokawa’s shirt pocket, poised to fall out on the most deliciously dramatic cue. Dobu’s confident bullet count also reminded me that we never actually saw who shot him at the harbor, and it seems certain now that Little Daimon was the true assailant. And I can’t take any credit for figuring this one out ahead of time, but I did see theories floating around that Dobu was the notorious ditch-11. Sure enough, it adds up. For extra credit, guess what Dobu’s name translates to. While I don’t think a good narrative necessarily has to reward careful speculation, when it’s done this well, I have to applaud both the writers and the viewers who nailed it.

That said, Odd Taxi‘s vicegrip-tight writing would be wasted if it were exclusively in the service of narrative puzzle boxes. This is, thankfully, not the case. Tanaka’s scene is knuckle-whitening not merely because it’s the logical endpoint of several different plot threads, but because it’s an appropriately nihilistic follow-through of his prior character development. The hollowness that haunted his life, from his eraser-collecting days to his gacha doldrums, now haunts his vengeance. A life spent obsessing over meaningless baubles has drained him of his passion and left only noise. The discordant soundtrack, groaning like a broken machine, perfectly syncs with his mental state

Dobu, unwittingly, delivers the finishing blow to Tanaka’s psyche. Because Dobu doesn’t care. He doesn’t even remember playing Zooden, let alone scamming a sucker out of his eraser money. Tanaka has spent his entire adult life obsessing over a faceless villain whom he believes ruined his life and spit in his face; for Dobu, it was a Tuesday. He’s scammed hundreds if not thousands of people since then. Tanaka isn’t special. He’s not some hero destined to slay the dragon and finally find his place in the world. He’s just a harrowed guy with a gun, and Dobu is just an incorrigible gangster at the other end of the barrel. So he pulls the trigger. And all Tanaka gets out of it is a rude reawakening to reality.

Dobu definitely had that coming, though. Hard to be too upset about the baboon getting his just deserts.

Odokawa, meanwhile, made one hell of a gamble dragging his crazed gunslinging stalker into the mix. There’s no way he could’ve known what would happen, but his intuition doesn’t lead him astray. It’s honestly a little frightening how coolly he’s able to gloat over the bleeding and desperate Dobu, although I’m sure a lot of that is feigned bravado. He quickly reverts to panic-mode as soon as Yano pops his spiny head up, after all. Still, he’s ever the compelling protagonist, and I expect the finale to focus on answering the many lingering questions we still have about him. Goriki is frustratingly MIA this week, but the Daimon bros drop a pretty big clue: that duck charm we’ve seen dangling from his rearview mirror this entire time is a mafia memento, cementing Odokawa’s connection to Dobu’s boss by way of his mysterious orphanage patronage. This is confirmation more so than a revelation, however, so there’s plenty for the finale to cover yet. And beyond any implications for our protagonist, I really like that this scene adds a lot of pathos to both Daimon brothers and their strained relationship. The narrative is as busy as it’s ever been, and there’s not a whole lot of runtime left, but Odd Taxi still takes a beat to further enrich its huge cast of characters. That’s why I love this show.

Truth be told, I’m recording a This Week in Anime column on Odd Taxi tonight (finally!), so I’ll save any finale speculation for then. Barring an unforeseen disaster of a conclusion, though, Odd Taxi stands out as one of the most confidently idiosyncratic anime in many years. I’ll be recommending it to as many people as possible, and so should you.