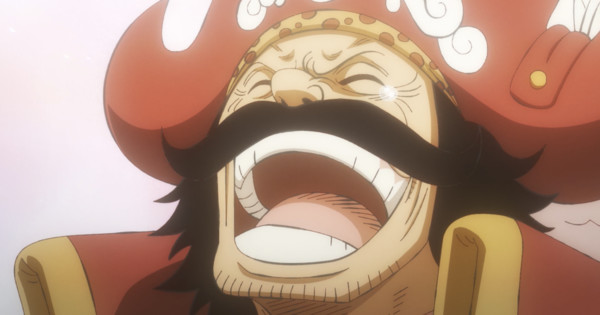 Roger and crew finally arrive at the land of Wano. Sadly, Toki collapses from illness; the length of their journey has begun to take its toll. Everyone onboard advises Oden that Toki should stay at Wano rather than continue travelling. Oden wants to stay behind, but Toki tells him to push on with his journey. When they arrive at Wano’s shores, the Akazaya Nine greet them and find that Oden is married and with children. Toki and the children stay behind under the Akazaya Nine’s care while Oden returns to sea with a copy of Wano’s poneglyph.

With Oden back on Roger’s crew, they set out once again. They visit Zou and find the last Road Poneglyph. They are closing in on the last pieces of the puzzle, but in the background Roger’s health continues to worsen. He manages to keep going, but then Buggy falls ill and will not make it to the last island, prompting Shanks to get off the ship with him to ensure that he can recover. Finally, after years of searching, Roger and crew arrive at the island with the One Piece…and break into roaring laughter upon seeing it. Thus, Roger decides to name the island Laugh Tale and the episode draws to a close.

So much happens in this episode, but it’s hard to talk about anything other than this: Roger found the One Piece, and Roger laughed.

The image of Gol D Roger finding the One Piece and breaking out into laughter is the perfect encapsulation of this series as a whole. Not only is it a brilliant bit of writing in-universe, it works even better as a metatextual statement. For many of its fans, One Piece has always been propelled by a joyful energy—In this land of walking elephant islands and talking cat ninjas, of rubber-armed pirate youths and sword-wielding giraffe assassins, you can’t help but laugh. Eiichiro Oda‘s work has brought happiness to many people around the world for over twenty years, and I think it’s wonderful that we get to witness this event where the man who began the series with his promise of a quest during his brutal execution gets this moment of pure levity and victory.

The anime does this moment immense justice. From the soft music and shojo-esque clouds of sparkling soft lighting to the shared laughter of the entire crew, every aspect of this episode is handled with a loving care that solidifies this as a terrific animated adaption of a terrific manga. What a gift this series has been to us all. What a welcome uplifting moment before the dark events that are to come…

Grant is the cohost on the Blade Licking Thieves podcast and Super Senpai Podcast.