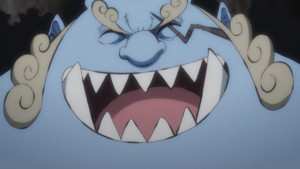 The Straw Hats attempt to save Momonosuke. Sanji uses his air jumping to ascend and chase after Kanjuro, while Usopp launches one of his special stars. Sanji and Kanjuro duel, but Kanjuro unleashes an ink cloud that blots out the sky and sends ink arrows down on the fleet. Everyone is forced to take cover or fight back against the falling ink arrows and this allows Kanjuro to escape with Momonosuke. Momonosuke pushes through his fear to call out to those below and tell them not to worry about him, and instead push on to bring down Kaido.

The assembled fleet continues towards Onigashima. As they approach they are fired on by another ship with long range cannons. Ships begin sinking but the fleet keeps going in spite of the losses. But from beneath the waves comes new help – Jinbei. Using his Fish-Man Karate, he destroys the long range ship in a single strike. Emerging from the smoke of the destroyed vessel, he declares that he will share a cup of sake with Luffy and join the Straw Hats as their helmsman as the episode ends.

It’s hard to talk about how much and how little happens in this episode. On the one hand, it’s rather brief in terms of literal events. Kanjuro tries to escape, the Straw Hats try to stop him, Momo says don’t worry, they head to Onigashima, a ship shoots at them, Jinbei sinks the ship. Between the flashback Momo takes us on, the extended cuts of samurai slashing at ink arrows, and the long sequence of ships sinking, there really is not all that much going on here. In one sense, you could say it was feeling somewhat stretched thin for content.

On the other hand – OH MY GOD JINBEI HAS JOINED THE STRAW HATS! A new crewmember is always cause for excitement and celebration. We have not had an official new member of the crew since Brook joined, which was pre-timeskip for goodness sakes. It’s a literal once a decade kind of event.

What a day! And what a deserving character. While Vivi, Law, Carrot, and others have enjoyed unofficial status of sorts, Jinbei being brought onto the team is a great moment and represents just how far Luffy and co have come. At this point they can now count among their number yet another incredibly powerful fighter, and one who was a former Warlord at that. It shows how big of a challenge they have ahead of them too – even with this boost in strength, the battle against Kaido and Big Mom will be formidable no matter what.