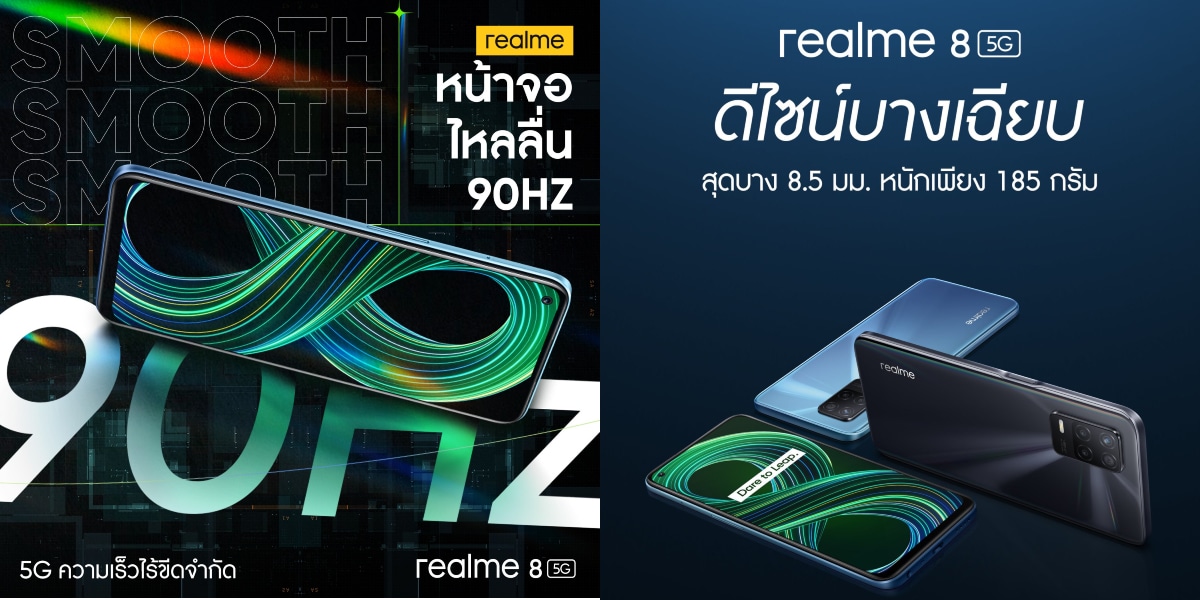 Realme 8 5G is all set to launch in Thailand on April 21 and teasers have started pouring in. The latest teasers reveal some key details about the phone, including that the Realme 8 5G will be just 8.5mm thin. The phone is also being teased in India on Flipkart, but a launch date for the Indian market has not been announced yet. It is largely anticipated to launch in India on April 22. The phone is teased to come in Supersonic Black and Supersonic Blue colour options.

Realme Thailand took to its social media channels to reveal more teasers of the Realme 8 5G ahead of its April 21 launch. The first teaser gives out details about the display, and it is teased to feature a 6.5-inch hole-punch display with the cutout placed on the top left corner of the screen. The phone will have a 90Hz refresh rate and a 180Hz touch sampling rate. The teaser reveals a slight chin at the bottom of the handset and the SIM tray can be seen located on the left spine.

Another teaser revealed Realme 8 5G will be 8.5mm thin and will weigh just 185 grams. The phone is seen to sport a side-mounted fingerprint sensor on the right edge and a 3.5mm audio port at the bottom edge. Another teaser also confirms that the phone will pack a 5,000mAh battery.

Past teasers have confirmed that Realme 5G will be powered by the MediaTek Dimensity 700 5G SoC. It will arrive in Supersonic Black and Supersonic Blue colour options. The launch event in Thailand will begin at 6pm local time (4:30pm IST) on April 21 and will be streamed live on social channels.

A recent Google Play Console listing suggested that Realme 8 5G may run on Android 11, feature a full-HD+ (1,080×2,400 pixels) display, and pack 8GB RAM. It was also spotted on Geekbench with 8GB RAM and Android 11, along with Dimensity 700 SoC. The phone is being teased in India on Flipkart confirming its arrival in the market, but an exact launch date hasn’t been announced yet. It is largely anticipated to launch in India on April 22, a day after the Thailand launch.