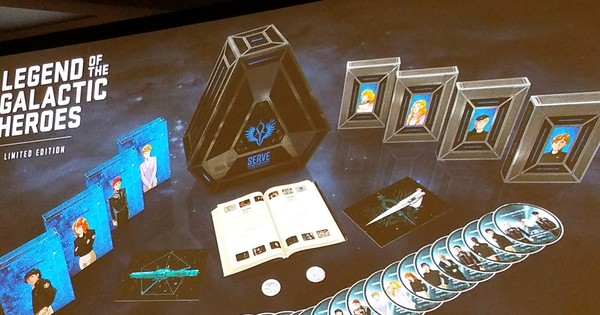 Release was limited to 1,000 copies

Sentai Filmworks has sold out of its limited-edition premium box sets of the original anime adaptation of Yoshiki Tanaka‘s epic science fiction novels The Legend of the Galactic Heroes. The company had stated on Twitter on Saturday that there were only 15 sets left of the product. The product page now shows that the set is out of print.

The company released the series in August 2018 in a limited-edition box set that included every original video anime episode, all three anime films, collectible metal coins, a 200-page art book, and two 3D art cards. The release was limited to 1,000 copies and retailed for US$799.

Sentai Filmworks announced in 2015 that it had licensed The Legend of the Galactic Heroes, but it did not release the series in any form until 2017 when it began streaming the anime on HIDIVE. The company announced in February 2018 that the series would receive a release that year. The company describes the release:

For over one hundred and fifty years, the Galactic Empire and the Free Planets Alliance have been at war. Despite millions of lives expended and planets laid to waste, neither side has scored a final, decisive victory. However, in the vastness of space, the power of a fighting force is only as effective as the mind behind it. In the Empire, that mind belongs to rising star Reinhard von Lohengramm, a young, upstart, strategic genius with his own agenda. Standing against him, is the Alliance’s own rising wunderkind, Yang Wen-li, a historian whose tactical brilliance catapults him into the Alliance vanguard. As a game of chess is played across the universe with millions of living pieces, fleets will burn and entire armies will fall in one the most acclaimed masterpieces in the history of anime, LEGEND OF THE GALACTIC HEROES!

The late director Noboru Ishiguro (Macross, Orguss, Megazone 23) and his Artland anime studio spent more than a decade adapting the novels into a theatrical and video anime franchise, with over 100 installments, from 1988 to 2000.

Thanks to Daniel Zelter for the news tip.