Squaren Enix announced a new Deep Insanity media project that has an ongoing manga, a game, and a television anime called Deep Insanity: The Lost Child that will premiere this October.

The project is set in a world overrun with the mysterious “Randolph syndrome” that causes sudden comas. Simultaneously, a massic underground realm called “Asylym” was discovered at the South Pole as the syndrome’s origin. Weird creatures, unlike any on the surface, dwell there with previously unknown natural resources. To cure the Randolph syndrome (and to get rich plundering the creatures’ genetic data and underground resources), people set foot in the Asylum. 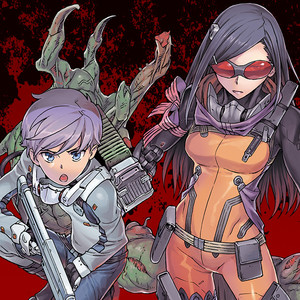 The manga centers on Sergiu Sol, a boy with a special resistance to the disease, and Antarctica’s jack-of-all-trades Hildegard Olympiada Yamada, who decide to take on the challenge of heading to the Asylum, when all others before them have never returned.

The Deep Insanity: The Lost Child anime’s story is set between the manga’s and game’s stories. Hiro Shimono plays the protagonist Daniel Kai Shigure who heads to the very edge of Asylum with a certain wish.

Shin Oonuma (ef: a tale of memories, Dusk maiden of Amnesia, Kokoro Connect) is directing the Deep Insanity: The Lost Child anime at SILVER LINK. Kento Shimoyama (AntiMagic Academy “The 35th Test Platoon”, We Rent Tsukumogami, Our Last Crusade or the Rise of a New World) is in charge of series composition. Kazuyuki Yamayoshi (Chaos;Child, Circlet Princess, The Misfit of Demon King Academy) is designing the characters. Mirai Kodai Gakudan (Grimms Notes) is composing the music.

Fumiyuki Go is directing the sound, and Square Enix is presenting the anime in collaboration with Kadokawa.

The Deep Insanity: Asylum game is set in a world where an estimated 540 million people globally have succumbed into a comatose state due to the Randolph syndrome. The game centers on Woo Inominetas (played by Yuichiro Umehara), the sole survivor of a massacre that took place in a medical recovery facility. Hololive virtual YouTubers Amane Kanata and Tokoyama Towa are performing the game’s theme song “Madoromi” (Slumber). The game will debut for iOS and Android smartphones, and on PC via Steam, with a demo launching on Android on July 2.