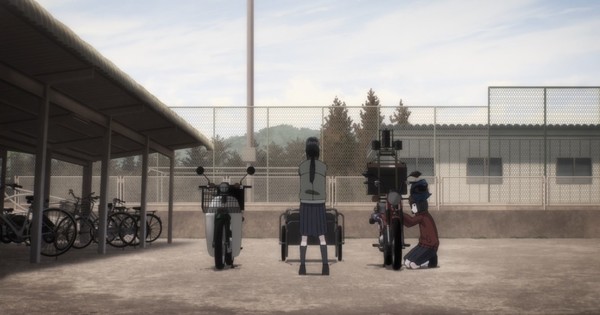 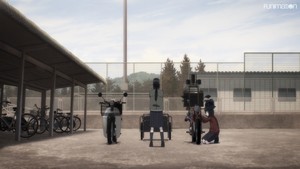 Now that the school excursion from episode 6 is said and done, Koguma’s back to her day-to-day on the back of her Super Cub. This opening is accompanied by Erik Satie‘s “Gymnopédie, No. 1”, a delightfully peaceful tune that fills the liminal space as Koguma meanders her way to school and chats with Reiko at the student bike racks. Like so many instances before, the serene piano music fills the space and accentuates the beautiful mundanity of Koguma’s daily routine.

Post-OP, we’re in Koguma and Reiko’s classroom with a mysterious student (who has popped up in the background numerous times). This new girl – and the third in the cub-riding trio – is Eniwa Shii, a cheerful, somewhat serious, yet totally adorable student council member whose parents own a bakery Reiko frequents.

The main plot of episode 7 is the school cultural festival. Koguma’s class is running an Italian-style café, which will serve espresso and the like for the event. It’s kind of fitting, as this episode also welcomes the looming autumn, which is beautifully depicted in quiet scenes of swaying Rainbow plants (that’s Byblis Filifolia, and me flexing a bit of my ikebana knowledge, thank you) and wayward ginkgo leaves strewn on the street.

Shii comes back with the cultural festival preparation committee to ask for help in decorating the room. Koguma and Reiko already have some business to attend to – namely, getting some new gloves for Reiko and getting ready for winter – so they don’t stay. What ensues is a lovely vignette of the girls at the local home goods store: think Lowe’s meets a bit of Dick’s Sporting Goods, with a touch of that one section in WalMart. They get some gear and ride back to Reiko’s cabin against the cloudy sunset.

The next day, the “new character” plot kicks in when Koguma and Reiko overhear a group of students arguing over the fact that they can’t borrow their teacher’s car to transport some items. Through a bit of teenage confusion, it seems like no one actually asked their teacher to help: they all assumed someone else did. And of course, no one’s parents can help, leaving them to ask if someone can just cart it on a bike. This, in particular, catches Koguma’s attention, prompting her to ask Reiko if she can help out with that rig. It turns out that the students need to move a pretty hefty list of items: ten tablecloths, five trays, some tableware, twenty coffee cups, a showcase (cabinet), and of course, the aforementioned espresso machine. Even on the back of a Super Cub, that kind of seems like a lot.

But Koguma has full confidence in their Cubs, and hauls a pull cart trailer to attach to her bike. Also, that rig? It’s a delivery cart with vibration dampeners, which Reiko says is perfect for keeping soba noodle from spilling and donburi bowls from shattering. And she’s true, as that same delivery cart on the back of her bike is a frequent sight in IRL Japan.

After the girls have souped up their bikes, Shii comes out to see them ahead of their departure. Koguma and Reiko suggest to her that if things don’t pan out well, the class can put on an American-style saloon instead. Reiko even mentions that there’s a Winchester rifle, cowboy duds, a Republic of Texas flag (that one made me snort) and a plethora of other goodies that’ll make it feel authentic, including pork n beans at the local supermarket. But of course, we already know that Reiko and Koguma will succeed, but despite the lack of tension, I personally think that part of the joy of Super Cub is seeing the girls being capable and skilled.

Episode 7 is, like so many of Super Cub‘s episodes have been, an absolute delight. It’s so lovely seeing Koguma and Reiko team up to help out their classmates with their cubs, which is another positive step in Koguma reaching out and further broadening her world. Though her interactions with her classmates are rather straightforward and simple, they’re nevertheless heartening to see. This isn’t the same Koguma as in the premiere: The Koguma in this episode, and in the back half of Super Cub in general, is a much more brazen girl. Koguma is still quiet, and her perspective continues to reflect that through the sound design, but it’s exciting to watch her genuinely contribute to the Italian-style cafe and its success. Additionally, Shii is a very interesting character. She’s kind of the happy medium between quiet Koguma and brazen Reiko. The small peek we get into her personality and school life is enough to be engaging, and makes me eager to see her in episode 8.

There are so many little things in this episode that remind me why I love writing about Super Cub: details like Reiko’s torn gloves, Koguma’s shivers at the coming autumn, a golden ginkgo leaf signaling the latter months of the year; the subtle thrill of hosting the school festival in the second semester, the girls drinking espresso while leaning on their cubs. As always, it’s a beautifully sculpted twenty-four minute experience that almost always brings me to tears at some point during my watch. Thankfully, they’re always happy tears, especially for best bike girl Koguma.

I continue to stand by my claim in my premiere review of this series: Super Cub is the dark horse of the Spring 2021 season. In fact, even though we’ve still got weeks of episodes left, I’m almost ready to cement it in my Top 5 list for 2021, right alongside Idoly Pride. And while Super Cub definitely is not going to appeal to every viewer, it does have this rare sense of wonder that comes with a truly special slice of life story made by the right studio at the right time and place. The expertly executed sound design carries Koguma’s coming of age narrative well, which is further enriched by a variety of incredibly likable side characters who make the mundane magical. And isn’t it just lovely to see three young women enjoy being teenagers without a care in the world outside of one another and living their best life? I certainly think so. 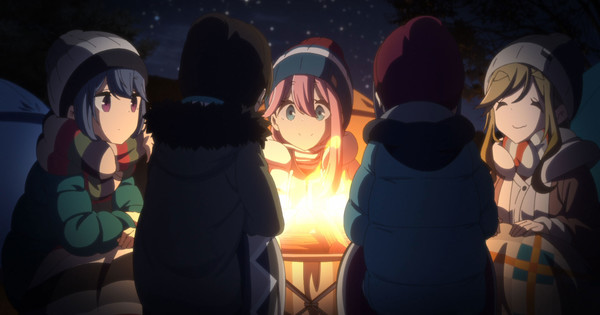 [ad_1] 3rd BD of anime’s 2nd season to include OVA The official website of the Laid-Back Camp anime revealed on Friday that the third and final Blu-ray Disc of Yurucamp Season 2, the second television anime season based on Afro‘s Yurucamp (Yurukyan△, Laid-Back Camp Δ) manga, will include a new OVA when it ships on… 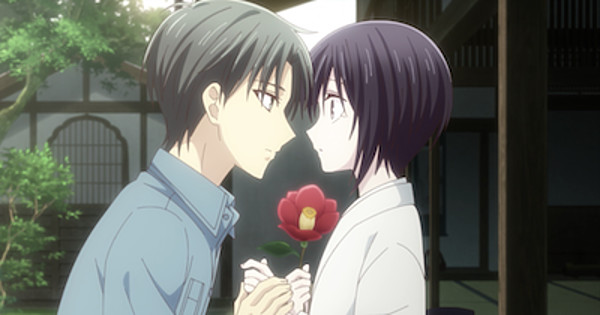 [ad_1] The new, limited edition Fruits Basket bubble teas have come out, which is surely the most dramatic, noteworthy Fruits Basket the Final thing to occur this week—Oh no. Really Shigure? Really?! I was going to start this review with my tasting notes on the three beverages, but that can wait until the end. First,… 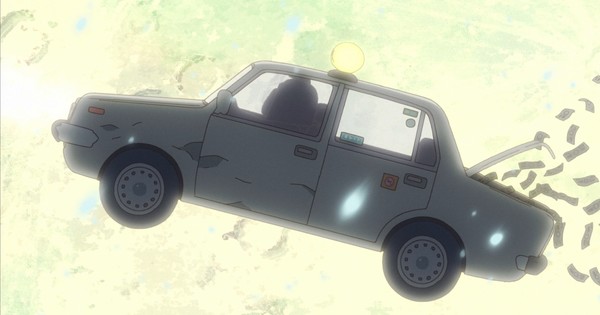 [ad_1] How would you rate episode 13 ofODDTAXI ? After 13 weeks of compounding convolution and mounting danger, ODDTAXI literally soars through its finale, sticking the landing with all the stalwart and slightly askew swagger that has come to define the series. It’s satisfying in big and small ways. Big, because it takes its large… 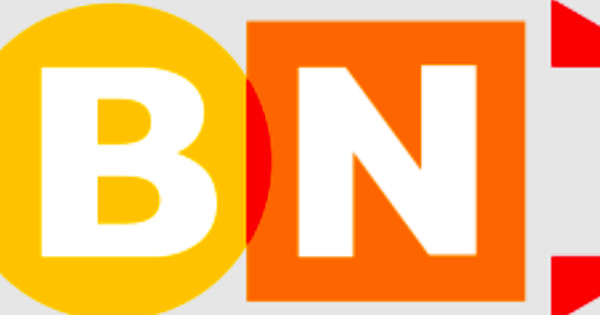 [ad_1] Companies to release “new services” for viewers to “enjoy new immersive animations, virtual social interactions” in next few months HTC announced on Tuesday that it will partner with Bandai Namco Pictures to create virtual reality anime content for HTC‘s VR applications store Viveport. The partnership will initially focus on the integration of animated content… 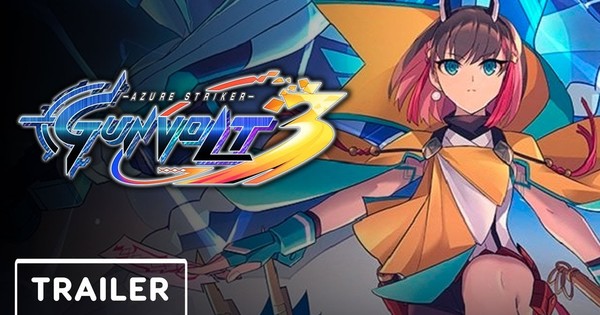