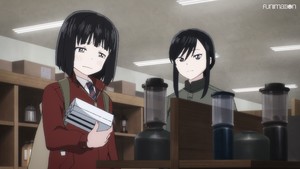 Episode 8, “Shii’s Place,” circles back around to Shii Eniwa, whom viewers met last episode during the lead-up to the school cultural festival. It’s been a few days since the festival, and the once cheerful atmosphere has begun to mimic the bitter chill of Autumn, and the coming Japanese Winter. Both Koguma and Reiko know that it’s time to ready their cubs for the cooler -and colder- season. For them, that means being a heck of a lot more thrifty, even if they might want to spend a little here and there.

But we’re not there yet: we’re at lunch at the bike racks, which quickly are becoming too cold for the girls to eat at on a daily basis. Still, they’re here, bento in hand, and it’s here that, while sitting outside for lunch, the girls are approached by Shii, who tells them that her family’s shop just installed an espresso machine for their cafe section. Due to their efforts in episode 7, she wants to treat them to a cup, as does her father. He even -as we’ll later find out- wants to treat them to some of the bakery’s bread. Naturally, the girls accept, and even suggest stopping by that very same day. Thus, we have our hook for episode 8’s title and for this episode.

Post-OP -which honestly, I do watch every single time because it’s so delightfully mellow- Koguma and Reiko are off to Shii’s family cafe, charmingly named Beurre, a french word meaning “butter”, and very apt for a cafe and bakery. Shii follows in tow on an Alex Moulton bike, a British bike that packs loads of style. Because of her bike’s speed, Reiko offers to pull Shii. Smartly, Koguma reminds Reiko that that’s high-key dangerous, and that Shii -and potentially Reiko- would likely end up in a ditch.

Thankfully, the girls arrive at Beurre without incident, and are escorted in to a bakery straight out of my time living in Japan. It’s warm and cozy and is split between a chateau-esque design and an American-style diner. In many ways, it doesn’t make sense, design-wise, yet after meeting Shii last episode, it makes sense. There’s not much time to think about the design though, as Shii’s father appears and thanks Koguma for her help, and even offers them some American coffee, which Koguma readily accepts alongside Shii’s own off of espresso. After a few cups of coffee and some rather delicious bread, the girls depart, leaving Shii to her cafe and family. Shii eagerly asks them to return, and you get the sense that we’ll be seeing the cafe a few more times over these final few episodes.

After school the next day, the girls head off to the local second hand shop with thriftiness in mind. While they’re definitely trying to save money, they still need to ensure their safety in the upcoming season. As soon as Koguma starts to look around, she realizes that Reiko has disappeared. To where? To look at the model air gun case. Thankfully, practical minded Koguma is there to reign Reiko in and remind her of their task: to outfit themselves for Winter. Yet Koguma isn’t all work: in fact, she leaves the store with a small, white Trangia mess tin, and declares that that’s exactly what she came to the store for when Reiko teases her. Once more, it’s a touching reminder that these girls are definitely friends. In fact, I’d say that by this point in the show, they’re good friends: a marked change from a few episodes ago where they were just friends tethered by a similar hobby.

Episode 8 is soundly the food episode, in my book, even if food isn’t the sum total of the episode. It’s even better than episode 4’s okonomiyaki, which lives rent free in my mind. Food fills this episode like buns in a basket, warming up the soft, quiet moments shared between Koguma, Reiko, and even Shii as the series brings in a new character to fill out the main cast. Speaking of Shii, she gets amazingly dynamic character growth in this episode. She’s no longer just the kind, serious member of the student council. She’s a fully fleshed out character with her own life, her own mannerisms, and ultimately, a life outside of school, just like Koguma and Reiko. I really hope that Shii will one day get her own cub: I want this gang of two to grow to three, especially since Shii is the happy medium between quiet Koguma and the more brash Reiko.

As always, there’s lots of beautiful liminal moments to be found: the sound of Shi’s bicycle click-click-clicking ahead of Koguma and Reiko’s puttering cubs. The cheerful, major key piano (a refrain of the opening in a different key) playing as Shii makes a cup of espresso. These moments truly set Super Cub apart as being one of the best slice of life series in a long time. It joins the ranks of Laid-Back Camp in my mind, offering up maximum coziness this episode, and heavily hinting at even more cozy vibes as the series winds down to its end in a few weeks. I readily embrace all of the softness this show tucks in around the lonesome, often difficult reality for teenage girls in the same way I embrace waking up to yet another Super Cub Wednesday.

In the time of global upheaval, daily distress, and on-going strife as the pandemic rages, it’s nice to know that a show like Super Cub is here to provide immense comfort and ways to quietly move through loneliness.