“The contract was signed at a time when nobody could have imagined the threat of coronavirus.” 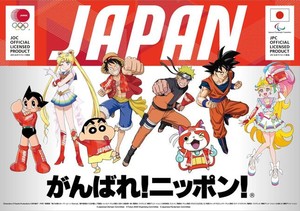 As public opposition to the Tokyo Olympics continues, however, the Committee has faced backlash for the tweets. Detractors argued that it feels out-of-character for characters with a strong sense of justice like Atom and Usagi to support the Games during a pandemic.

In response to the backlash, Tezuka Productions head Rumiko Tezuka (daughter of Osamu Tezuka) tweeted: “The contract for the character cheering squad was signed after the Tokyo Olympics and Paralympics were decided, at a time when nobody could have imagined the threat of coronavirus. At the time, everyone was looking forward to the Games. Right now, the situation has made it so that there are divided opinions regarding whether to continue holding them, but from a business perspective, Atom is participating in the cheering squad as part of the role he was given.”

She continued: “All of the characters who have been contracted to participate in the cheering squad are in the same position, not just Atom. They will do the job they have been given: Cheer for the competing athletes. Please don’t involve them in your debates about whether the Games should go ahead.”

In later tweets, she expressed her dismay that the controversy has prompted a bigger uproar than when the characters were originally announced. She said that she will take the opinions she has heard into consideration when negotiating future licensing deals. She also tweeted that she regrets using the word “business” in her original tweet instead of providing a more detailed explanation, and stressed that there are certain things that she can’t say publicly.

“But still, to think that there are so many people in society who have such strong feelings about Atom,” she remarked. “As painful as it is, I am grateful.”