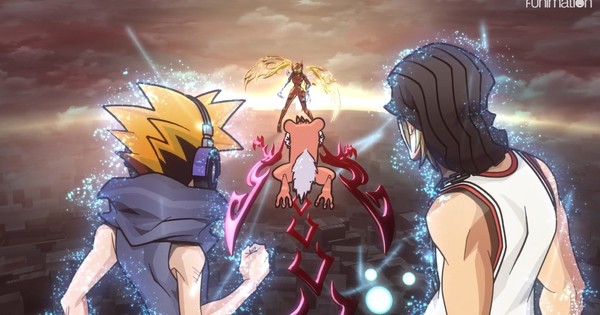 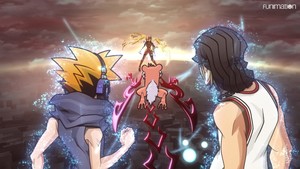 Episode 11, “the Hour of Reckoning,” opens with a sequence that’s as foreboding as its title. Right away, the music is tense as Neku and Beat walk the Shibuya River, steadily making their way towards the Composer, who both assume is Mr. Hanekoma. It’s a race against time as Messy Hot Boy Sho is trying to find the Composer as well, setting up a high-stakes game within the larger game.

Post-OP, my hot boyfriend has beaten Neku and Beat to the punch, though he hasn’t broken through the barrier ahead. Our intrepid twosome ain’t got time for everyone’s favorite number cruncher, but strangely, Sho isn’t even hungry for a fight. Instead, he’s there more as a warning to the boys, not of what hides behind the barrier, but of Miss Konishi…who turns out to be hiding in their shadow.

With a clickety-clack, Miss Konishi emerges, and Sho immediately launches into action, promising to reduce her down to sludge in the Shibuya River. So Konishi makes a bet to save her own skin. If Sho becomes the Composer, she wants that sweet, sweet nepotism: namely a position. It’s a smart move from a shrewd woman who hasn’t shown a lick of kindness, but hey, it removes the barrier, allowing Neku and Beat to pass through with Sho elated over becoming the newest Composer.

Miss Konishi, however, is not yet done toying with the boys. She transforms in a flashy sequence, raising the boys up high above the Shibuya cityscape as she emerges in the form of a fierce tigress, Noise claws at the ready. Nothing seems to work against her, and no matter how hard Neku and Beat try to Psyche their way through the fight, it feels futile. Rightfully so, given Miss Konishi is the proverbial Dragon standing in their way between themselves and the Composer. Yet Beat and Neku can’t give up: they’re here to bring Rhyme back, and Beat is determined to become the next Composer in these wicked, wicked games.

It’s this determination that leads Beat to ultimately utterly wreck the tigress where she stands, freeing Rhyme and returning her back to his side. It’s also what gives Neku enough energy to stand with his partner and withstand one final volley of attacks on this week’s Game Master. They eventually realize Miss Konishi’s weakness, which Rhyme helpfully shreds into tatters, finishing off Miss Konishi’s Noise Form and returning Neku and Beat to that monochromatic room.

But Miss Konishi’s not done yet. She drops some anvils, and like this world’s version of Junko Enoshima, rains down despair on his head. Thankfully, the episode doesn’t leave on a tragically sad note. In fact, all of this happens in the front half of the episode, which leaves a lot of space for some really beautiful sound design paired with some light-hearted, tender moments.

Episode 11 slaps. It’s the perfect second-to-last episode before next week’s finale. This is what I dreamed of the show being: plotty, impactful, emotional, and engaging. Even though it had to compress a sizable JRPG into twelve-episodes, TWEWY the Animation is easily one of my favorite adaptations in a long time, doubly so since I already adore the video game (though the Tales of Symphonia anime will forever hold a special place in my heart).

As a long-time fan of TWEWY, it’s hard to let this animated adaptation go. It’s strange because way back in the premier, I honestly didn’t imagine I’d feel this way. I figured I’d have kind of middling feelings towards the series, in large part due to its compressed, weak opening arc. But after episode 5, I finally felt properly attached to this series, enough that I’ve started replaying TWEWY on my DS and Switch, because I love to double dip on my replays. I feel properly amped up to return to Shibuya in NEO TWEWY and even more excited to see how this all resolves in this animated adaptation.

Call me properly stoked, Players. I’m ready to see how Neku and everyone else’s stories end, how Shibuya’s story wraps up, and how everything comes together next week. Thank goodness I’ve still got one more week to really dig into this animated adaptation. It’ll be the perfect way to wrap up Spring 2021. 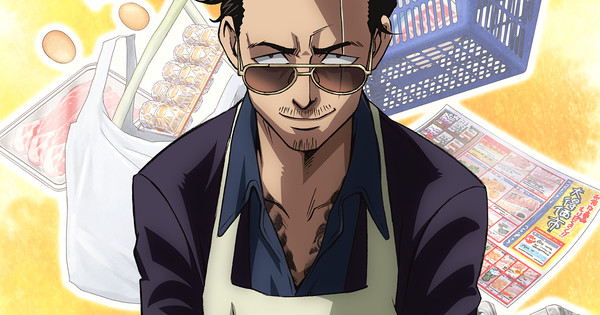 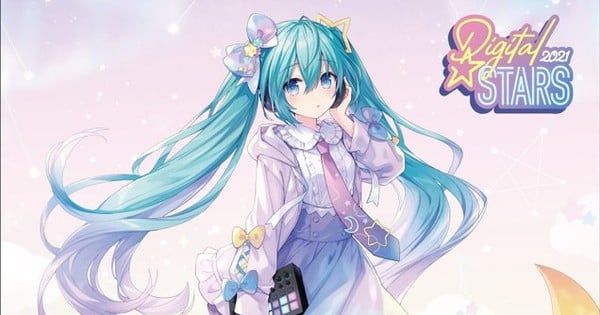 [ad_1] Yesterday, the official Twitter account of Hatsune Miku was suspended over supposedly failing to meet Twitter’s age requirements, which stipulates that all account holders must be at least 13 years of age. Ironically, the suspension was apparently triggered because the account’s English admin, being aware of Twitter’s age restrictions, decided that the time is… 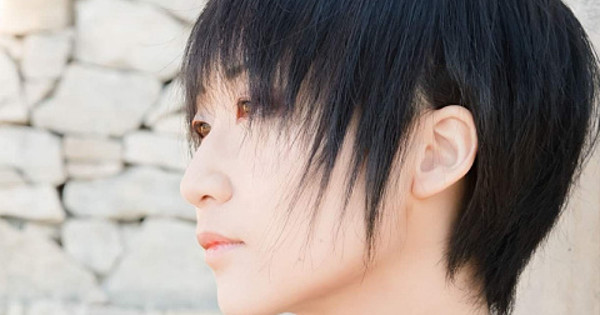 [ad_1] Funimation voiceover actors Emi Lo, Apphia Yu, and Shawn Gann spoke to Indie Wire earlier this week about discrimination against Asian American actors in the film and voiceover industries. The discussion was prompted by the rise in anti-Asian violence and hate speech across the United States in recent months. The actors spoke of their… 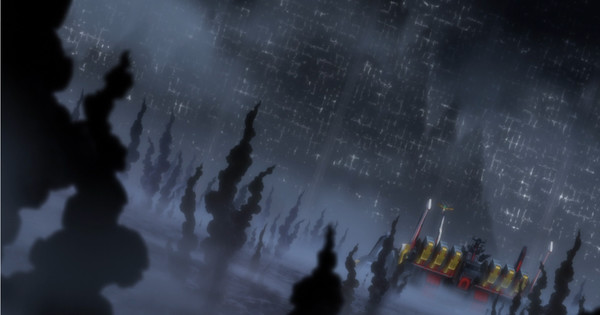 [ad_1] Tae’s dreadnought continues its rampage in Rekka. Zetsu pulls Rekka out of the Granedger United talks and heads back to the capital. Once there, Tae unleashes the full might of the battleship on Zetsu but to no avail. The emperor of Rekka uses his Briheight to dispatch Tae and claim the battleship for himself…. 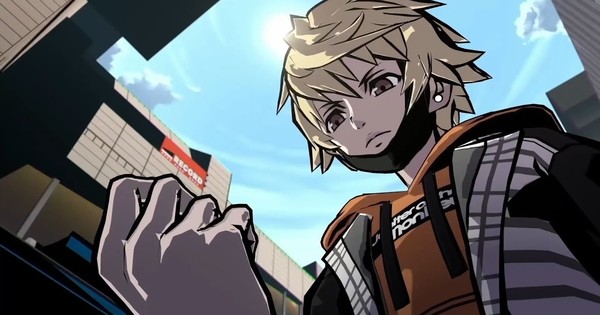 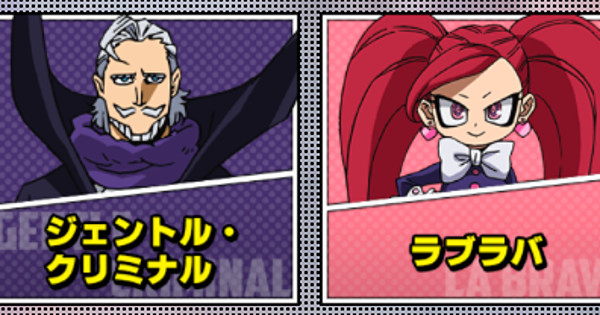 [ad_1] This year’s 25th issue of Shueisha‘s Weekly Shonen Jump magazine revealed on Monday that the characters Gentle Criminal and La Brava will join Bandai Namco Entertainment‘s My Hero One’s Justice 2 video game as the game’s fifth DLC character set. The characters will release “soon” in the game. The game launched for PlayStation 4,…