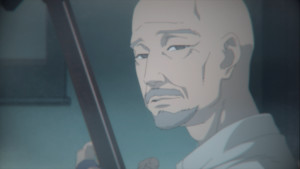 Grief is a fraught subject in fiction. It’s an experience at once universal and deeply personal. Everyone will one day know what it’s like to lose someone they loved, but how we process and cope with it can be so tender and volatile that it’s hard to ever fully share those feelings with anyone. And it’s easy to forget in all the drama, musical numbers, and shonen tournament hijinks that from the very beginning of Setsu’s journey, Those Snow White Notes has been a story about grieving the loss of somebody irreplaceable to him.

That journey has only gotten more and more complicated in its eleventh hour, thanks to the very people who left Setsu to cling to his grandfather’s side and sound his whole life. His dad seemingly skipped town, only to arrive years later to thrust his expectations on him and Souichi with no warning, let alone anything approaching familial comfort when this is presumably the first time they’ve met since Matsugorou died. With everything else going on last episode, it kind of slipped by me just how much baggage Ryuugen brought along with him. The fact that Setsu is at all okay psychologically after all this is a testament to just how rock solid Wakana and Matsugorou were, and considering Wakana isn’t even 20 yet, that’s saying a lot.

Then we get to Umeko. She’s been – at best – a questionable parental figure since she first arrived, but this week she throws away any tattered shred of sympathy she might have garnered. Whether her desire to preserve and proliferate Matsugorou’s talent is borne from pure ladder-climbing, or out of some misguided attempt to memorialize her father, her reasons cease to matter once she stoops to exploiting her kid’s still raw grief to manipulate him. Bad parenting is a staple in anime, but this particular plot point stings all the harder for how insidious it is, framing it as Setsu’s duty to carry on his grandfather’s art, or else he’ll truly be letting the man who meant the most to him die for good. That’s not only a massively toxic burden to place on a teenager still barely coping with death, it’s also a doomed pursuit.

Art is, in the grand scheme of things, ephemeral. For as much as humans can work to record, archive, and preserve the things we create, everything eventually returns to dust with enough time. The fallibility of human memory and the shifting of society and language guarantees that even art that is preserved for centuries will never fully resemble what it did in its original context. That’s a harsh reality to face, especially when the art in question feels essential to who you are the way it does to Setsu. So I can’t fault him for wanting to carry on his grandfather’s sound, if only to keep himself from ever forgetting the kindness and love it granted him when he needed it most. But the lesson that’s been hammered since the beginning of this story, and the one that gave episode 4 such resonance, is that trying to recapture the past is impossible – the way to truly honor what came before is to build from it, until one day you too become the foundation for future creators. Setsu may some day have the skill and echoic memory to perfectly recreate his grandfather’s playstyle, but all that would accomplish is forsaking his own individuality in the name of forgery.

On some level, I suspect Setsu knew that already. But knowing an uncomfortable emotional truth and putting it into practice are two wildly different things, and we see him struggle with that through nearly his entire performance – one where he masterfully recaptures the energy of his grandfather, but seems inescapably unsatisfied with it. But in the final, fleeting notes of his song, he at last lets himself acknowledge the lesson Matsugorou gave him in his last days, and takes the tiniest of Baby Steps towards his own path. It’s a strikingly poetic end to what winds up feeling like a eulogy – a sincere and intense goodbye to the man who raised Setsu, and who gave him the chance to be the person he is and will be. As a standalone performance it perhaps lacks the impact of earlier ones, but for my money this is a suitably complex emotional climax that manages to be both (purposefully) frustrating and cathartic at once. There’s doubtlessly fallout – and Souichi’s performance – left for next week’s finale, but it says something that Those Snow White Notes could have left off at the end of this episode and I’ve have been satisfied. It’s that good.