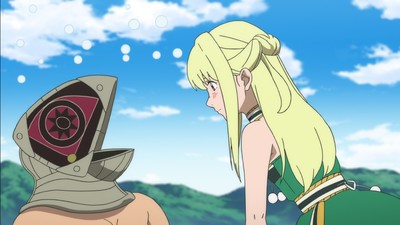 Phew. Okay. Now that I’ve finished my post-To Your Eternity routine of frantically pacing my office and screaming, “My boy! My precious lizard-faced boy!” for roughly ten minutes without interruption, I think I might be ready to tackle this review. I try not to overindulge in visual tricks with reviews for shows that I’m not actively roasting, lest these reviews transform into the GIF-heavy Tumblr roasts from the days of yore. However, every now and then I am forced to reckon with the inherit limitations of this archaic method of communication that we call “writing with words”, and there is only one authentic way for me to express what To Your Eternity made me feel in the thirty seconds before the episode cut to black:

Look: I know Gugu probably isn’t about to die — at least not yet. I don’t think the show would have included that scene where his dirtbag brother shows back up to try and wriggle his way into Gugu’s life again if it didn’t plan on paying it off. Also, for how much it loves to occasionally play with its viewers expectations and pull the rug out from under them, I don’t think To Your Eternity is cruel enough to tear Gugu away from this mortal plane without letting him use the badass anti-Nokker helmet that the Booze Man spent the better part of four years making. If this were a terrible anime, like, say, Yashahime or DARLING in the FRANXX, I might be more worried. But TYE has got this.

That said, let us recap all of the perfectly paced and meticulously tuned instruments of unbearable foreshadowing that To Your Eternity lays out in “Gift from the Past” to really make its sudden but inevitable betrayal sting that much more:

• Gugu’s brother comes back, but our Buff Yam Boy smacks him down with words, and goes on a big spiel about how much he loves his new life and his weird found family.

• Gugu’s brother also returns Rean’s old ring, which he never ended up selling, to his credit. This causes Rean to realize that Gugu was the sweet boy that rescued Meer way back when, which is very convenient timing because…

• It’s almost Rean’s sixteenth birthday, which means she’s about to get married to the guy her folks picked out…unless she happens to snag a boyfriend first. And wouldn’t you know it, during a round of Craft Time and Girl Talk™, Fushi casually lets slip that Gugu, like, “like” likes Rean. This leads to Rean ambushing Gugu on his comfy pile of Napping Yams, and aggressively attempting to get him to give a reprise of that drunken love confession he delivered four years ago. Gugu messes it up, because the only WAP he knows how to handle is a Warm-Ass Potato, and it’s pretty cute.

• Booze Man gifts the aforementioned anti-Nokker helmet to Gugu, and then he monologues to Pioran about how much he loves the kid, and how sad he is that he is going to outlive Gugu, and how much he wants Gugu to grow into a fine young man with a wealth of choices for how to make the most of his long life. In other words, he may as well be hurling full bundles of death flags in Gugu’s general direction.

• And finally, after embarrassing himself at Rean’s party by gifting her the one flower that gives her PTSD flashbacks of that one time she got pushed over by a small boy, the two finally open up about Gugu’s head getting flattened by a log that was about to kill Rean. The music swells, and the kids are awash in their love for one another, a romance almost half-a-decade in the making.

So, naturally, that’s when the Nokkers show back up and literally chuck Gugu off of a cliff.

When I break it down like that, it might be easy to accuse To Your Eternity of being a bit heavy handed in its use of dramatic ironies and poetic callbacks, and it totally is. However, as always, To Your Eternity‘s strength lies in its almost perfect sense of pacing and mood, and how efficient it is at laying out its plot developments and character beats in just such a way to achieve maximum emotional impact. In other words, despite its tendency to go real big every time something beautiful and/or heartbreakingly tragic happens, I wouldn’t call TYE a melodrama. In just the handful of episodes concerning Gugu’s arc, the show has told a more compelling story than many series can muster in the whole of their runs, and all with a cast of diverse and interesting characters that all feel deeply real and human.

Yes, that also includes Fushi, the immortal shapeshifting Orb-Thing. One of the best parts about the four-year time skip is that it allows To Your Eternity to make good on its central premise without sacrificing the slow-and-steady approach to character development that has made it such a success. The Beholder reveals at the top of the episode that Fushi has made an active choice to not use any of his shapeshifting or materialization powers in the four years since the Nokker attack, and not just because life has been Nokker-free since then, but also because he simply wants to experience life in the same way his family does.

He isn’t human, obviously, but he is more human-like than ever. Sure, he still doesn’t know that much about marriage, baby-making, or the complex socio-economic hierarchies that create rifts between the wealthy elite and the common laborer, but dammit, he can string together whole sentences now, and he can stitch sweat-rags for Booze Man’s nasty pits, and he can give pep-talks to his romantically challenged brother-from-an-actual-human-mother. The whole appeal of a story like To Your Eternity, at least in my mind, is the unique set of challenges and opportunities that come from telling a story that could potentially span tens of thousands of years as it chronicles the life of a distinctly alien form of life. By making Fushi an active participant in other people’s stories, we’re getting the best of both worlds: We get to watch our Orb-Thing grow up into a bonafide person, and we also get to experience a wealth of joy and sadness through a rotating cast of wonderful characters besides.

All of this is to say that, even though Gugu’s seemingly impending doom will likely wring more than a few ugly sobs out of me, I’m also aware that Gugu’s story has to end sometime, one way or the other. Fushi has so many more lessons to learn before his own tale will be done, though I’m sure Fushi would agree with me that the nicest conclusion would be that he simply gets to move on after Gugu and Rean live a long and happy life together as a family. Life is rarely that clean and that kind, however, and all either Fushi or the audience can do is meet whatever comes next head on, and then do our best to come out stronger on the other side of it.