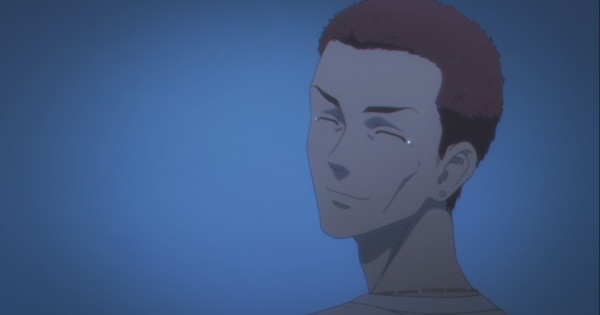 Something that’s been niggling at the back of my head for a while now is just how, if at all, Revengers would go about explaining its time travel conceit. It doesn’t have to – magical realism like this has been around long enough that explaining the why of Takemichi’s temporal leapfrogging isn’t all that important – but if we’re going to be keeping track of two timelines it’s probably worth it for the show to establish at least a few rules just so we’re all on the same page. That’s what takes up most of the first half of this episode, and while we do get answers, they just raise a whole lot of other questions.

After young Naoto accidentally interrupts a moment between Takemichi and his old (young?) flame, our protagonist ends up accidentally jumping back (forward?) to the future, and we get caught up on some of the actual mechanics of this whole thing. For one, Takemichi’s body apparently just goes into a coma when he time leaps, and Naoto just keeps him hooked up to an IV in his apartment. That raises a whole lot of other questions about the logistics of keeping a comatose person there, most of them involving bed pans, and that’s one query I hope this series never bothers to bring up. More importantly, this return reveals that Naoto’s plan for preventing Mikey and Tetta from ever meeting was to just kill him, Future Crime style.

Now, even if we set aside the moral implications of murdering somebody for a crime they haven’t committed but might contribute to a decade later, that’s just a bad plan, Naoto. For one, how’s Takemichi supposed to get a drop on the toughest delinquent in Tokyo? For two, even if he did manage that, what’s the exit strategy? Does Takemichi then get sent to jail to relive his way to an even worse adulthood, provided that he isn’t just killed by Draken or another Tokyo Manji member? That actually brings up another issue: neither Takemichi or Naoto now remember anything from the new timeline caused by altering the past. Takemichi makes sense, but Naoto not remembering suggests just knowing about time travels fixes him in a now nonexistent world line, and there’s a whole truckload of implications to that idea which I’m pretty sure exist entirely outside the scope of this story.

Thankfully the rest of the episode quickly moves on from those terrifying existential questions and instead delivers a heaping helping of depression. Turns out an unattended side-effect of Takemichi’s actions last chapter is that Atsushi avoided jail time, thanks to not stabbing anybody. At first that seems like a blessing, another life turned around thanks to our hero’s intervention. Heck, he’s made it big in the gang and even runs a high-class hostess bar! Akkun’s been living it up since middle school, right? But the moment we see Takemichi’s old friend in the flesh, it’s obvious he’s been living the farthest thing from the high life. The pair’s rooftop reunion starts off sweet, but the entire time they’re catching up there’s a sense of dread to it all, and once Atsushi drops the other shoe, reality punches our protagonist right in the gut.

What Atsushi’s been going through isn’t exactly spelled out, but his final words and act paint the picture perfectly well. The guy who nearly killed to protect his friend was ground down and twisted up until he was willing to shove Takemichi in front of a train, seemingly without a second thought. It’s a bit convenient that he somehow intuits the magical turn that saved Takemichi, but I can forgive that for how powerfully it ties into the theme of regret that’s defined the series. Atsushi is so desperate and cornered that the only path to happiness he can see is the impossible, and clinging to that belief is the only thing he can do before ending his own life. Whatever the Tokyo Manji gang has become under Tetta’s influence, if this is the only escape one can imagine, it must be truly dire. That the guy was apparently watching the whole thing just raises even more morbid questions.

That’s a hell of a coda to end the episode with, and it more than makes up for the clunkier opening half. So now the question is just what Takemichi can do to untangle this increasingly gnarled web of violence and despair. I can handle plenty of plot shortcuts and contradictory time travel rules, just so long as Revengers can stay this compelling.