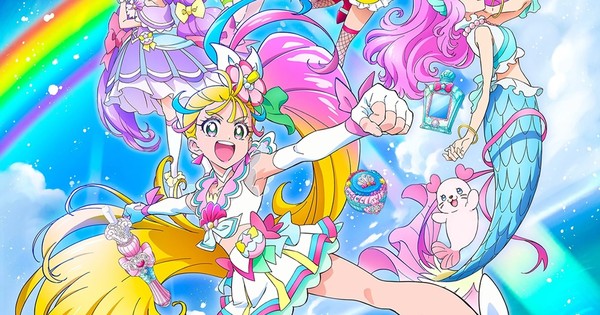 Tropical-Rouge! Pretty Cure marks a major step forward in the presence of the Pretty Cure franchise in the West: it’s the first series to be simulcast in its entirety right from episode one. (Its predecessor, Healin’ Good Pretty Cure, started in the middle, with its early episodes appearing at a later date.) That’s pretty heady stuff for fans of what has become one of the most recognizable magical girl series in the classic mode (meaning for an intended audience of young, stereotypically female, viewers), and in an added bonus, these first twelve episodes get things off to an engaging start. The story thus far mixes action with a moderate supernatural threat and a storyline about accepting yourself for who you are, making for a show that’s both fun and meaningful without leaning into preachy territory.

The action opens with Manatsu Natsuumi, a first-year middle school student moving from the island where she’s been living with her father to the mainland, where she’ll live with her marine biologist mother while attending school. While Manatsu’s excited about, well, virtually everything that exists under the sun (she’s a true force of nature), she’s particularly thrilled that her new mainland school will have clubs for her to join. Although it’s not explicitly stated, there’s an implication that there wasn’t a huge population of people her age on the island, and ultra-extrovert Manatsu thrives in groups. As it turns out, the first person her age she meets is Laura, a queen candidate from the mermaid kingdom of Grand Ocean. Laura has been sent to Aozora City to find the legendary Pretty Cures to help fight off the Witch of Procrastination, who, for reasons not yet really expanded upon, wants to steal humans’ motivation energy. While Manatsu is an initial disappointment on this front, she soon proves herself when Laura is attacked by one of the witch’s minions, allowing her to transform into Cure Summer.

From there she and Laura relatively quickly find the other three Pretty Cures: Sango (Cure Coral), Minori (Cure Papaya), and Asuka (Cure Flamingo). All three girls also attend Manatsu’s middle school, although only Sango is in her class and year; Minori’s a second-year and Asuka’s a third-year. This wider age distribution allows for each girl to bring something different to the table when they manage to start their own club at school, the Tropical Club, in order to better organize themselves and fulfill Manatsu’s craving for an impressive variety of school activities. But they also each come with their own baggage, some of which impacts the group in more negative ways. It forms a good balance of personalities and problems for the girls to deal with, making their regular lives as important as their fight as Pretty Cures.

While this may not sound like an interesting element to add to a magical girl story, it serves to show us how intertwined who the girls are as people is with their work as superheroines. While Manatsu doesn’t have a huge amount of interiority or angst at this point, all three of the other girls and Laura do, and they work through things both as heroines and as regular people. Sango, for example, has a fear of standing out and making her own choices, having been bullied for making the “wrong” choice when she was younger. She’s now afraid to be herself and doesn’t quite believe that she’s good enough to do anything. When she embraces her decision to follow Manatsu into battle, she’s rewarded with a transformation into Cure Coral, whose primary attack is a shield formed when she crosses her fingers into an “x” shape. That shape signifies “no” in Japan, and Coral’s shield can therefore be read as a sound rejection of someone else’s attempt to impose their will upon her or others. It’s Sango’s scream, saying that she’s going to believe in herself and her choices, and that she will protect others’ right to do the same. That coral reefs are also oceanic protectors, sheltering wildlife, makes her Pretty Cure identity even more symbolic in a way that character names aren’t always in this franchise.

Minori has the most drastic transformation when she’s Cure Papaya, becoming freer and more energetic when compared to her expressionless and quiet everyday self, but the Pretty Cure who comes with the most plot points is Asuka, Cure Flamingo. (She looks more like Cure Parrot, unfortunately.) Asuka’s “cool” vibe remains whether she is Asuka or Cure Flamingo, but the fact that she’s a third-year not presently in any of the roughly 900 clubs at the school indicates that she has strained relationships with some of the other students. The most prominent is the student council president, who clearly has a grudge against Asuka, and does her damnedest to prevent the formation of the Tropical Club. But there’s also an implication that she’s got past history with the head of the disciplinary committee, who also have it in for the Tropical Club – yes, Manatsu can be a lot to take, but there’s no real reason for either of these girls to take against the club as strongly as they do.

Unless you count Laura, that is. While none of the girls are particularly good at, or worried about, hiding their real identities from anyone, including the villains, Laura as a mermaid has to keep herself a secret due to the fact that she’s not human. Unfortunately for everyone, she’s impulsive and not very good at hiding, and by episode twelve everyone is talking about a rumored mermaid at the middle school. This is what brings the disciplinarians down on the Tropical Club, but it also brings us to what may well be the second major character arc of the series as a whole: the development of Laura. She’s mostly been playing the role of the mascot character (typically a small, cute, talking animal), but that’s wearing on her, and she’s beginning to feel hurt and frustrated that she can’t participate in all of the girls’ activities. The addition of Kururun, a much more familiar seal fairy creature, drives home the fact that Laura is not just a fairy or healing animal or something similar: she’s a person, and she craves being treated like one. She comes up with an imperfect solution in episode twelve, when she and the rest of the core group are able to use the disciplinary head’s rules against her, but something more very much needs to be done.

Although the villains aren’t particularly threatening thus far – in fact, they’re downright goofy at times – the magical girl action is quite good. Not only are the girls’ transformations very well blended when they transform together, but the differences in their fighting styles and roles are very nicely defined, making the fights feel coordinated and almost choreographed. The use of make-up may feel odd to some viewers, as there’s a tendency to view it as sexualized, but the show takes the stance that it’s for armor and transformation: when you put on make-up, you transform yourself into a different version of you, one who may feel better able to face the world. That’s not a bad takeaway, especially when paired with Sango and Minori’s self-esteem issues, because it offers a coping mechanism. We might not all be able to transform in the same way that they do, but just having a tool to make yourself feel stronger is a nice message to send. That’s what being a Pretty Cure has done for at least two of the girls. I look forward to seeing it happen for Laura too as the series goes forward. 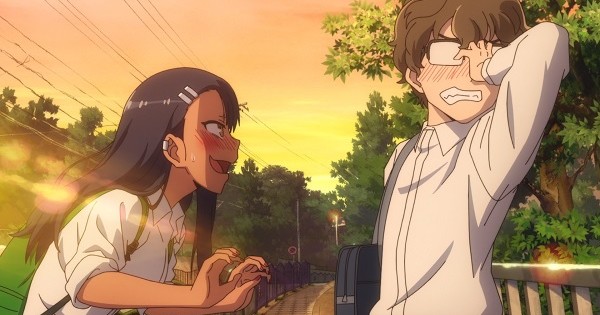 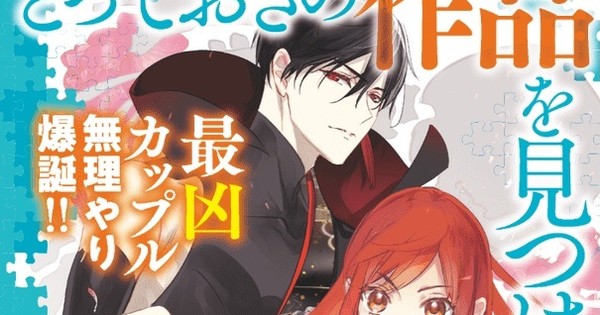 [ad_1] Shouoto ended Otome no Omocha manga last month The July issue of Kadokawa‘s Asuka magazine revealed on Monday that Aya Shouoto is launching a new manga titled Kagetoki-sama no Kurenai Kōkyū (Lord Kagetoki’s Crimson Harem) in the magazine’s September issue on July 20. The magazine teases the manga with the text “The worst and… 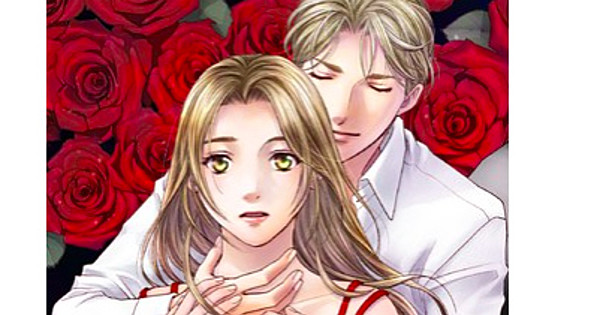 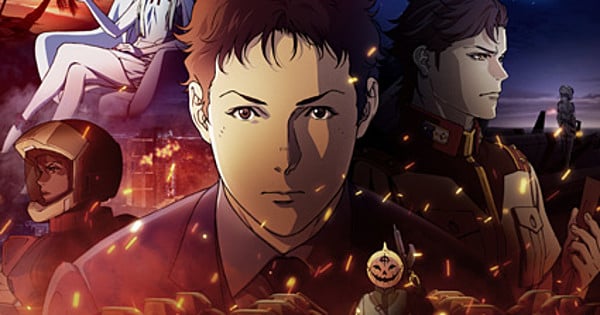 [ad_1] 1st in film trilogy opened in Japan on June 11 Mobile Suit Gundam Hathaway producer Naohiro Ogata confirmed at a stage greeting commemorating the film’s opening last Sunday that the project will have three parts. However, the release frame for the second film has not yet been announced. In addition, he said that “People… 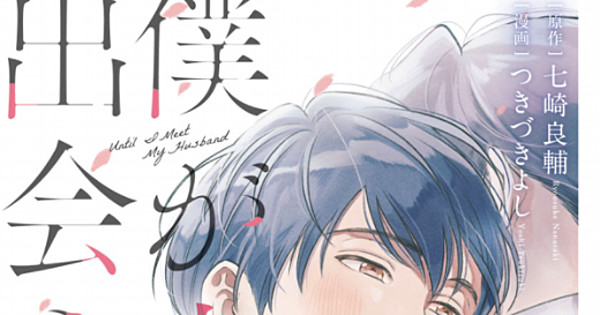 [ad_1] 5 Seconds Before a Witch Falls in Love, The Haunted Bookstore, The Girl in the Arcade manga also licensed Seven Seas Entertainment announced on Monday that it has licensed the Until I Meet My Husband essay novel and manga, the Survival in Another World with My Mistress! light novels and manga, the 5 Seconds… 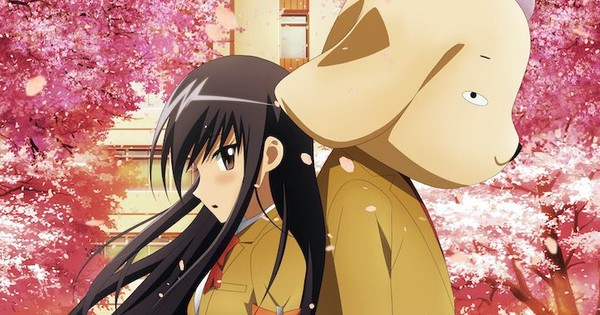