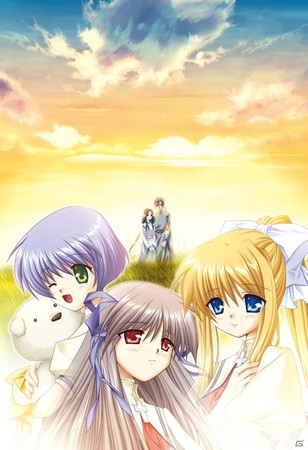 Prototype announced on Wednesday that Visual Arts/Key‘s 2001 Air visual novel will get a port for the Nintendo Switch.

Visual Arts/Key released the original adult visual novel on the PC in 2000, and shipped an all-ages version in 2001. The visual novel has since been ported to the Sega Dreamcast, PlayStation 2, PlayStation Portable, and iOS/Android devices. Prototype published a port for PlayStation Vita in 2016, which introduced the spinoff novel “Hatsuzora no Shō” (New Year’s Sky Chapter), which focuses on Kanna and Uraha, and how they first met.

In the town where summer has arrived, only two children stand to watch a young puppeteer’s show. To his audience, his art is too boring. Losing interest, the children leave.

The young man is a traveler with only two companions on his journey: An old doll that walks without being touched, and a distant promise forced upon him by those who hold “power.” With the sights of summer surrounding him, the days pass by. Again and again, he meets girls bathed in the sunlight. The summer continues on and on forever underneath the blue sky.

The girl waits in the air.