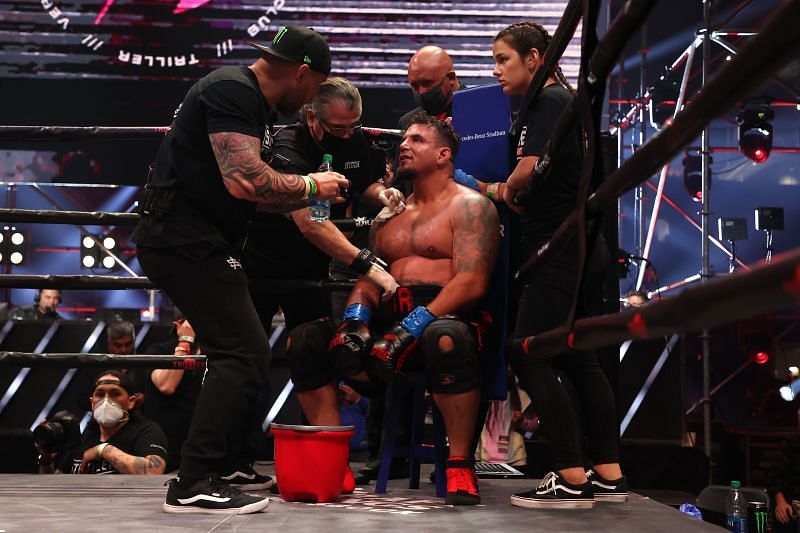 Mir lost the fight via unanimous decision but was able to stretch it to the distance. In between rounds, his daughter, Isabella Mir, was seen in his corner.

Isabella, 17, is also a professional MMA fighter. She made her debut in October last year against Danielle Wynn at iKON FF 2 in Sonora, Mexico. Isabella won the fight comfortably via unanimous decision. She sealed another victory in her second MMA fight opposite Alma Cespedes.

Isabella and Frank apparently train together at their gym. The 17-year-old is currently signed to the iKON Fighting Federation, which is owned by legendary boxer Roy Jones Jr.

Meanwhile, Frank Mir exchanged heavy blows with an opponent for the first time since October 2019. He’d won his last fight against Roy Nelson at Bellator 231.

What went wrong for Frank Mir on his professional boxing debut?

Frank Mir had a 70-pound weight advantage over Steve Cunningham. However, the size difference barely played its part in helping Mir edge past his opponent. At the post-fight press conference, Frank Mir briefly spoke on what possibly went wrong for him. He said:

“My entrance is a too much explode jumping and grappling, which worked great for MMA. I see now it’s harder to pull off in boxing because even when you land one shot, you clinch afterward and look for knees, and bodywork, and takedowns.”

Mir’s last UFC fight was in 2016 against Mark Hunt. He was released from the promotion following his knockout loss to Hunt.

The 41-year-old won the UFC heavyweight championship in 2004 by defeating Tim Sylvia. He is also the only fighter to register a knockout and a submission win over heavyweight legend Antônio Rodrigo Nogueira.